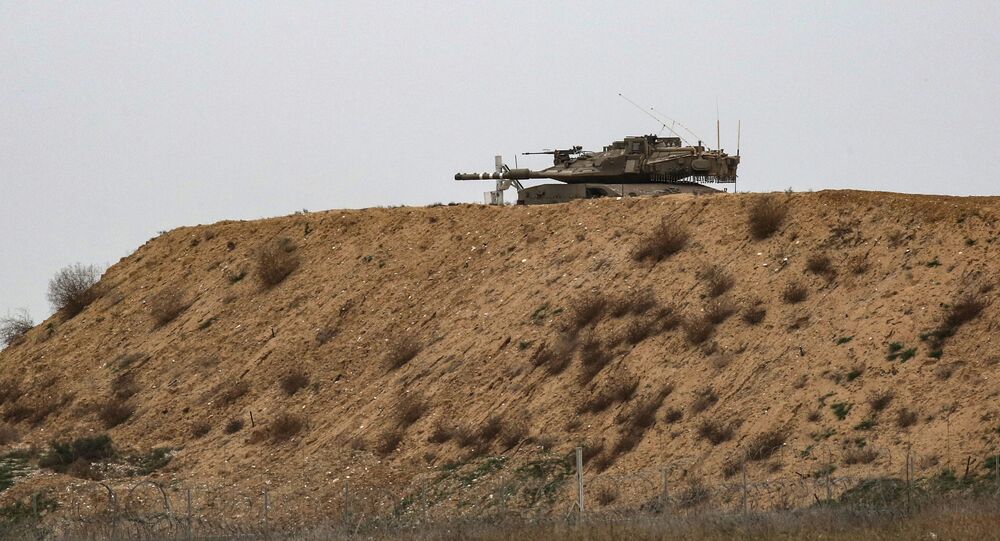 TEL AVIV (Sputnik) - A rocket was fired from the Gaza Strip toward Israel on Tuesday evening, the Israel Defense Forces (IDF) said.

It did not specify where the projectile had landed. According to local media reports, it struck an open field near Kibbutz Nahal Oz on the Gaza border.

There were no reports of any casualties or injuries related to the missile strike. Any caused damage has not been reported as well.

Moments ago, a rocket was fired from Gaza into Israel.

Alleged video footage of what appears to be the rocket has emerged on social media.

CCTV footage of the rocket that was fired from Gaza towards Israel earlier this evening. pic.twitter.com/celIxRS9jE

Most recently, the Israeli army reported that two rockets from the north of Gaza fell in the sea near the city of Ashdod on Monday evening. In response, the air force is said to have struck Hamas military facilities in Gaza.

© REUTERS / MOHAMMED SALEM
Palestinian Groups Fire Rockets Into Sea During Military Drill in Gaza Strip
Israel said Hamas was ultimately responsible for the missile strikes. The group has been locked in a lengthy on-and-off dispute with Israel, which continues to refuse to recognize the Palestinian Authority as an independent political and diplomatic body. Israel holds Hamas responsible for any attack coming from the Gaza Strip.

As COVID-19 Cases in Gaza Continue to Rise, Local Doctor Says Disaster is Just a Matter of Time