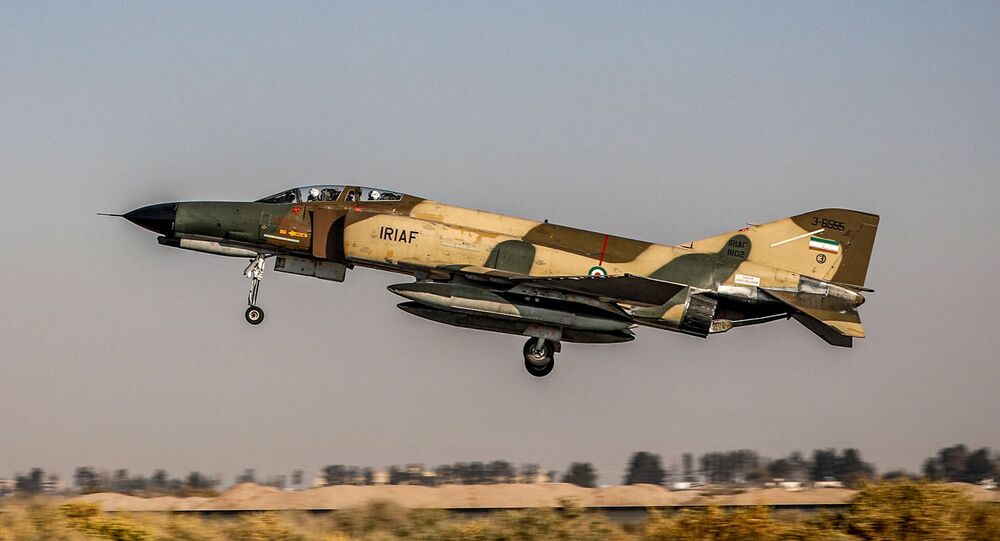 In late December, Iran's Foreign Minister Javad Zarif signalled the Islamic Republic's readiness to defend its "security and vital interests" amid the US military buildup near the country's borders. He accused Washington of wasting hefty sums to repeatedly send B-52 bombers to the region instead of focusing on the fight against COVID-19.

Hundreds of Iranian scientists have urged the country's Islamic Revolutionary Guard Corps (IRGC) Aerospace Force to destroy any US warplanes, especially B-52 bombers, and American warships if they trepass Iran's borders, the FARS news agency reports.

In a letter to IRGC Aerospace Commander Brigadier General Amir Ali Hajizadeh signed by 840 university professors, they reportedly referred to him as the "Conquerer of Ayn al-Asad", in an apparent nod to the IRGC Aerospace Force's missile strikes on a US airbase in Iraq last year.

© Photo : Twitter / @CENTCOM
A screenshot of a video showing B-52 bomber being prepared for the flight at the military base in North Dakota, US

The raids came as retaliation for the assassination of the commander of the IRGC's elite Quds Force, General Qasem Soleimani, who was killed in a US drone strike on his car near the Baghdad International Airport on 3 January 2020.

"The academicians pointed to the United States' empty awe and power which has been magnified by the Western, Zionist, and Arab media outlets, and asked General Hajizadeh to shatter this unreal and fabricated image", FARS cited the letter as saying.

The document comes a week after the American military flew two strategic B-52 bombers to the Middle East from bases in the US, in what was the fourth such deployment and an apparent show of force by the US Air Force.

"The aircrews flew a 36-hour, non-stop mission from the 5th Bomb Wing's home at Minot Air Force Base, N.D., to the Arabian Gulf and back to send a clear deterrent message by displaying the ability to deploy overwhelming combat power on short notice", an Air Force statement said at the time, referring to "increasing levels of readiness across Iranian defensive systems".

The statement followed President Donald Trump directing acting Secretary of Defence Christopher Miller to reverse course and order a US aircraft carrier to return to the Middle East earlier in January.

This was preceded by Iranian Foreign Minister Javad Zarif in late December pledging that Tehran "will openly and directly defend its people, security and vital interests" amid the US military buildup near its borders.

He tweeted that he had received intelligence from Iraq of a "plot to fabricate [a] pretext for war [against the Islamic Republic]". Zarif also accused the US of wasting "billions [of dollars] to fly the B52s and send armadas to our [Middle Eastern] region" instead of focusing on fighting the COVID-19 pandemic.

In another development in December, the US Navy announced that an Ohio-class nuclear-powered submarine, the USS Georgia and accompanying cruisers had crossed the strategically important Strait of Hormuz. This followed Washington deploying a missile submarine with up to 154 Tomahawk cruise missiles on board to the Persian Gulf.

© REUTERS / KHALED ABDULLAH
Iran's Ultimate Revenge for Soleimani's Murder Would be US Military Expulsion From Mideast, Analyst Says
Washington earlier accused Iran of staging last month's rocket attack on the US Embassy compound in Baghdad, allegations that were denied by the Islamic Republic, which has repeatedly pledged to take full-fledged revenge for Soleimani's assassination, adding that the January 2020 missile attack was just a "slap".

The general's killing further escalated tensions between Tehran and Washington, on the rise since May 2018, when President Donald Trump announced America's unilateral withdrawal from the 2015 Iran nuclear deal, also reinstating harsh economic sanctions against the Islamic Republic.