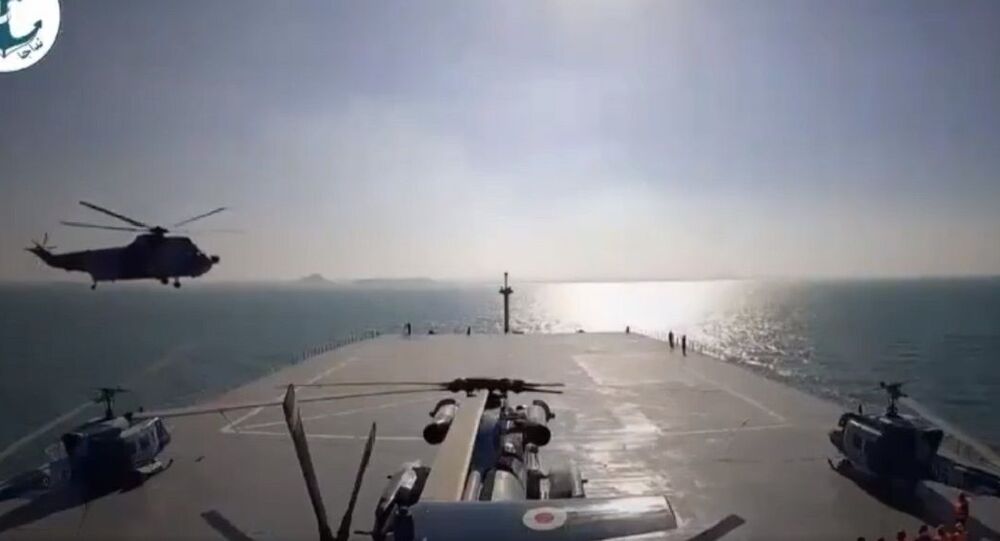 On Monday, Rear Admiral Alireza Tangsiri, the commander of Iran's Islamic Revolutionary Guard Corps (IRGC)'s Navy, claimed the Islamic Republic is in "full control" of the Persian Gulf, in a statement that came amid increasing tensions between Tehran and Washington.

Two advanced domestically-made warships have entered service with the Iranian Navy's southern fleet in the Gulf of Oman, near the strategically important Strait of Hormuz, the country's Mehr news agency reports.

One vessel is the missile-launching high-speed corvette Zereh, equipped with sophisticated weaponry "to enhance the Navy's combat capabilities" in the Islamic Republic's southern waters, according to Mehr.

Another is the 231-meter-long helicopter carrier Makran, which is capable of carrying up to seven copters and a number of unmanned aerial vehicles on board.

Video:#Iran Navy fleet in the Sea of Oman took delivery of a new homegrown helicopter carrier "Makran" as well as a missile-launching warship “Zereh” (Armor).

This is the latest in a series of deployments of Iranian-made military hardware, including warships, drones, and missiles against the backdrop of increasing tensions between Tehran and Washington.

The deployment of the two warships comes after Iranian naval chief, Rear Admiral Alireza Tangsiri, on Monday declared that the Islamic Republic "has full control" of the Persian Gulf and that it "dominates the entire waters".

Tangsiri insisted that the US "has no option but to withdraw from the Gulf region", which he said is "home" to Iran and "Muslim countries on the southern rim" of the area.

The remarks followed Tehran last week revealing the existence of a new top-secret underground missile base belonging to the IRGC Navy, which IRGC Commander-in-Chief Hossein Salami said was "one of several bases housing the Guards' Navy's strategic missiles".

In a separate development last week, satellite images released by the private US company Planet Labs captured what looks like a "cluster" of activity by IRGC ships in the Strait of Hormuz.

Located between the Persian Gulf and the Gulf of Oman, the strait is a crucial channel that oil producers use to transport crude from the Middle East to markets around the world.

In December, Iranian government spokesman Ali Rabiei warned the US against "extraterritorial adventurism" that he argued is aimed at militarising the Gulf, in a statement that was preceded by the US Navy saying the Ohio-class nuclear-powered submarine USS Georgia and accompanying cruisers had crossed the Strait of Hormuz.

© AP Photo / Vahid Salemi
Iran Urges US to Cease 'Extraterritorial Adventurism', Warns Against Persian Gulf's 'Militarisation'
Also in December, the US deployed a missile submarine with up to 154 Tomahawk cruise missiles on board to the Gulf, after Washington accused Iran of staging a rocket attack on the US Embassy compound in Baghdad, allegations that were vehemently rejected by the Islamic Republic.