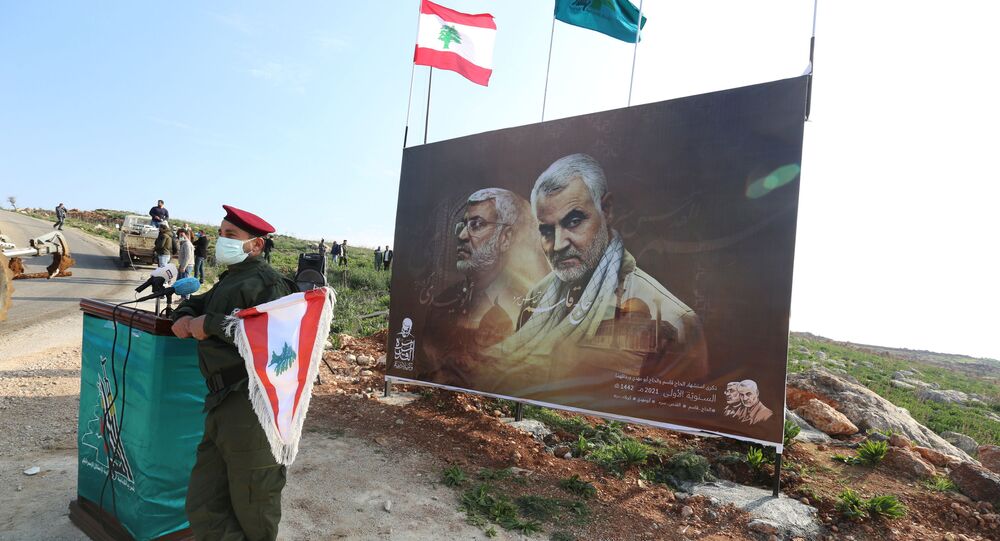 Sunday marked the first anniversary of the assassination of top Iranian general Qasem Soleimani, who was killed in a US drone strike near the Baghdad International Airport on direct orders from President Donald Trump.

Iranian Foreign Minister Javad Zarif has described the Middle East region commemorating the first anniversary of General Qasem Soleimani's killing as "a reminder" that Daesh* remains "the only beneficiary of his murder".

"A year ago today, Enemy Number One of extremist terrorists was cowardly assassinated by the terrorist-in-chief", Zarif noted in a tweet on Sunday, an apparent nod to President Donald Trump, who authorised a US drone strike on the head of the Islamic Revolutionary Guard Corps (IRGC)'s elite Quds Force on 3 January 2020.

A year ago today, 𝘌𝘯𝘦𝘮𝘺 #1 of extremist terrorists was cowardly assassinated by the terrorist-in-chief.

As our region solemnly commemorates his one year passing, a reminder that the only beneficiary of his murder is Daesh (ISIS), which has only increased its activity since. pic.twitter.com/bt8pgDvXar

'Champion of Fight Against Terrorists'

The tweet came as the Iranian foreign minister praised Soleimani in a televised interview, where he specifically lauded the IRGC general as a person "who always worked in the field of peace and negotiation".

"I truly consider him not just a champion of the fight against terrorists, but also a hero in peace-making efforts", Zarif underlined, also touting Soleimani's role in helping Kabul "shape a new future for Afghanistan in the years to come",

As commander of the IRGC's elite unit responsible for extraterritorial operations, Soleimani was known to be involved in an array of anti-terrorism operations across the Middle East. He briefly joined the US in its fight against the Taliban* in Afghanistan in 2001, and he also assisted the Syrian government in its fight against jihadists in the 2010s.

Separately, the top Iranian diplomat revealed that Soleimani used to tell him "he was waiting for a bullet, and he thought he'd be shot on the battlefield".

"He would never think the Americans may hit a car in the mid-night in such a way. It was an easy job to hit that car. […] It really shows Trump's misery and cowardice", Zarif said, adding that Washington was "terrified of" Soleimani, perceiving him as "a genius in the battlefront".

"He was a genius who had defeated them in Syria and Yemen", the foreign minister concluded.

The interview came after the Iranian Foreign Ministry on Friday slammed Soleimani's assassination as a "craven act of terror", pledging that the Islamic Republic will "not rest" until it brings the people responsible for the assassination to justice.

The Foreign Ministry further stressed the drone strike that killed Soleimani is itself a blatant violation of international law, as well as the sovereignty of Iraq, where the attack was conducted.

© AP Photo / Qassim Abdul-Zahra
Ayatollah Khamenei Hints Iran Yet to Strike ‘Reciprocal Blow’ Against US Over Soleimani Killing
Iran has repeatedly signalled its readiness to do more to avenge Soleimani's killing, stressing that ballistic missile strikes on US bases in Iraq on 8 January 2020 were just the "first slap" of vengeance.

The strikes did not result in any deaths or serious injuries, but the Pentagon has since reported that at least 109 US servicemen have been diagnosed with traumatic brain injuries.

The developments escalated simmering tensions between Tehran and Washington that have been in place since 8 May 2018, when President Trump announced Washington's unilateral withdrawal from the 2015 Iran nuclear deal, also known as the Joint Comprehensive Plan of Action (JCPOA), and reinstated crippling economic sanctions against Tehran.

*Daesh (ISIL/ISIS/Islamic State), Taliban, terrorist groups banned in Russia and a number of other countries