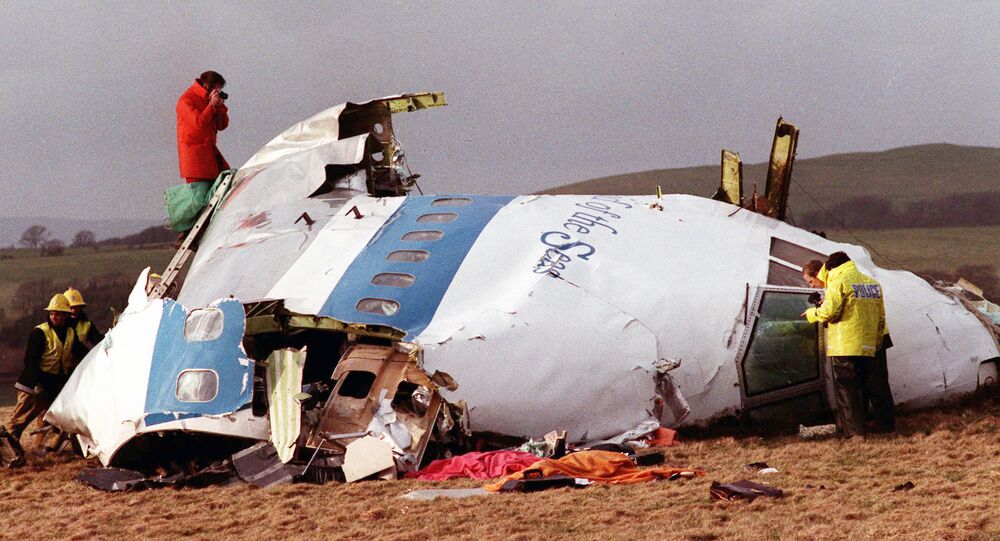 In December 1988, Pan-Am Flight 103 exploded over the Scottish town of Lockerbie en route from London to New York, killing all 259 people on board, including 190 Americans, as well as another 12 on the ground. The US accused Libya of the attack. Recently, the US Justice Department charged a new Libyan individual in relation to the terror attack.

John Holt, a former CIA operations officer in the Middle East, claims that “the true perpetrator” of the 1988 bombing of a Boeing 747 over the Scottish town of Lockerbie while en route from London to New York, was Iran, instead of Libya, and has called for holding the Islamic republic accountable.

Holt, a long-time handler for Abdul Majid Giaka – a key US government witness in the Lockerbie trial conducted at The Hague in 2000, said that he has been “telling the CIA and FBI since being interviewed by them in early 2000” that he, along with “many other intelligence officers do not believe” that Tripoli was responsible for the bombing, which killed everyone aboard, including 190 Americans.

“As a former CIA operations officer, I am breaking 20 years of silence about one of the most heinous plane bombings on record, Pan Am flight 103 over Lockerbie, Scotland on December 21, 1988,” Holt wrote in an op-ed published by The Times of Israel on Sunday. “Iran, as the original evidence clearly showed, is the true perpetrator of this deadly attack and should be brought to justice.”

The professor of political science suggests that the US government’s key witness in the Lockerbie trial, Libyan agent Abdul Majid Giaka, “knew nothing” about the Libyan government’s alleged involvement and “never provided any evidence pointing to Libya”.

“I know Libya is not behind the bombing because I was the long-time handler for the principal US government witness Abdul Majid Giaka, a Libyan agent who never provided any evidence pointing to Libya or any indication of knowing anything about that nation’s involvement in the two years after the bombing,” Holt said. “The US government prevented my testimony and hid from evidence the cables I wrote that proved Giaka knew nothing.”

© AP Photo / Scott Heppell
A member of the public looks at the main memorial stone in memory of the victims of Pan Am flight 103 bombing in the garden of remembrance at Dryfesdale Cemetery, near Lockerbie, Scotland, Saturday, Dec. 21, 2013. Pan Am flight 103 was blown apart above the Scottish border town of Lockerbie on Dec. 21, 1988. All 269 passengers and crew on the flight and 11 people on the ground were killed in the bombing.

The US Department of Justice announced recently that two new charges had been filed against Abu Agila Mohammad Masud, who prosecutors allege built the explosive device that downed Pan Am Flight 103. Holt has argued that US intelligence “have not even” interviewed the suspect themselves. Rather, he claimed, they “entirely” rely on “an 8-year-old statement by an unnamed Libyan police officer” in the midst of a civil war in the country.

“Moreover, Masud had no history or signature for making the type of bomb that brought down Pan Am 103 nor for concealing bombs in Toshiba radios,” the ex-CIA agent wrote.

Holt added that the Tehran-backed Popular Front for the Liberation of Palestine - General Command (PFLP-GC) is known for building such explosive devices.

“It is time to drop the routine CIA procedure of embellishing intelligence reporting to fit a preconceived outcome rather than following the facts,” Hold suggested. “The families of Pan Am flight 103 victims have suffered long enough and deserve to now be able to rest assured that the real perpetrators of this act of terrorism, Iranian actors, are brought to justice.”

Holt called for the US government to “reexamine” the Lockerbie case “due to the availability of evidence against Iran”.

“Why was credible evidence pointing toward Iran ignored, given Iran’s clear motive for the attack as retaliation for the downing of a civilian Iran Air Airbus and its proven capacity to carry out attacks similar to the bombing over Lockerbie?” the former CIA operative suggested.

In early December 2020, the retired intelligence agent made similar statements, claiming that “there was a concerted effort” aimed at distracting the attention of investigators in the Lockerbie bombing case from Iran, the “true culprit”. Holt suggested at the time that the US government’s main witness had a history of “making up stories”.

“I have reason to believe there was a concerted effort, for unexplained reasons, to switch the original investigations away from Iran and its bomb-making Palestinian extremist ally the PFLP General Command. Now we should focus a new investigation on the Iranians and their links with the bomber,” Holt told The Telegraph in an interview.

On 21 December 2020, outgoing US Attorney General William Barr announced new charges in the decades-old Lockerbie case, against Abu Agila Masud, for allegedly making the bomb used to destroy the aircraft. The Justice Department charged the Libyan national, who is serving a separate 10-year sentence in Tripoli, with counts of destruction of aircraft resulting in the death and destruction of a vehicle used in interstate or foreign commerce by means of an explosive, resulting in death.

In November 1991, two Libyan nationals - Abdel Baset al-Megrahi, a Libyan intelligence officer and head of security for Libyan Arab Airlines, and Lamin Khalifah Fhimah, LAA’s station manager at Luqa airport in Malta – were charged in relation to the Lockerbie bombing. In 2000 al-Megrahi and Fhimah went on trial, under Scottish law, at a special court in the Netherlands.

Al-Fhimah was acquitted but al-Megrahi was found guilty and given a life sentence in prison. However, in 2009, al-Megrahi was ultimately handed a compassionate release after he was diagnosed with cancer. He died three years later.