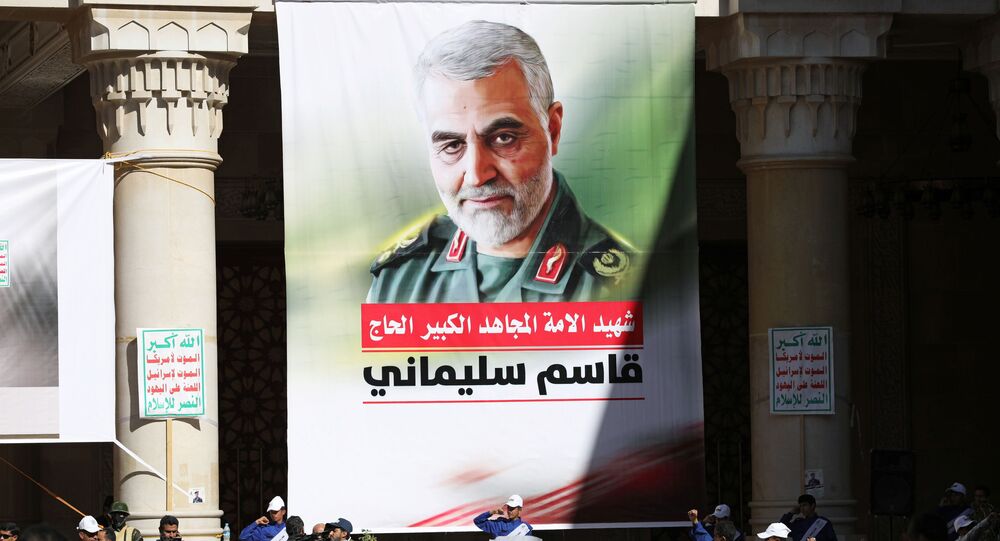 One year after the assassination of Qasem Soleimani, Iranians are still angry with the US, says a Tehran-based expert. And although the country did respond to the murder with missile strikes on US bases in Iraq, the real response, he says, is still to come.

It's been a year since a US drone strike killed Qasem Soleimani, a top commander of Iran's Islamic Revolutionary Guard Corps. Mohammed Marandi, a political analyst from the University of Tehran, says the people of his country are still grieving the assassinated general.

"Iranians are angry today, just as they were a year ago, when he was murdered", he says.

© REUTERS / Wana News Agency
FILE PHOTO: An Iranian man holds a picture of late General Qassem Soleimani, head of the elite Quds Force, who was killed in an air strike at Baghdad airport, during a gathering to mourn Soleimani in Tehran, Iran January 4, 2020.

For Iranians, Soleimani was a celebrated and devoted soldier, loyal to the government.

© AP Photo / UNCREDITED
Iran Vows US Will Be Brought to Justice Over 'Craven Act of Terror' Against General Soleimani
But for Israel and its allies, he was the one who allegedly helped build and train militias in the Middle East to threaten the Jewish state. Tel Aviv claims that Soleimani, who was the Quds Force commander, sent reinforcements to Syria to fight with forces loyal to President Bashar al-Assad, and Iraq to fight against Daesh*, al-Qaeda*, and their affiliates. Iran has denied deploying troops to Syria, saying they only sent military advisers there.

Solemani's achievements were so numerous and his importance so obvious that his assassination triggered a number of articles and analyses suggesting Iran would never be able to recover following his demise. But Marandi says his country "is not dependent on individuals".

"When [Ayatollah] Khomeini passed away in 1989, so-called western experts and pundits claimed that the revolution in Iran was over, because he was such an influential figure and they thought he couldn't be replaced. But what they fail to understand is that Iran has structures and institutions; we have very competent and educated people, who know what they are doing, and nothing will change in Iran, even after [a general of this magnitude] is gone", Marandi states.

Following Soleimani's assassination, Iran promoted Esmail Ghaani to commander of the Quds Force, and although his abilities were downplayed somewhat in the West and in the region, Marandi is certain that he will continue the path of his predecessor.

That path also presupposes revenge directed at those who spilled the blood of the top Iranian commander.

Shortly after Soleimani's assassination, Iran retaliated against two American targets in Iraq, where the senior general was killed, launching multiple missiles at US bases in Erbil and the Al Anbar Governorate.

At the time, President Donald Trump claimed the measure was minor and insignificant but operation Martyr Soleimani did expose American vulnerability, and Marandi says it was just one response to "the murder of Soleimani".

"All our missiles reached their targets and the damage was major. But it was only a response, not the response, while our ultimate response will be that the Americans will be expelled from Iraq, Syria, and Afghanistan", Marandi contends.

In a way, it is already happening. In 2019, Trump announced the withdrawal of some American troops from Syria and this September, Washington declared that it would reduce the amount of its military personnel in Iraq from 5,200 to 3,000 soldiers.

© REUTERS / THAIER AL-SUDANI
Video: Crowds of People Flock to Baghdad Int'l Airport to Commemorate Anniversary of Soleimani Killing
In November, another report suggested the US would pull out 2,500 soldiers from both Iraq and Afghanistan.

The continued pullout might be an indication that Washington is not interested in further escalating tensions and Marandi is certain it is also connected to the American realisation that "Iran is too powerful of a player that cannot be defeated in a conventional war".

"Iran is not like Iraq or Afghanistan. It is a very powerful country and the Americans know that", explains the expert.

What they also know is that with Trump's days in office numbered, the new US administration will need to work hard to repair the damage caused by the assassination of General Soleimani.

President-elect Biden has already vowed to return to the negotiating table with the Islamic Republic and restore the nuclear deal, but for Marandi the new US administration is no guarantee for better ties.

"It doesn't matter who the president of the US is. Their attitude doesn't change with the change of presidents. And unless Washington alters its behaviour fundamentally and begins to behave like a normal country, Iranians have no other option but to show strength because this seems to be the only thing that the Americans know to respect", Marandi says.

*Daesh, also known as ISIS/IS/Islamic State, and al-Qaeda are terrorist groups banned in Russia and beyond.