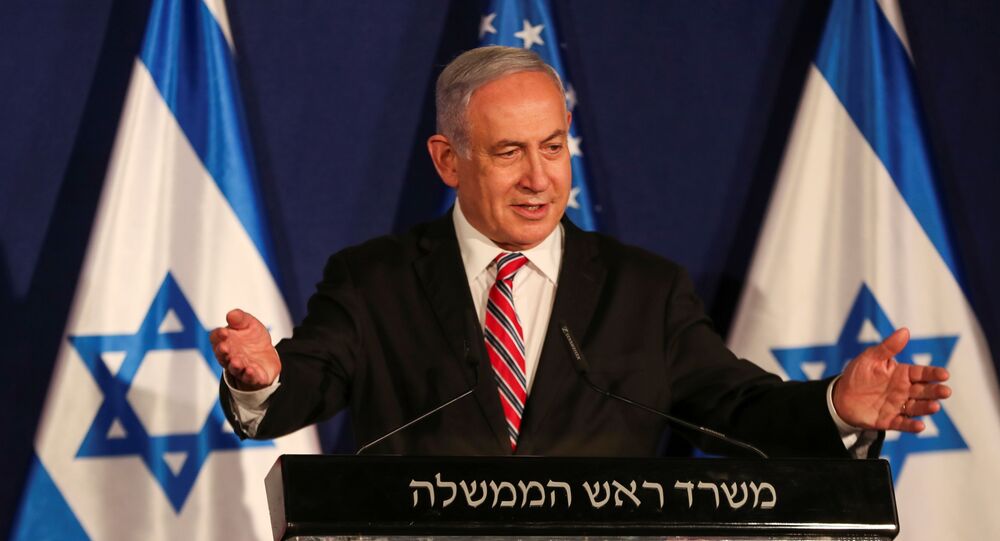 The Israeli Prime Minister's party would get 28 seats in the Knesset (Israeli legislature) if elections were held today, a media poll revealed. This is in stark comparison to their performance in early March, when Netanyahu's Likud party secured 36 seats in the chamber.

An Israeli poll released on Friday shows that Prime Minister Benjamin Netanyahu's Likud party is sinking, projecting that it would only get 28 out of 120 seats in the parliamentarian race set for 23 March.

Netanyahu’s main challenger, Gideon Saar, is right behind him with 19 seats, but Mitchell Barak, one of Israel's savviest pollsters and a communications professional, says Israeli polls are far from the most accurate.

"These are not serious surveys", he explains, referring to media polls released in Israel on a weekly basis. "I wouldn't rely on them."

Barak is far from being the only Israeli expert to warn about the inaccuracy of these political polls.

In 2006, the Israel Democracy Institute published an article explaining the magnitude of the problem. In February of that year, the country went to the polling stations and mass media was publishing at least one poll a day, making assumptions and providing analysis, most of which was later proven wrong.

© AFP 2020 / ADINA VALMAN
'Can Somebody Find a Vaccine For This?' Tweeps Unamused as Israel Gallops Towards Fourth Election
Years later, in 2019, another report suggested that polls in Israel were inaccurate, but this and similar reports had been largely ignored.

The result was that in 2015, following a parliamentarian race, Israel went to sleep with Isaac Herzog as its prime minister only to wake up to find out that the polls were wrong, with Benjamin Netanyahu swiftly taking office.

Barak, who back then predicted accurately that Netanyahu would win that race, attributes the failure of Israeli polls to a number of factors.

"They don't ask about the voting history [of those quizzed - ed.] and they don't go inside the issue," he said over the phone.

Nor do they adhere by the rules set by the Israeli legislation. In 2002, the Jewish state amended its elections law, ruling that anyone who published a survey had to provide the audience with such information as who ordered the poll, the number of participants, the actual number of samples, statistical error margin and even the wording of some of the questions.

But Israeli media largely ignores these demands set by the law, very often publishing information that has nothing to do with reality.

Part of the problem, says Barak, is the Israeli media's low budgets.

"A serious survey would cost anything between $20,000 to $30,000. The Israeli media cannot afford it. I know their budgets, they can only spend around a thousand dollars per poll."

In a country where every news item has political connotations, where there are no political debates and where the public is obsessed with parliamentarian races, Barak's comments make sense. But the repercussions of these hasty polls that often don't relate to reality are alarming.

© REUTERS / Yoav Dudkevitch/Yedioth Ahronoth/Pool
As Elections in Israel Draw Near, Netanyahu Counting on Ultra-Orthodox Parties for Support
The above-mentioned Israel Democracy Institute's article tried to explain the problems such polls can cause.

Aside from providing the public with false information, these surveys change "the quality of the political discourse" and put emphasis on the races of individuals, not on the competition of ideas, values and ideologies.

The upcoming general polls won't be any different. Surveys portraying doom and gloom for the PM and a bright future for his challengers are released on a weekly basis already, and as Israel gets closer to the D-day, their frequency will grow; however, their accuracy will not.

"Israel is a very dynamic place. We have three months till elections. Between now and then many things can happen, be it security situation or [another] COVID-19 outbreak. So what might be true now, will not be accurate later, and people will not make up their minds now. They are likely to decide closer to the date."