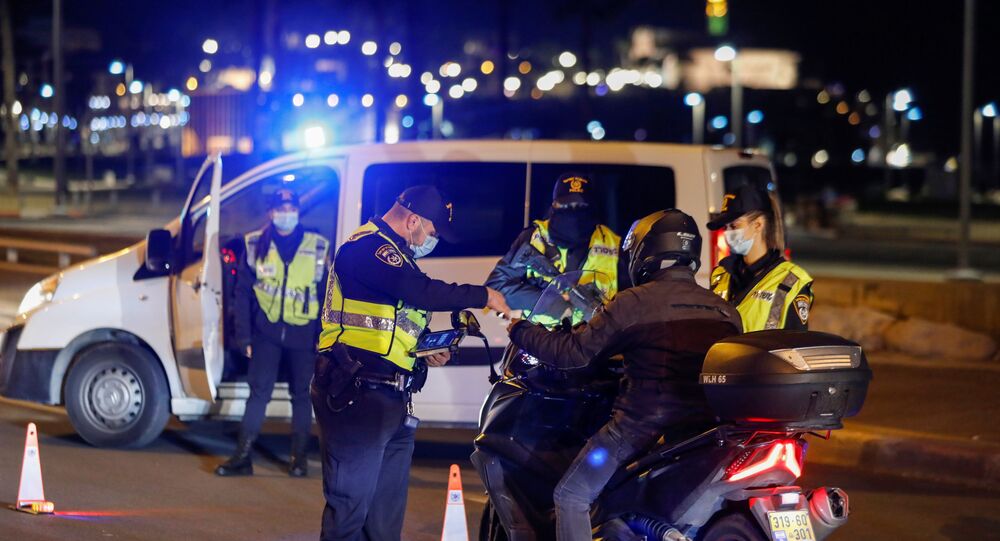 The lockdown that started on Sunday at 5 p.m. local time will last for at least two weeks during which public institutions and private businesses will be closed, while public transportation will be limited. Israelis will not be allowed to travel more than a thousand metres from their homes except for essential matters.

Tel Aviv's usually bustling streets are relatively empty again following the imposition of a third lockdown in Israel to curb the spread of COVID-19 that has already claimed the lives of more than 3,000 people.

As of 5 p.m. local time on Sunday, private businesses shut their doors, and so did public institutions. The educational system has now been restricted, with many students studying from home and public transportation being reduced to 50 percent capacity.

The lockdown is set to end on 9 January but authorities have already stated that it might be prolonged if the daily infection rate doesn't drop below a thousand new cases.

For many Israelis this has the feeling of deja vu, with some taking to social media platforms to vent their anger at the government for supposedly not doing enough to stop the spread of the virus and for imposing an unnecessary lockdown.

"...four election campaigns in two years that will cost Israel, plus minus, some three billion NIS [around $1 billion - ed.]. And [our] politicians keep attending TV studios as if they were rockstars. Without any conscience, morality, or mental reckoning. Hard questions are not asked. And there are no debates", wrote one user.

Another pointed the finger at Israel's Prime Minister Benjamin Netanyahu, who allegedly didn't prevent what some see as the financial collapse of the country.

"What kind of achievements did he bring?", asked a netizen, responding to a tweet by the PM's Likud party that enumerated Netanyahu's achievements. "He only brought about a third lockdown and a million unemployed. Stop lying".

Israel's economy has been hit hard by the pandemic. By November, 65,000 small and medium businesses had already shut down, and estimates suggest that number will reach 80,000 by the end of the year.

The unemployment level also continues to rise and in October, more than 800,000 Israelis or over 20 percent of the country's population were still jobless.

However, not everyone blamed the government for the nation's dire economic and health situation. Some users posted video clips and photos, depicting the careless behaviour of the public that helped in large part lead to the current crises.

"The third lockdown has come and it will be a long one because of these privileged people", wrote one netizen in reference to dozens of youngsters, who made use of the sunny Saturday before the lockdown to gather and cycle around Tel Aviv, without adhering to social distancing and without wearing masks, as requested by the Ministry of Health.

"Do you want to know how we got here? Have a look at these celebrities, who couldn't care less about the regulations set by our government", complained another user, who posted a photo showing a group of people not wearing masks.

These were far from being the only instances caught on camera. Since the outbreak of the pandemic in mid-March, the Israeli media has registered dozens of such incidents, showing mass gatherings and weddings that took place despite restrictive measures.

But Israel is not sitting idly by watching the situation spiral out of control. Authorities have imposed heavy fines on anyone caught breaking the rules, but despite those measures law enforcement agencies have been struggling to maintain order.

Israel, meanwhile, is moving forward with its mass vaccination programme. So far, nearly 300,000 people have been vaccinated in the country, since the programme began a week ago.

Netanyahu is now saying the aim is to provide 150,000 inoculation doses daily, something that would allow Israel to become the first country in the world to vaccinate its entire population.

And for many on Twitter, this is the right way forward.

"The liar [Yair Lapid - head of opposition]... was doubting the ability of our elected leader to bring vaccines to the Jewish state. Now he is eating his sombrero".

"I do not like the way Netanyahu manages his friendships. Nor do I appreciate the fact that he violates agreements. But he brought us f***** vaccines and thereby saved people's lives. Therefore, I will not choose him as a friend but I will definitely elect him as prime minister".