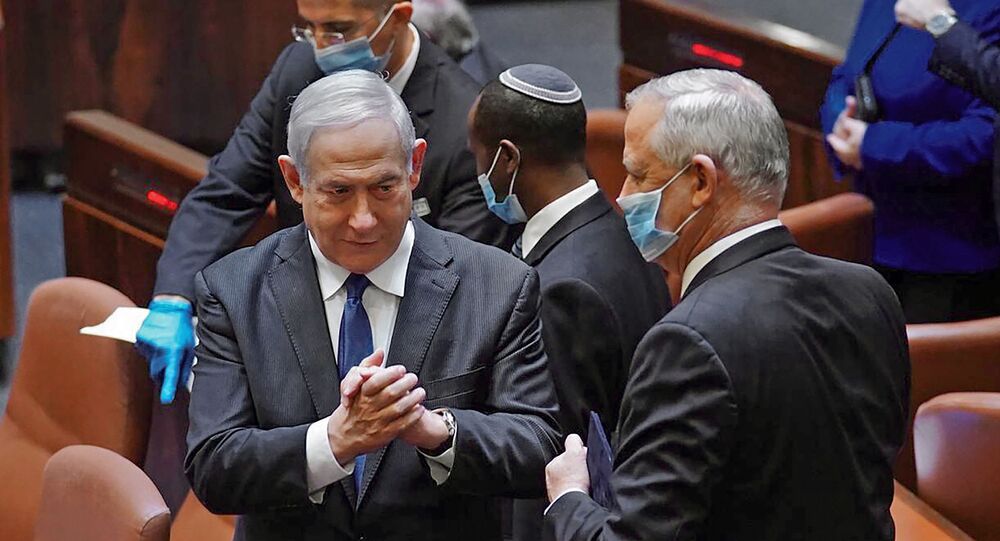 'Can Somebody Find a Vaccine For This?' Tweeps Unamused as Israel Gallops Towards Fourth Election

Both the Israeli PM and his defence minister are interested in avoiding dragging the country to another round of pricy general polls, but the bill on the national budget failed to collect the necessary amount of signatures at the Knesset. And that means that if no miracle occurs, the chamber will dissolve at midnight.

Up until Monday night it seemed that Prime Minister Benjamin Netanyahu had managed to achieve his goal and could prevent Israel from launching another round of general polls.

Elections in the Air

On Sunday, after frantic talks with his coalition partner Benny Gantz, the two reached an agreement, according to which the passing of the national budget -- the deadline for which is midnight -- would be pushed to 5 January.

But on Monday, that agreement went down the drain, with Netanyahu tweeting that his defence minister had backtracked on his promises.

​Following the disagreements with the Blue and White, the motion that proposed to postpone the decision on the national budget to January, was rejected by 49 parliamentarians; 47 supported the bill.

The practical meaning of this is that if a solution is not found by midnight, the Knesset will dissolve itself automatically and Israel will go to the polls again, for the fourth time in fewer than two years.

The official date for the general polls would be 23 March and the idea of yet another parliamentarian race has already stirred debates on social media networks.

Some tweeps have already expressed their optimism about the upcoming general vote.

"Thank God we are going to elections now," wrote one tweep.

​Another one posted a photo of a bottle of beer and signed it with: "happy elections day".

"It is time to give the mandate back to the people and dissolve the most failing and horrible government that Israel has seen since the moment of its establishment. Israel deserves a different prime minister and a different kind of leadership. Elections now," wrote another tweep.

​The reason for this determination to go to the polls again is clear. The raging coronavirus, that has already claimed the lives of more than 3,000 Israelis, has also dealt a severe blow to Israel's economy.

In October, the number of unemployed stood at more than 800,000 people, slightly over 20 percent of the entire population. Food prices rose as the number of people living in poverty and those seeking state assistance rose.

Although Netanyahu's government did offer solutions, giving out assistance packages to individuals and businesses that were hurt during the pandemic, a July poll found that 62 percent of those quizzed were dissatisfied with the way the PM was handling the economic crisis. 49 percent said they disliked the way the health emergency had been tackled.

The dire economic crisis coupled with a tough health situation have triggered mass demonstrations against the PM and those continue to take place on a weekly basis, blaming the "corrupt" prime minister for the country's mess and urging him to relinquish power.

Yet, there are also those, who seem to be concerned with the looming elections.

"A fourth round of national polls. Can somebody find a vaccine for this already?" one tweep wrote.

​"How can you [possibly] want to go to elections now? I am not a Likud loyalist. Nor am I supportive of the Blue and White and I wish we could have had a different government. But this is what we have. The situation in the country is not good. The pandemic is raging and they are talking about a new virus. There is no budget and another round of elections might be a disaster. That's the government we have now and this is what we have to win with."

​Others expressed their concern that another national vote might not even yield a clear-cut result and would only end up wasting more than $1 billion of Israeli taxpayers' money.

"I have to make it clear... if this craze of 'just not Bibi' does not stop, this won't be the last round of national polls."

"It is true that we have a government within government," said one Twitter user, referring to the friction between coalition partners. "...but those who [claim that] they want those elections so badly... have they received a guarantee that this time around there will be a [clear-cut] decision? If yes, where do I sign up? I want that too."

​Previous rounds have failed to produce such a result and given that the country is still largely divided and the number of parties that will take part in the race will most likely exceed 40, the chances that Israel will have a prime minister at the end of March are low, if not non-existent.

There are good reasons to believe that neither Netanyahu, nor Gantz want this elections to take place. Each for his own reasons.

For Benny Gantz, another general vote might mean the end of his political career, especially given the fact that recent polls predict his Blue and White party would get five out of 120 seats in the Israeli parliament, barely passing the threshold.

© REUTERS / POOL
Early Elections Loom in Israel Amid Gantz-Netanyahu Coalition's Possible Divorce
For him it also means that he would never become a prime minister, a title that he is supposed to receive in November 2021, when Netanyahu and Gantz swap roles as per their coalition agreement reached in May.

Netanyahu seems to share Gantz's interests. Just like his defence minister, he doesn't want to drag the country into the polls that could aggravate the economic crisis and anger the masses.

However, and more importantly, he is wary of the results this round might produce and he knows that his rivals will not make it easy for him to win that race.

And now as the clock is ticking, with the Knesset set to dissolve at midnight, Netanyahu will need to make compromises or face another parliamentarian race that might result in a knock-out.