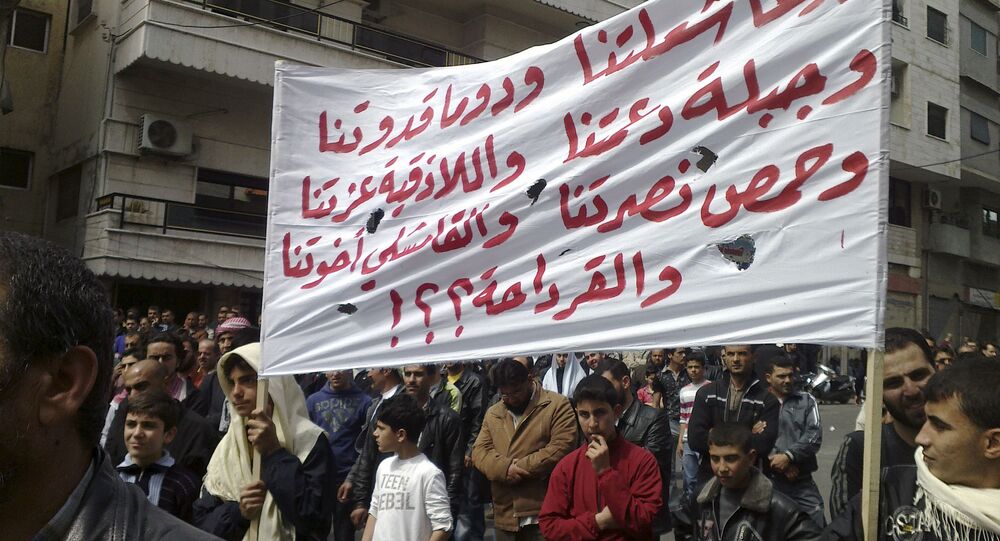 A destabilising civil war erupted in Syria in 2011. Now, nearly ten years later, the future still looks bleak, and a local journalist says the chaos will only end if foreign intervention stops and western sanctions are lifted.

In 2010, when the Arab Spring erupted in Tunisia, leading to the ouster of its longtime President Zine El Abidine Ben Ali, and then spilled over into Egypt, many were certain that Syria would not escape a similar fate.

But for Haider Mustafa, a Syrian journalist and editor-in-chief of the Cham Times Media Network, the outbreak of mass protests in Syria was a total surprise.

"The situation in Syria was better than in other countries of the region", says Mustafa, recalling the days before the revolution.

"The Syrian people were not that interested in politics. They did not embrace the logic of revolution. Nor did they want to change the so-called regime. Quite the opposite was true: the government enjoyed widespread support in the streets of Syria".

Bashar al-Assad, who in 2010 marked his tenth anniversary in power, was viewed as a reformer in Syria.

© AP Photo / Francois Mori
Unneeded Arab Spring: Eyewitness Recalls the Downfall of Once-Wealthy Libya 10 Years Down the Line
During his first years in office, he opened many schools and universities, established a stock exchange and permitted competition in banking and trade.

On the political front, he released several thousand prisoners jailed for their views, and even gave more leeway to the country's opposition.

The largely fragmented and leaderless oppostion, however, did not stand a chance against the organised apparatus of the Syrian government headed by Assad. That is, until the eruption of the Arab Spring, when Mustafa says "the unthinkable happened".

Initially, demonstrators voiced legitimate demands in the mass protests that erupted in March 2011.

Just as was the case in other Middle Eastern and North African countries, Syrians were urging their government to introduce a series of political, social, and economic reforms.

Yet, Assad refused to budge and his government moved to suppress the protests. At the time, reports suggested that dozens had been killed, with scores of others injured, detained, or jailed.

"Very quickly Syria found itself on a battlefield", recalls the journalist, adding that the masses responded with force to the crackdown on protesters.

"Religion and the sectarian factors were used as a means of aggravation, people were easily incited and manipulated and that only led to more violence", explains Mustafa.

As protests showed no signs of abating, reports of foreign fighters and extremists, who started to engulf Syria in a bid to put an end to the government of President Assad, surfaced.

In 2014, reports suggested that at least 2,000 foreign fighters from a number of European had already taken part in the fighting against President Assad. Five years down the line their number stood at 10,000 in both Syria and neighbouring Iraq.

"We felt that the Wahabi and those from the Muslim Brotherhood were the main factors of the movements on the ground and media, and they pushed Syria into chaos and instability," Mustafa explains.

And what they also felt, says the journalist, was that foreign powers who interfered in the conflict had also contributed to the mess and insecurity in Syrian society.

"Foreign powers were pursuing their own objectives in Syria and these included military domination and control over strategic areas and wealth. Little did they care about the Syrian people or their interests".

What Does the Future Hold?

Despite foreign interference, thousands of extremists, major destruction, an ailing economy, millions of refugees, and almost half a million deaths, Assad still remains at the helm in Syria, to the surprise of the international community.

Naturally, being an ally of Russia and Iran made Assad more resilient but Mustafa believes his strong standing was also due to the support he continues to receive from the Syrian general public, who tired of the mayhem over the last decade.

"Today, we are paying the price for the fake movement, a so-called 'revolution', the war, for partisanship and for siding with other countries and their projects... and the problem is that the solution is a complicated one and won't be resolved that easily", the journalist laments.

© AP Photo / Muzaffar Salman
FILE - In this June 15, 2011 file photo, thousands of supporter of Syrian President Bashar Assad, carry a gigantic 2,500 yard (2,300 meter) Syrian flag, as they march along a highway during a demonstration to support their president, in Damascus, Syria

To end that mess, Syrians would first need to overcome the divisions that have been splitting the country. A 2018 poll found that 65 percent of those quizzed were eager to put aside their differences to give unity a chance.

Unity, however, will not be able to solve the country's other problems. In 2018, the UN estimated the destruction wrought in Syria to be $120 billion and that it would take years to rebuild the war-torn state.

© AFP 2020 / KHALED DESOUKI
Decade After Arab Spring, Tunisia Still Hopes for Better Future
Although Damascus has received some help to keep it afloat, the assistance given was a drop in the bucket, and Mustafa believes the mess will not end "unless external intervention and economic sanctions end".

"The solution to the crisis is no longer linked to whether the Syrian people can find their harmony and live together. It is a matter of whether the West, Russia, Iran, some Arab countries, and the US can agree amongst themselves...we will only see the light at the end of the tunnel if unilateral sanctions are removed, and the interference in political life is stopped".