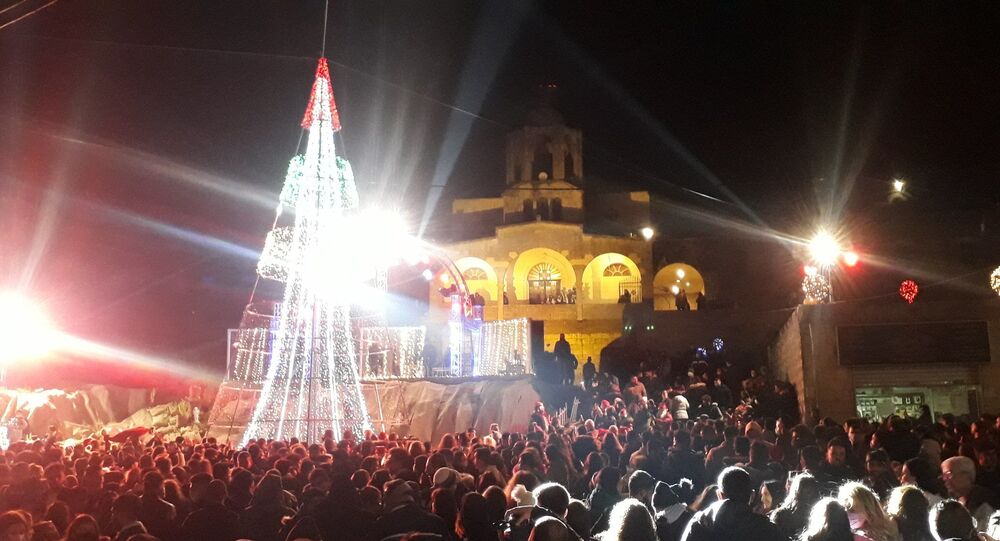 Over the past decade, Syria’s Christians, who make up about ten percent of the Arab Republic’s population, have defiantly continued to celebrate their most important holiday, notwithstanding the threat of war and physical extermination by foreign-backed jihadist groups.

Syria’s Christian communities are busy decking the halls with Christmas cheer, with various denominations ranging from Eastern and Syriac Orthodox to Catholics and Protestants in cities big and small stringing up lights, donning Santa costumes, and showing all-round merriment as they prepare for the holiday.

Social media users posted dozens of photos from the festivities, which have included tree lightings, carnivals, fireworks, and parades.

Some events were accompanied by messages to the international community. At a ceremony in the town of Basir in Daraa province, southern Syria, Father Munawar Bakhitan, pastor of the Church of St. George of the Melkite Catholics, called the lighting of the town's “Homeland Tree” Sunday a “message from Syria to the world.”

“Today we send a clear message to the whole world that the Syrian people are living together in love and fraternity,” Bakhitan said, calling on the Western powers to lift crushing sanctions against the war-torn nation.

Christmas tree in Basir town, #Daraa “Today we send a clear message to the whole world that the Syrian people are living together in love and fraternity,” Father Bakhitan went on saying, calling on the Western countries to lift their #sanctions on #Syria https://t.co/9tptKH9gDt

More beautiful Christmas scenes out of #Syria that the deceptive mainstream media won’t show us. pic.twitter.com/UB3nj3Tcyw

Tree-lighting ceremonies big and small have been held throughout the nation, with crowds of revelers snapping pics and filming videos of lights, trees, and dancing Santas.

Syria’s Christian communities, many of them among the oldest in the world, were targeted for expulsion and extermination by Daesh (ISIS)*, al-Nusra*, and other terrorist groups as they attempted to crush the country’s secular government in the country’s foreign-backed civil war. But with help from Russia, Iran, and Lebanon’s Hezbollah militias, the Syrian Army managed to beat back and defeat the takfiri terrorists and to liberate most of their country.

Syrians of all faiths and ethnic groups have called on the West to commit funds to Syria’s reconstruction, or at least to lift sanctions they’ve imposed against the nation. The country’s reconstruction has also been complicated severely by the US’s policy of stealing and smuggling oil out of Syria’s eastern territories, depriving Damascus of a major source of revenue.