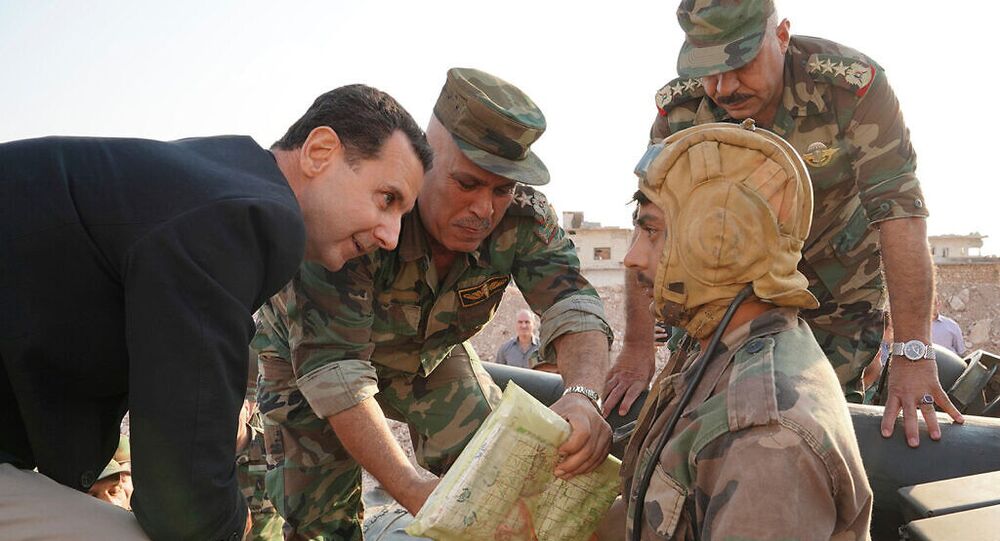 Last month, the same official frankly admitted that he and members of his staff had deliberately obfuscated and covered up the true size of the US military contingent in Syria from the president.

Jim Jeffrey, the veteran US diplomat who served as Trump’s special envoy for Syria for nearly two years prior to his November 13 resignation, has offered another frank admission about the real goal of the US mission in the war-torn nation – preventing President Bashar Assad’s government from restoring control over territory within the Arab Republic’s internationally-recognised borders.

In an interview with the Times of Israel, Jeffrey indicated that while the Trump administration had failed to achieve its goal of securing a complete withdrawal of ‘Iranian forces’ from Syria, or the complete destruction of Daesh, or a resolution to the Syrian conflict, it did manage to reach a “military stalemate,” denying Damascus control over part of its lands.

“What we have done is stop Assad’s forward movement militarily. There is a basic military statement,” Jeffrey said. He added that Turkish forces in northern Syria were similarly ‘denying terrain’ to Damascus, while Israeli air power “dominates the skies” and continues to launch regular (and illegal) sorties into the country.

Jeffrey also boasted that the US-led coalition and its European allies have “crushed Assad economically,” leaving the Syrian president’s Russian and Iranian allies “a totally failed state in a state of quagmire.”

Jeffrey, who had joined 50 other Republican national security officials in signing a 2016 appeal suggesting that Trump was dangerous and should not be allowed to become president before ultimately agreeing to serve in his administration in 2018, credited former CIA director-turned Secretary of State Mike Pompeo for convincing Trump to stay in Syria.

“I was pleased very much to work with Mike Pompeo. I think he is a brilliant secretary of state [who] has the faith and the trust of the president, and thus could talk [Trump] out of things and persuade the president of things,” Jeffrey said. This trust was “certainly necessary” to convince Trump not to pull all US troops out of Syria, according to the diplomat.

“Several times it looked like we were withdrawing our forces. That would have been a terrible mistake. But in [all] three cases…President Trump correctly reversed himself and decided to keep forces on the ground,” the ex-envoy recalled.

CARLOS BARRIA
Secretary of State Mike Pompeo and White House senior advisor Jared Kushner applaud as U.S. President Donald Trump is seen on the phone with leaders of Israel and Sudan speaking about the decision to rescind Sudan's designation as a state sponsor of terrorism, in the Oval Office at the White House in Washington, U.S., October 23, 2020. REUTERS/Carlos Barria
© AP Photo
'Timber Sycamore': Untold Story of CIA Covert Operation in Syria
Jeffrey also offered praised for Joe Biden’s national security team picks, saying leaders in the Middle East and around the world “know and trust” the former vice president and describing his selections as “reassuring”. For the record, these picks include former Obama-era Washington insider Antony Blinken, who was a major proponent of US wars in Iraq, Libya and Syria, and who Biden has tapped for his secretary of state.

Reacting to the Jeffrey interview, Syrian Arab News Agency contributor Ruaa al-Jazaeri suggested that the ex-envoy had effectively revealed that the “real goal of the US administration” has been “keeping its occupying forces in some of the Syrian areas”, discrediting the “fake slogans which claim that those forces are fighting the Daesh terrorist organisation”.

“Jeffrey’s admission is added to the admission made by Donald Trump, who has announced at many press conferences that his occupying forces which are deployed in Syria are there to protect the oil fields which have been pillaged by the US in collusion with the [Kurdish] militia,” al-Jazaeri added.

Jeffrey’s comments to the Times of Israel follow remarks he made to Defense One last month, in which he frankly admitted that he and his staff “were always playing shell games to not make clear to our leadership how many troops we had” in Syria. “What Syria withdrawal? There was never a Syria withdrawal,” the diplomat boasted, referring to Trump’s repeated plans in 2018 and again in 2019 to bring US troops home after announcing that the terrorists had been defeated.

© AP Photo / J. Scott Applewhite
‘What Withdrawal?’ Senior Official Boasts About Openly Lying to Trump to Keep US Troops in Syria
According to Jeffrey, the US continues to have “a lot more” than the estimated 200-400 troops approved by Trump in Syria at present.

Trump began a major shakeup at the Pentagon following the November 3 election, firing Secretary of Defence Mark Esper on November 9, with the move sparking a number of high profile resignations. On November 17, Esper’s replacement, former National Counterterrorism Center director Christopher Miller, announced that the US would make substantial cutbacks in US troop numbers in Iraq and Afghanistan. On Friday, the Pentagon announced that the US would be withdrawing almost all of its 700 troops from Somalia.

Trump had made pulling out of US ‘forever wars’ around the world a key plank of his 2016 campaign, but has so far failed to completely withdraw from any of the major conflicts the US is engaged in.

* A terrorist organisation outlawed in Russia and many other countries.

Dutch PM Covers Up Support for Terrorists in Syria