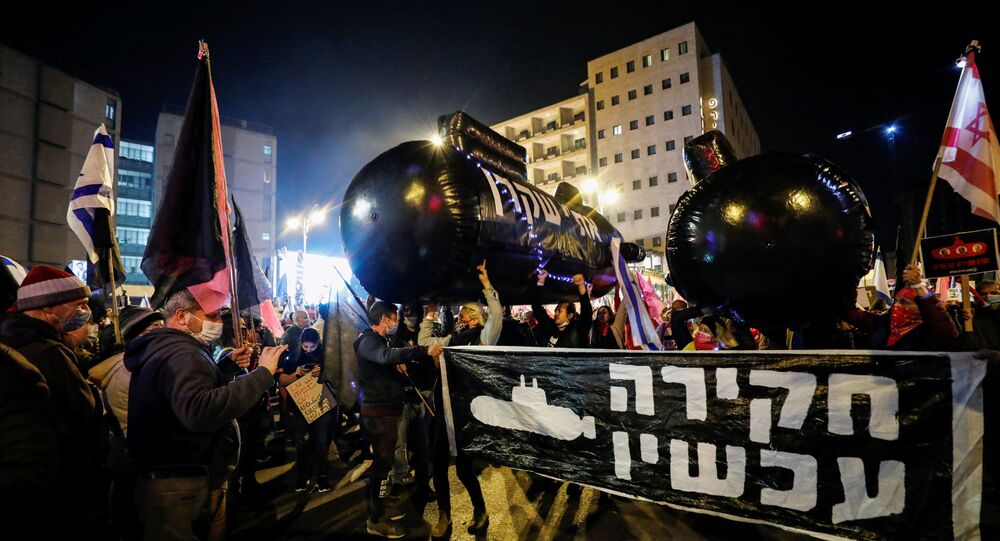 TEL AVIV (Sputnik) - More than a dozen people were detained during anti-government demonstrations on Saturday in Israel, and one protester died at a hospital after he was hit by a car, police said.

According to Israeli police spokesman Micky Rosenfeld, five of the arrests were made in Jerusalem, where demonstrators were said to have been blocking roads. Later, Israeli police updated the number of people detained at a Paris square protest in Jerusalem to 20.

Police spokesman Mikhail Zingerman told Sputnik that an 82-year-old demonstrator died on Saturday at a hospital in the city of Kiryat Ono in the Tel Aviv District after he was hit by a car.

"The driver who knocked down the man remained at the scene. There is no suspicion that the incident was intentional," Zingerman said.

Twitter users shared videos of the demonstrations and the police actions online.

🏴🇮🇱 At least 5 arrests in Jerusalem anti-Netanyahu protests, including, not for the first time, cops stripping a female protester naked pic.twitter.com/HoK4xVe7UC

Weekend protests calling on Israeli Prime Minister Benjamin Netanyahu to step down continue despite the coronavirus pandemic. Demonstrators accuse Netanyahu of mishandling the coronavirus situation in Israel, which has led to an economic crisis in the country.

Israel has over 343,600 confirmed coronavirus cases, with over 1,500 cases registered in the past 24 hours. Two new coronavirus-related deaths were confirmed in Israel in that period, with the country's total death toll at 2,901.

In November, Tel Aviv gradually reopened schools and people were allowed to go to the beach and visit parks. Some stores and malls reopened, as well as barber shops and beauty salons.

As Elections in Israel Draw Near, Netanyahu Counting on Ultra-Orthodox Parties for Support