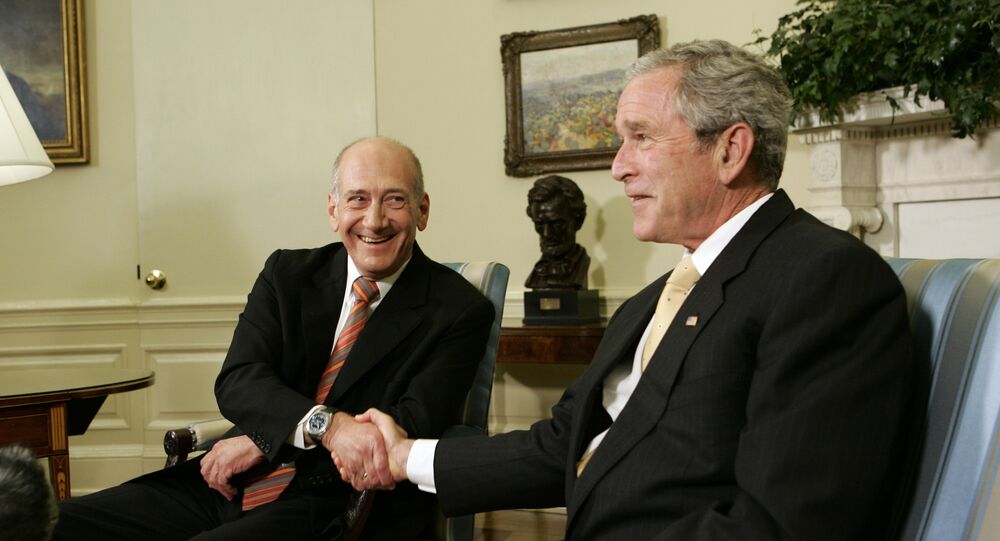 The revelation could help explain an uptick in US-Israel cooperation against Iran in the late 2000s, as well as providing further context behind the killing of leading Iranian nuclear scientist Mohsen Fakhrizadeh, whose death has yet to be attributed.

According to the Israeli media report, based on the recollections of a series of high-level intelligence officials and Ehud Barak, who served as Olmert’s defense minister at the time, Olmert played the recording for Bush during the latter's May 2008 visit to Israel to celebrate the 60th anniversary of the country’s founding.

He was reportedly so afraid of revealing the source of the recording that he refused to play it while anyone else was around, even the White House national security adviser, Stephen Hadley, who accompanied Bush on the trip.

According to the report, Fakhrizadeh could be heard giving details about the development of Iranian nuclear weapons. The report only quotes selected phrases, however, without the use of the word "nuclear". The scientist complains that the government is not providing him with sufficient funds to carry out his work. On the one hand, Fakhrizadeh says, in an apparent reference to his superiors, “they want five warheads,” but on the other, “they aren’t letting me work.”

Complaining about undue pressure from his superiors, Fakhrizadeh says, in Persian, “They want five warheads,” later stating that “they aren’t letting me work.”

While Barak claimed that Olmert had furnished the recording as proof of the seriousness of Iran’s nuclear weapons program, at no point does Fakhrizadeh use the word “nuclear” in any of the quotes.

Bush was reportedly moved enough by the revelation to agree to share intelligence with Tel Aviv about Iran’s nuclear activities, and even agreed to joint operations against Iran that later included the Stuxnet cyber attack. However, he stopped short of providing Tel Aviv with the necessary weapons to strike Iran’s research facilities, including the purchase of bunker buster bombs that Barak had pressed Bush and Hadley about earlier in their meeting.

Twenty-seven years earlier, in 1981, Israel proved its willingness to carry out military strikes against countries with which it was not at war in order to stop their nuclear weapons programs. The Operation Babylon airstrike on June 9 saw a group of Israeli F-16 fighter-bombers sneak into Iraq undetected and bomb Iraq’s Osirak nuclear reactor outside Baghdad, which Israel claimed was being used to manufacture plutonium for a nuclear bomb. Ironically, Iranian aircraft struck the same power plant a few months earlier, but failed to disable it.

The operation established what became known as the Begin Doctrine, after Menachem Begin, the Israeli prime minister who ordered the strike. Israel had now begun to carry out pre-emptive strikes against nations in the region with nuclear weapons programs.

“On no account shall we permit an enemy to develop weapons of mass destruction against the people of Israel,” Begin said at the time. “We shall defend the citizens of Israel in good time and with all the means at our disposal."

In an interview two years ago, Olmert told Israeli broadcaster Kan that Fakhrizadeh remained a legitimate target, and seemed to boast about the recording and that he had a mole close to the scientist.

Fakhrizadeh was assassinated on November 27 in a dramatic ambush on a highway outside Tehran. The attackers reportedly used a car bomb and robotic machine guns against the scientist’s car. No nation or group has claimed responsibility for the operation.