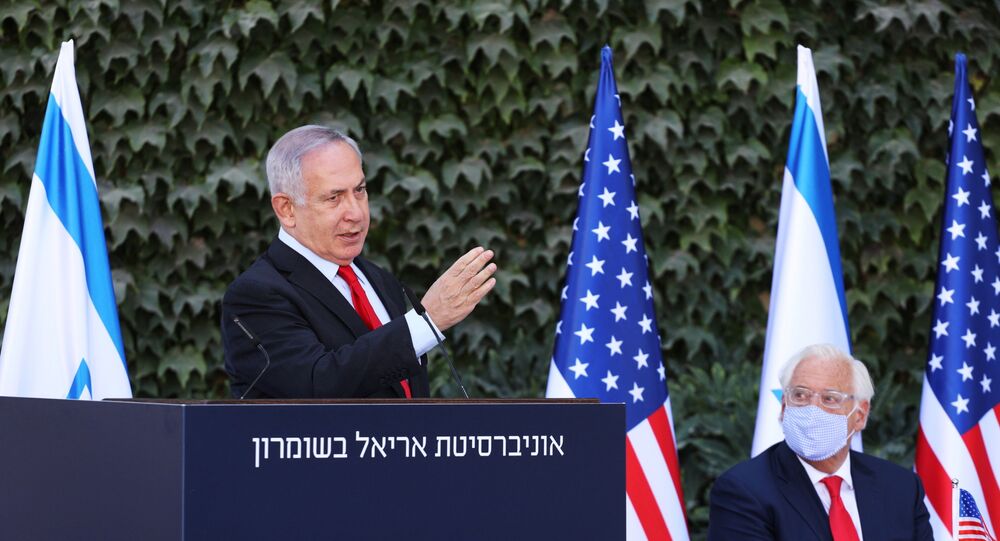 The Israeli prime minister reportedly fears that Aviv Kochavi might repeat the path of his former Defence Minister Avigdor Lieberman, who became one of Netanyahu's main political opponents, or at least leak information to his coalition partner Benny Gantz, who is slated to be the next prime minister.

Israeli Prime Minister Benjamin Netanyahu kept his Chief of General Staff, Aviv Kochavi, in the dark on several important issues related to national security, and has been doing so since his appointment to the post in 2018, Haaretz newspaper reported, citing numerous anonymous sources, including senior officials in the Israeli government.

Netanyahu reportedly does not share information or cooperate with Kochavi even on sensitive topics the two are supposed to discuss. Both the office of the prime minister and the IDF spokesperson deny the lack of cooperation between the two, calling the article's allegations "groundless".

Among the issues that Netanyahu purportedly concealed from Kochavi were the actual plans for extending sovereignty to certain West Bank settlements, which had since been put on hold. As a result, the chief of staff reportedly did not know what territories might need additional protection as a result of the move, despite being in charge of the military.

"To this day the IDF doesn’t have maps of this plan and to this day Kochavi cannot explain what was meant to happen with regard to annexation", one of Haaretz's sources said.

Israel's peace deal with the UAE and Bahrain, which had resulted in freezing the plans for extending Tel Aviv's control over the West Bank, also reportedly came out of a clear sky for Kochavi, who learned of the agreement not long before the media reported it. The purported provision in the accord with the UAE about the US selling F-35 jets to the monarchy, whose existence was denied by Tel Aviv, was a surprise for the chief of staff too. The idea to allow the sale was reportedly discussed between National Security Council chairman Meir Ben-Shabbat and Kochavi's subordinate, Air Force Commander Maj. Gen. Amikam Norkin, in secret.

The distrust also resulted in the IDF undertaking only a limited effort in helping the government to deal with the coronavirus pandemic, the newspaper's sources indicated. The Israeli military has one of the biggest capacities in the country to carry cargoes from around the world and yet they have never been used to alleviate shortages of the most crucial medicine and equipment, purportedly due to Netanyahu's mistrust for the chief of staff.

"The decision by Netanyahu not to activate the IDF and Defence Ministry channels to bring the vaccines, the ventilators and personal protective equipment and [instead] to give credit and resources to the Mossad, to Yossi Cohen, was deliberate", an anonymous source involved in purchasing the goods to deal with the pandemic in the country claimed.

The newspaper cited former and current defence ministry officials, who spoke on condition of anonymity, as being mostly shocked by the fact that Netanyahu never updated the military, including Kochavi, of its alleged plans to meet with Saudi Arabia's Crown Prince Mohammed bin Salman on the kingdom's soil. The meeting, whose existence was denied by Riyadh and remains uncommented on by Tel Aviv, was purportedly convened on 23 November and was attended by Netanyahu, head of the country's spy agency Mossad, Yossi Cohen, and military secretary, Avi Bluth. The latter, however, never updated Kochavi, his superior, about the alleged trip, the sources claim.

Haaretz's sources condemn Netanyahu's actions in regard to the alleged voyage to Saudi Arabia as irresponsible. The sources alleged that had the prime minister's plane crashed during the purported trip, this could have created a crisis of power in the country.

"What would happen if a plane carrying the prime minister, the head of the Mossad, and the military secretary would be forced to make an emergency landing in the hostile territory because of a malfunction? What would happen if they had to bail out and it would be necessary to rescue them from the sea or from hostile territory?" a military source allegedly familiar with procedures for such trips told the newspaper.

Another military source explained that the prime minister has to update the defence minister or the person replacing him to preserve government continuity, even in cases when they undertake a "minor medical procedure that requires anaesthesia", not to say about the reported trip to Saudi Arabia.

The newspaper's sources offered various explanations for Netanyahu's behaviour towards Kochavi, most of them relating it to the prime minister's political aspirations in some way. Some of the sources suggested that Netanyahu sees the chief of staff as an ally of his coalition partner, Benny Gantz, whom he will be forced to hand over the seat of the prime minister midway to a new general election, unless Netanyahu breaks the coalition agreement.

"He really believes that Kochavi will share with Gantz things that Netanyahu would want to keep from him, for example, every detail related to the normalization with the Gulf states and other countries they’re talking about", an anonymous source close to the head of Kahol Lavan party said.

Gantz and Kochavi indeed served together in the Paratroops Brigade and the head of the Blue and White alliance appointed him to some posts that helped him eventually rise to the level of the chief of staff. At the same time, his last designation was suggested by former Defence Minister Avigdor Lieberman. According to the newspaper's sources, Netanyahu's distrust for Kochavi only intensified with the arrival of Benny Gantz in the government as part of the coalition deal.

However, a senior official, who spoke to Haaretz on the condition of anonymity, suggested that Netanyahu fears Kochavi might become his potential rival in the future and hence limits his ability to gain popularity among Israelis. According to the official, the prime minister fears that the chief of staff might repeat the stories of Avigdor Lieberman and former IDF Chief of Staff Gadi Eisenkot. The former founded Yisrael Beiteinu (Israel Our Home) party, a rival of Netanyahu's Likud. Eisenkot is also reportedly mulling starting a political career, but has not yet officially announced such intentions.

"He learned a lesson with Gantz, and Eisenkot is right around the corner. He doesn’t intend to make the same mistake with Kochavi", the anonymous official shared.

Vaccines, Peace Agreements and a High Credit Rating: What Can Keep Netanyahu in Power?

'Women Are Not Animals You Can Hit': Netanyahu Makes Snowball of Gaffes During Speech on Violence