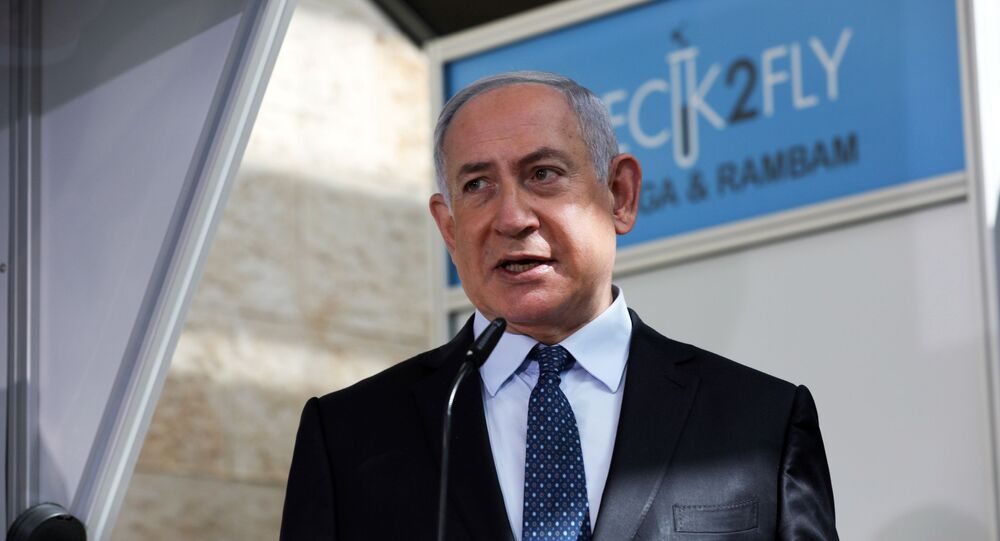 Vaccines, Peace Agreements and a High Credit Rating: What Can Keep Netanyahu in Power?

Although Israeli surveys still show that Netanyahu's Likud party has weakened, the Prime Minister has a good chance of getting re-elected if Israel ends up going to the polls, due to a recent string of achievements.

Just as it was before, hundreds protested against the prime minister on Saturday, including in front of his official residence in Jerusalem, demanding that he step down.

The crowds claim that the Israeli PM, who has been indicted in three corruption cases, should not remain in his seat. Many are also angry with the way he has been handling the COVID-19 pandemic that has claimed the lives of more than 2,700 people and shattered Israel's economy.

© REUTERS / Abir Sultan /Pool via REUTERS
Survey Predicts Next Israeli Government Will Be Formed Without Netanyahu, For First Time in Years
The dissatisfaction with Netanyahu's policies sits well with recent polls that project relatively low gains for the longtime prime minister.

Last week, Israel's Сhannel 13 released a survey showing that had the elections been held recently, Netanyahu's Likud party would have gotten 29 out of 120 seats in the Israeli parliament, 7 seats less than what they received in March, during the last round of national polls.

Although this number of seats doesn't look promising and might not be enough for Netanyahu to form a coalition, it is definitely higher than what the PM was projected to get several weeks earlier, when polls predicted his party would not obtain more than 26 spots in the Knesset.

Now, however, this tendency of sinking polls seems to be flipping, and the reason for this is Netanyahu's attempts to curb the pandemic.

On Friday, it was announced that Israel had come to an agreement with AstraZeneca, a British pharmaceutical company, that will supply the Jewish state with about ten million vaccine doses.

A week ago, Israel signed a contract with another company, Pfizer, that will provide Israel with eight million doses, promising to vaccinate four million Israeli citizens against COVID-19.

And earlier, the Israeli government had announced that vaccines against COVID-19 would also arrive from Moderna, an American biotechnology company, and Sputnik V from Russia, with Netanyahu mulling the possibility during a phone call with President Vladimir Putin.

© Sputnik / AFK Sistema press service
Sputnik V to Be First COVID-19 Vaccine Presented for Registration in Israel, Hospital CEO Says
Netanyahu's idea is simple. He is striving to provide Israel's nine million citizens with as many vaccines as possible to bring it to a condition of herd immunity, a move that will effectively end the health crisis in the country.

On the economic front, Netanyahu has also taken a number of steps to ease the crisis. Many of the restrictions that were imposed in mid-September have now been lifted and although the country is still not fully open, it does show signs that it's getting back on track.

Businesses are gradually opening up, the education system has started functioning, and the general mood is that Israel will soon be able to overcome this hurdle.

Optimism was also felt after Standard & Poor, one of the three top US-based credit ratings agencies, affirmed Israel's position at a relatively high AA- rating, despite the country's fiscal woes, which have been caused by the pandemic.

And it has also been felt after the visit of a Bahraini delegation at the end of last week that highlighted the fact that Israel was gradually expanding its circle of friends, getting more  support in the region in the wake of historic US-brokered peace deals with a range of Arab nations.

© AP Photo / Tsafrir Abayov
Netanyahu Remains Optimistic Despite Polls Predicting Decline in Ratings, Lowest Since March
But Netanyahu knows that these and other achievements cannot guarantee him re-election in the event that Israel does end up going to the polls, a highly likely scenario, given the fact that the current government is still struggling to pass its national budget.

He knows that on 23 December, if the budget is not passed, the Knesset will automatically dissolve itself, prompting another general vote, the fourth in two years.

Netanyahu's rivals will not make it easy for him to get re-elected and if he does want to retain his office, he will need to pull more rabbits out of his hat. However, having been touted as a magician in Israel, Bibi might be able to pull off that trick.