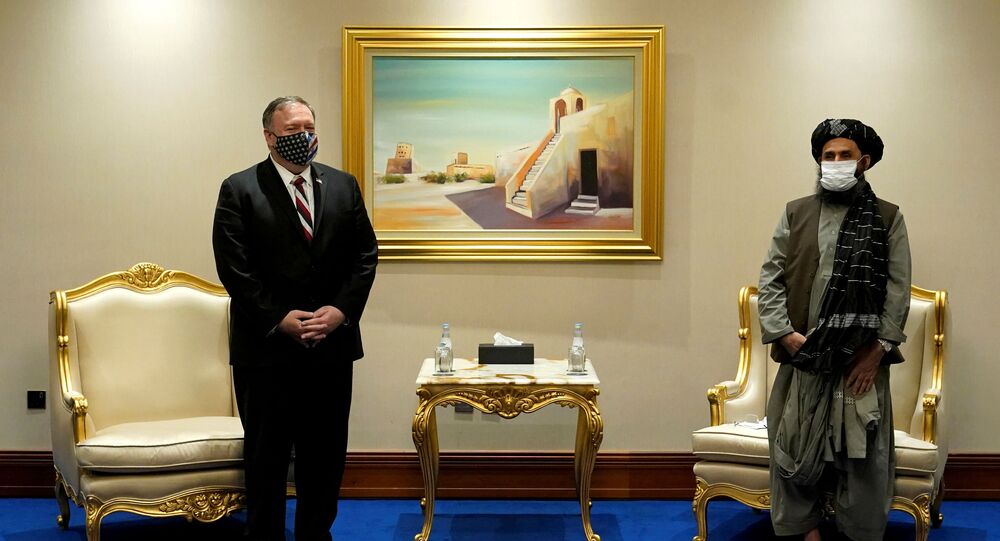 KABUL (Sputnik) - Mullah Abdul Ghani Baradar, the chief of the Taliban political office, and Shaykh Mawlawi Abdulhakeem, the head of the movement’s team that negotiates with the Afghan government, met with US Secretary of State Mike Pompeo in Doha on Saturday, a group spokesman, Mohammad Naeem, said.

"This evening, the political deputy and head of the political office Mullah Abdul Ghani Baradar and the head of negotiating team Shaykh Mawlawi Abdulhakeem and the delegation accompanying them met with Secretary of State Mike Pompeo and his team," Naeem tweeted.

The spokesman added that the sides discussed a peace deal between the US and the Taliban*, as well as the ongoing intra-Afghan negotiations.

During his visit to Qatar, Pompeo also met with Afghan Minister for Peace Sadat Mansoor Naderi.

The intra-Afghan talks between the Kabul administration and the Taliban movement began in September, after the latter reached a peace deal with the US in February. According to the Taliban-US deal, Washington will withdraw its military from Afghanistan, provided that the Taliban stop using Afghan territory for attacks on the US and its allies.

The meeting between Pompeo and the Taliban negotiating team was later confirmed by the US Department of State's principal deputy spokesman, Cale Brown, who said that the top US diplomat praised the Afghan insurgency's Doha bureau for progress they had made in the peace talks.

"He called for a significant reduction in violence and encouraged expedited discussions on a political roadmap and a permanent and comprehensive ceasefire. Secretary Pompeo reiterated that the people of Afghanistan expect and deserve to live in peace and security after 40 years of war and bloodshed," he said.

The meeting came hours after a barrage of rockets hit parts of Kabul in the early hours of Saturday, killing 23 and injuring over 50. Daesh*, claimed responsibility for the attacks.

*Taliban, Daesh - terrorist groups banned in Russia and many other countries