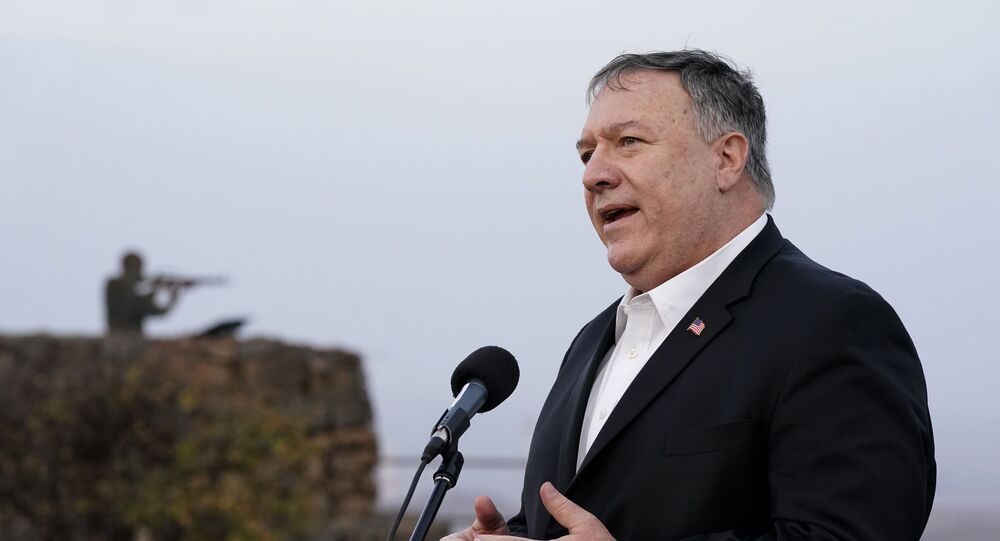 MOSCOW (Sputnik) - Arab League Secretary-General Ahmed Aboul Gheit condemned on Thursday the unprecedented visit by the top US diplomat to the Golan Heights and a Jewish settlement in the West Bank.

"This action is a flagrant violation of international legitimacy and encourages the right-wing Israeli government to continue its illegal settlement construction, deemed the greatest obstacle to peace based on the two-state solution," he was quoted as saying in a statement.

The official added that US Secretary of State Mike Pompeo’s trip, which happened earlier in the day, would not change the internationally recognised status of the Palestinian lands.

Pompeo also announced that the US would recognise all goods coming from Jewish settlements in the West Bank as Israeli, in a bid to end the global boycott on such products, which he called "a manifestation of anti-Semitism."

According to Nabil Abu Rudeineh, a spokesman for Palestinian President Mahmoud Abbas, Pompeo's visit has been "a flagrant defiance of all international legitimacy resolutions". He also criticised the US administration for "actively participating in the occupation of the Palestinian territories."

"The US administration’s step to label products imported from Israeli colonial settlements won’t legitimize the settlements, which will be gone sooner or later," he was quoted as saying by the Palestinian news agency WAFA.

The Palestinian National Council, the legislative body within the Palestine Liberation Organisation, joined a growing chorus of criticism over Pompeo’s trip, saying it set a "dangerous precedent" and challenged a UN resolution that called Israel settlement activities an obstacle for peace.