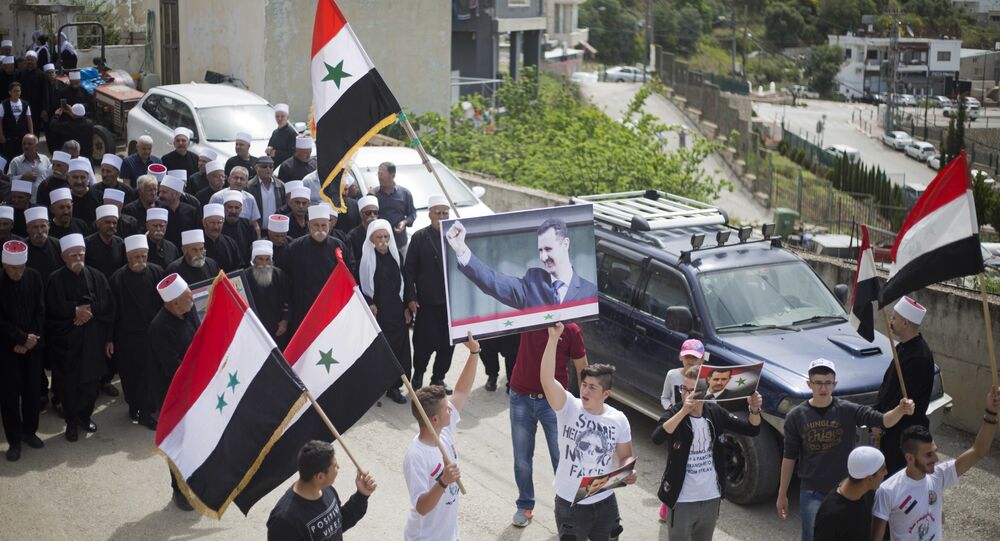 China, Other Developing Nations Weigh in on Syrian-Israeli Spat, Tell Tel Aviv to Get Out of Golan

Israel occupied and annexed about 1,200 square km of Syria’s strategic Golan Heights in the aftermath of the Six Day War of June 1967. The United Nations condemned the move as “null and void and without international legal effect”. Damascus has vowed to get its territory back one day "by any means necessary".

China and the Group of 77 bloc of developing nations has called on Israel to carry out an “immediate and full” withdrawal from Syria’s Golan Heights territory and all other occupied Arab lands.

In a ministerial declaration adopted by the group after a virtual meeting, participants “reaffirmed the inalienable rights of the Palestinian people and of the population of the occupied Syrian Golan over their natural resources, including land, water and energy resources, and demanded that Israel, the occupying power, cease the exploitation, damage, cause of loss or depletion and endangerment of the natural resources”, in both territories, as well as from occupied Lebanese lands.

The continued occupation of these territories “constitutes violations of international law and severely undermines their ability to pursue sustainable development,” the G77 said, adding that Israeli forces should withdraw immediately to behind borders which existed before 4 June 1967.

The Trump administration formally recognised Israeli “sovereignty” over the Golan Heights in the spring of 2019. The move was criticised by several US allies, as well as China and Russia. Russian foreign Minister Sergei Lavrov called it a “conscious, deliberate demonstration of lawlessness”.

Israel occupied the Golan Heights in June 1967 after the Six Day War against a coalition of Arab states including Syria, Egypt and Jordan. Israel formally annexed the strategic territory in 1981, with UN Security Council members - including the US - unanimously refusing to recognise the decision.

© AP Photo / Ariel Schalit
Non-Aligned Movement Demands Israel Withdraw to 1967 Borders With Syria
About 23,000 ethnic Druze continue to live in the Israeli-occupied Golan, most of them refusing to get Israeli citizenship and repeatedly staging demonstrations expressing their desire to return to Syria.

The G77’s ministerial declaration also called on the lifting of the US economic, financial and commercial blockade against Cuba, and expressed support for an Israeli-Palestinian peace deal in accordance with the 2002 Arab Peace Initiative. The meeting expressed support for the Iran nuclear deal, and called for all unilateral sanctions against the Islamic Republic, as well as Sudan, Venezuela and North Korea to be lifted.

The so-called Group of 77 was created in 1964 by 77 non-aligned developing countries. The group has since expanded to comprise 134 members. China provides political and financial support to the G77, but does not formally consider itself a member. Accordingly, official documents refer to the coalition as the ‘The Group of 77 and China’.