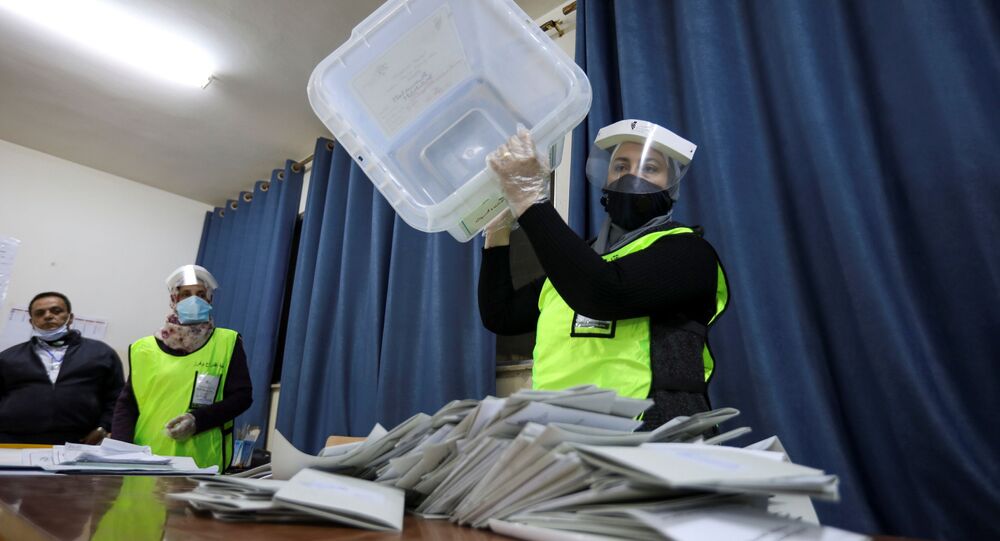 Jordan's Parliamentary Race Unlikely to Change Political System, Nor Will It Bolster Opposition

Jordan's Islamic Action Front, a party close to the Muslim Brotherhood deemed a terrorist movement by several states, took part in the country's parliamentary elections held on Tuesday. But Israel's former diplomat to the kingdom says the group is unlikely to make any significant grabs.

Votes are currently being counted in Jordan after it held its parliamentary elections on Tuesday where more than 1,700 contenders are competing for one of the 130 places in its chamber.

Apathy caused by the dire economic situation and the raging coronavirus kept many Jordanians at home, with authorities reporting a turnout of less than 30 percent, the lowest in recent years.

But even when the votes are counted and the results are announced, the elections are not set to change the present system of rule by tribal and pro-governmental factions.

Nor are they expected to bolster Jordan's opposition, the Islamic Action Front (IAF), a party linked to the Muslim Brotherhood, and deemed a terrorist organisation by several Arab states.

That, however, doesn't prevent the IAF from trying its luck. In September, when the Jordanian parliament was dissolved, the party announced it would run in the forthcoming elections, effectively ending its boycott of parliamentary races.

Their agenda is straightforward. Apart from striving to see Sharia law become more dominant in Jordan, they are also supportive of the Palestinian cause and are vocal about their anti-Israel stance.

Yet, Oded Eran, a senior research fellow at Israel's Institute for National Security Studies and someone who served as the country's ambassador to the kingdom, believes the chances of the IAF to improve their position from the 2016 race, when they received 16 seats in the parliament, are low.

"The influence and the prestige of the Muslim Brotherhood has declined in recent years. It is not only the case with Jordan; it has happened in other states too. It doesn't mean they ceased to exist but they will have difficulty in functioning".

Muslim Brothers Are Not a Threat

Although relations between the MB and Jordan have largely been stable primarily because of the decision by King Abdullah II to opt for dialogue rather than confrontation, 2015 saw a peak in tensions between the two sides. Back then authorities banned all their public gatherings and took a number of steps to make sure the movement didn't dare rear its head.

In 2016, for example, authorities closed down MB's headquarters in Amman, and recently Jordan's court decided to dissolve the movement saying it failed "to rectify its legal status under Jordanian law".

"The eruption of the coronavirus has also hurt the MB", said Eran. "It prevented them from gathering in mosques and that eventually impaired their activity".

However, rural areas of Jordan still seem to harbour supporters of the movement, who are often frustrated at the way the government is handling the economic crisis that has pushed poverty and unemployment rates to unprecedented heights.

But Eran says the impact they make is too marginal to be able to challenge the monarchy, especially given the fact that the group get most of its support from among the less privileged of society who often rely on the government for water and other necessities.

And that fragile position of the MB is unlikely to change in the foreseeable future, the former diplomat reckons.

Some experts in the Middle East could argue with that statement. Although it is still unclear who won the presidential race to the White House, many in the region worry that the new administration under Joe Biden, if he ends up taking office, will be supportive of the Muslim Brotherhood, giving them a backwind they used to enjoy from under President Barack Obama.

However, Eran believes it is extremely unlikely such a shift would ever take place in Jordan.

"Biden is an experienced politician, who is knowledgeable about the situation in the region and who will not re-open that file [of the Muslim Brotherhood - ed.]. King Abdullah knows this and he welcomed his victory. For him, it is a relief also because that means that the peace of the century deal and Israel's annexation plan is off the table".