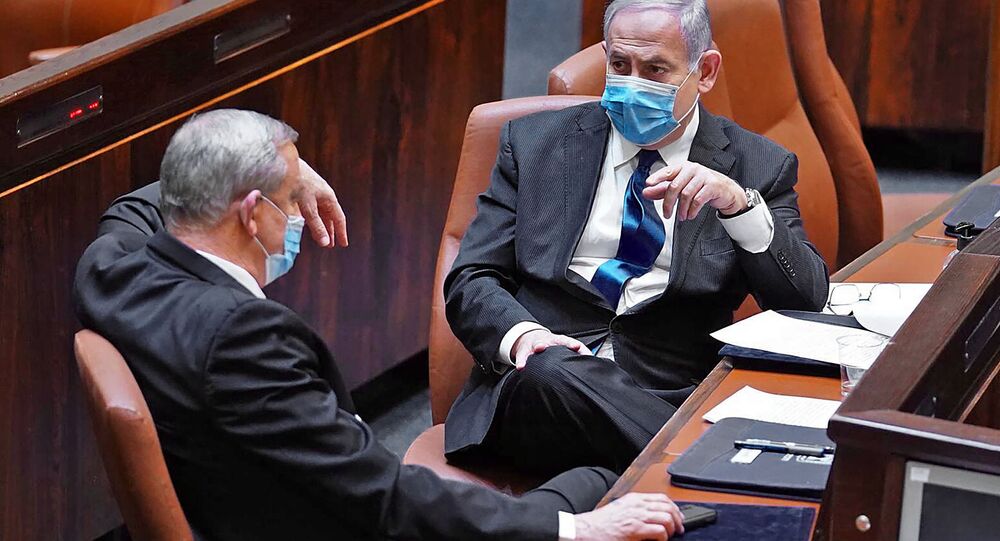 The alternate prime minister’s Blue and White party has repeatedly threatened to end its coalition agreement with Likud, with a recent poll by Israel’s Channel 13 suggesting the next government could be formed without Prime Minister Benjamin Netanyahu in it. The dispute between the two major parties revolves around the budget.

Israeli Defence Minister and Alternate Prime Minister Benny Gantz plans to tell Benjamin Netanyahu that he wants a political ‘divorce’, and that the partnership between Blue and White and Likud is over, The Jerusalem Post has reported, citing a source close to Gantz.

Speaking to reporters on Tuesday, Gantz hinted that time was “running out” to resolve the long-running budget dispute between the two coalition partners, and that the country was “really on the verge” of the need for new elections.

Gantz and Netanyahu reportedly ignored one another on Tuesday during a Knesset meeting on Israel’s recently approved deal about the normalisation of relations with Bahrain. In his remarks to the Knesset plenum, Gantz told lawmakers that although Tel Aviv was “talking loftily about peace with countries in our region,” it was now “time to talk about peace among ourselves.”

Taking aim at Netanyahu specifically, the defence minister said that he had ‘extended his hand’ to Likud and agreed to a unity government “to fight COVID-19 and avoid the risk of a civil war”.

The crux of the disagreement between Israel’s grand coalition government focuses on the budget, with Likud and Netanyahu seeking approval of a one-year budget, and Blue and White and Gantz seeking a two-year emergency budget. Both sides cite the economic and social dislocation caused by the coronavirus and the government’s response to it as justification for their stance.

© REUTERS / POOL New
Netanyahu Says He Didn’t Inform Gantz About UAE Negotiations Because of Security Considerations
The renewed talk of elections follows remarks by Gantz last week in which he warned that he would call for fresh elections to be held if the budget were not passed by 23 December.

The budget was initially slated to be passed in August, but the deadline was pushed back in an emergency Knesset vote amid the Blue and White/Likud deadlock. Under the terms of the Bill, if the budget is not passed by December, a new election will be held automatically in March 2021.

Israel’s Blue and White/Likud unity government was cobbled together in May 2020, after three consecutive elections between April 2019 and March 2020 failed to allow either main party or its allies to eke out a majority.

Israel's Knesset to Vote on Normalisation Deal With Bahrain on Tuesday, Reports Indicate