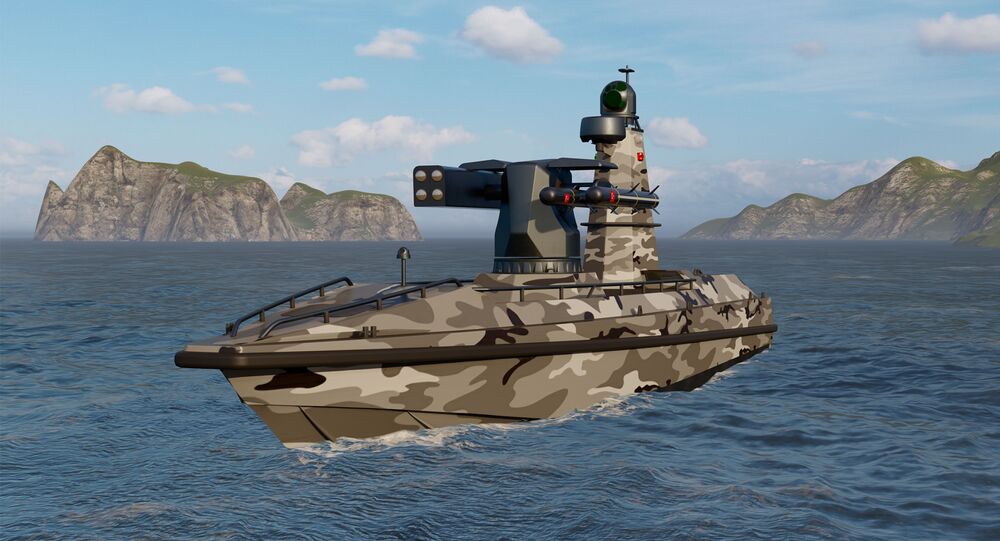 The AUSV program’s prototype, dubbed the ULAQ, has a 400-kilometer range and will be able to travel up to 65 kilometers per hour.

The vessel will also be equipped with night vision technology and “an encrypted communications infrastructure allowing the platform to be operated from mobile vehicles and headquarters or from sea-going platforms such as aircraft carriers or frigates.”

A concept video of the AUSV was published by Public Defense on October 29, showcasing an illustrated version of the ULAQ.

The ULAQ will be armed with laser-guided Cirit and laser-guided, anti-tank L-UMTAS missile systems, as well as remote control and artificial intelligence capabilities.

“We are indescribably happy and proud to announce the launch of the first Armed Unmanned Surface Vehicle programme after years of intensive engineering works and investments following our dream,” said Ares Shipyard CEO Utku Alanc during an October 28 joint news conference.

“We have achieved this success and pride with our owner’s equity investments by prioritizing our national interests as it always has been. We hereby present the [AUSV] as the first platform of the ULAQ line to be launched in December.”

“We have once again understood the importance of the ‘Blue Homeland’ defense, Economic Exclusive Zone protection, protection of maritime borders of the Turkish Peninsula especially with recently emerging disputes,” added Meteksan Defense CEO Selçuk Alparslan during the joint news conference.

“Blue Homeland” defense refers to the protection of Ankara’s maritime claims in the eastern Mediterranean Sea.

Greece’s foreign ministry accused Turkey of carrying out a “major escalation” by deploying Turkish seismic research vessel Oruc Reis to an area just south of the Greek island of Kastellorizo last month, according to Reuters.

“Turkey has proven it lacks credibility. All those who believed Turkey meant all it said before the European summit of Oct. 1-2 now stand corrected,” said Greek government spokesperson Stelios Petsas on October 12.

The EU had previously said that it would consider imposing sanctions on Turkey if it continued operations to exploit hydrocarbons in the eastern Mediterranean Sea.

“They are doing everything to escalate tensions,” Turkish Defense Minister Hulusi Akar argued in response. “The Navy will provide the necessary escort and protection to our vessels as needed.”