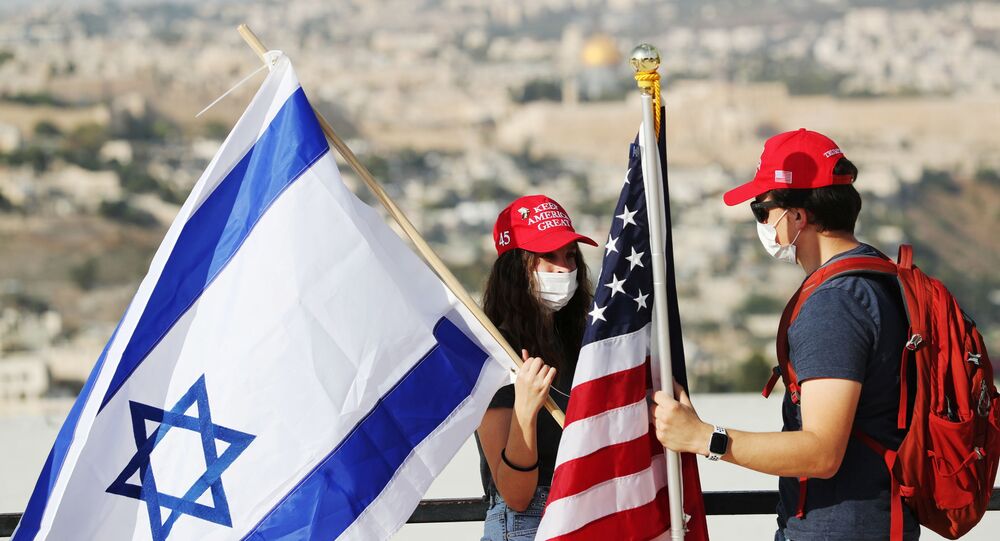 'Great for Israel': Ahead of US Elections, Most Israelis Would Like to See Trump Re-elected

Pollsters predicting a victory for Biden are wrong, thinks the vice president of Republicans Overseas. The reason for this is the inaccuracy of polls in the 2016 presidential race and Trump's list of achievements during his four years in office.

With only a few days left until election day in the United States, the two candidates' campaigns wrapped up in Israel, one of Washington's main regional allies and home to a large American community.

On Tuesday, Donald Trump's campaign office in Israel organised its final event sending a motor vehicle cavalcade from Tel Aviv to Jerusalem in a sign of support for the incumbent president.

© REUTERS / Ammar Awad
Women wave American and Israeli flags from a car window as they join a convoy to the U.S. Embassy in Jerusalem to show support for U.S. President Donald Trump, ahead of the upcoming U.S. election, in Jerusalem October 27, 2020.

Marc Zell, the vice president of Republicans Overseas and the man, who stood behind this and other campaigns, says Trump will not only be "great for America" but also for its allies in the Middle East.

In his four years in office, Trump has managed to produce a list of achievements, something that even prompted Prime Minister Benjamin Netanyahu to tout him as "the best friend Israel could ever have".

In 2017, he recognised Jerusalem as the capital of Israel and several months down the line he moved the US Embassy to the disputed city.

On the international front, he confronted Tehran, considered a threat to Israel by the Netanyahu government, by abandoning the Iran nuclear deal, significantly cut down the funds the US transfers to the Palestinians, and played a pivotal role in bridging the gap between the Jewish state and several Arab and Muslim nations.

© REUTERS / Ammar Awad
Activists hold American and Israeli flags after joining a convoy to the U.S. Embassy in Jerusalem to show support for U.S. President Donald Trump, ahead of the upcoming U.S. election, in Jerusalem October 27, 2020.

Now, that policy seems to be yielding results. According to a recent poll, more than 63 percent of Israelis said they would like to see Trump re-elected, with only nearly 19 percent expressing similar views about his challenger, Joe Biden.

Interestingly enough, these are not the views of American Jews, who tilt towards Biden on literally every issue, including Israel, and Zell who acknowledges this trend attributes it to history and traditions.

"In every cycle of American elections, the Jewish people in the US have supported a Democratic candidate, no matter who that was. [But what has changed] is the way the [Jewish people] speak of Trump, as if he was the devil incarnate.. this is why we are not spending time to convince anyone of them. It is a useless task", Zell explains.

© REUTERS / CARLOS BARRIA
How US Polls Overlooked 'Hidden Trump Vote' & Why Biden Shouldn't Take Victory for Granted
What Trump and his campaign team are doing is trying to convince other populations that the current president is their best choice.

Many are still not convinced. National polls in the US show Biden ahead, but Zell doubts the accuracy of these surveys, citing mistakes in 2016 and the reluctance of some Americans to admit they are voting for Trump.

"Many are afraid to openly say it because that might cost them their jobs. We have seen this attitude in work places and colleges where students were chased out of classes or were given bad grades because of their support for the president. So millions of Americans will not admit it but on the day of the elections, they will cast their vote for the Republican candidate", Zell emphasises.

Zell believes that many Americans have been brainwashed by both the mainstream media and social networks, who, according to the VP of Republicans Overseas, often spew "irrational" hatred towards the current president and blame him for "everything that is wrong in the world".

© REUTERS / CORINNA KERN
A man rides his scooter by a banner supporting U.S. President Donald Trump on a bridge along a highway, ahead of the upcoming U.S. election, in Tel Aviv, Israel October 28, 2020.

Trump's ratings have also been hurt by the raging COVID pandemic. The latter has claimed the lives of more than 220,000 Americans and put thousands more out of work.

But Zell is certain that many Americans do appreciate what Trump has done for their country.

"He might not be eloquent. He tweets, calls people names, and at times behaves in an unpresidential manner but what he has done for the American economy, the country's military and even when dealing with COVID-19 is impressive".

It is for these reasons, says Zell, that Trump will win a second term on 3 November.

"In 2016 Trump was just promising. But now he has a proven record of the many things he has done. Plus I see the enthusiasm surrounding him. The support people have for him is simply mindblowing", Zell concludes.