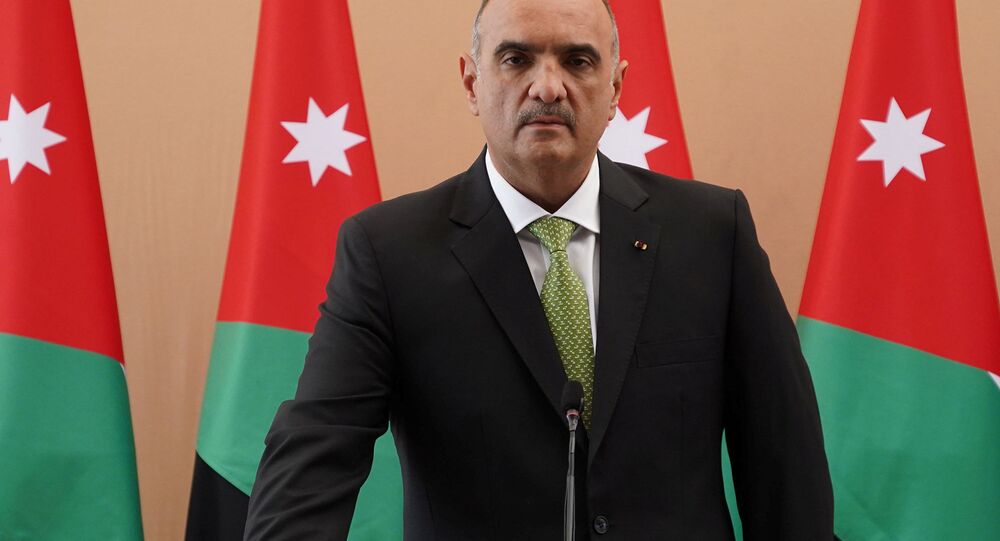 Winds of Change: How Likely is it Jordan's New PM Will Become Closer to Israel?

Believed to be a friend of Jared Kushner, Bisher Khasawneh might change Jordan's stance on the proposed US peace plan and shift his country's attitude towards Israel, believes an Israeli expert. But that will not happen quickly, as he'll first need to tackle the nation's public opinion and serious opposition from within the government.

Jordan's new prime minister, Bisher Khasawneh and his cabinet, who took office in mid-October, will need to tackle a number of pressing issues.

Domestically, the new head of government will need to focus on combating the COVID-19 pandemic that has already claimed the lives of nearly 450 Jordanians and will need to address the issue of the country's ailing economy. The latter is expected to shrink by 6 percent by the end of this year.

On the international front, his input as a seasoned diplomat and a former negotiator with Israel will be needed on the Palestinian issue, especially given the Jewish state's ongoing expansion in the West Bank and its recent normalisation agreements with three Muslim countries, contributing to the PA's isolation.

Committed to the Palestinian Cause

Over the years, the Hashemite Kingdom has been supportive of the Palestinians, who, according to some estimates, make up some 70 percent of the country's total population.

Although Palestinian-Jordanian relations were dealt a severe blow in the 1970s following a military confrontation with fighters from the Black September, a Palestinian terror group, the two sides managed to overcome that challenge.

Jordan has repeatedly supported the idea of a two-state solution. It rejected the Jewish state's plan to apply sovereignty over parts of the West Bank and was critical of President Donald Trump's peace plan presupposing land swaps and the establishment of a Palestinian state with its capital on the outskirts of Jerusalem, not in the eastern part of the disputed city.

Now, however, that attitude towards the deal proposed by the Americans might change, thinks Pinhas Inbari, an analyst for the Jerusalem Centre for Public Affairs.

The reason for this is the new PM's "friendship" with Jared Kushner, President Trump's son-in-law, who played a pivotal role in developing the "deal of the century" peace initiative and the mastermind behind the pacts signed between Israel, the United Arab Emirates, and Bahrain in mid-September.

"What we know is that in the past half a year, the current PM visited Saudi Arabia and the Gulf on a number of occasions, and what we also know is that he is a good friend of Kushner, which means that Jordan might want to change its course and join the camp of Trump".

But that won't be an easy task, especially given that Jordanian public opinion has been staunchly against the propositions made by the Trump administration.

In July, a survey conducted by the Washington Institute found that 68 percent of Jordanians were "concerned" that the peace plan was designed to turn Jordan into an alternative Palestinian state. Thirty-eight percent said they wanted to see a two-state solution to the decades-long conflict.

The political scene is poised to set obstacles too. Parliamentary elections are expected in Jordan on 10 November and the country's Islamists, known for their anti-US and anti-Israel stance, are readying themselves for a battle. If they win enough seats they'll have a say in many political issues, including foreign relations.

"Luckily for Jordan, it hasn't been through the traumatic events of the Arab Spring [which erupted in other Middle Eastern countries in 2011 - ed.]. But this is also the reason why they still stick to their past views of nationalism and pan-Arabism, notions that have largely been abandoned by others", claims Inbari.

This is why Inbari thinks the changes, if they end up being implemented, will be "slow and gradual" and the authorities will need to wait until after the US presidential race.

"If the winner of that race will be Trump, we will see changes. How will he do that? Simple. Money and a lot of it", predicts Inbari.

In recent months Jordan's economy, which has never been strong, plunged into a deeper abyss due to the raging coronavirus pandemic.

The country's economy contracted by 3.6 percent in the second quarter of the year. Many have lost their jobs because of the restrictions aimed at curbing the outbreak of COVID-19 and experts predict that unemployment rates will climb to 35 percent by the end of 2020.

Being a rather poor country that relies on foreign cash injections, Amman might be lured by Washington's monetary propositions. The US already provides the Kingdom with more than $1 billion per annum.

Will that be enough to change Jordan's stance towards Israel? Inbari is doubtful.

"Our relations will not be what they used to be before. At the same time, they are not bad and both states cooperate on a number of levels. It is a pity it is not a love story and I can only hope that our ties will not deteriorate further".