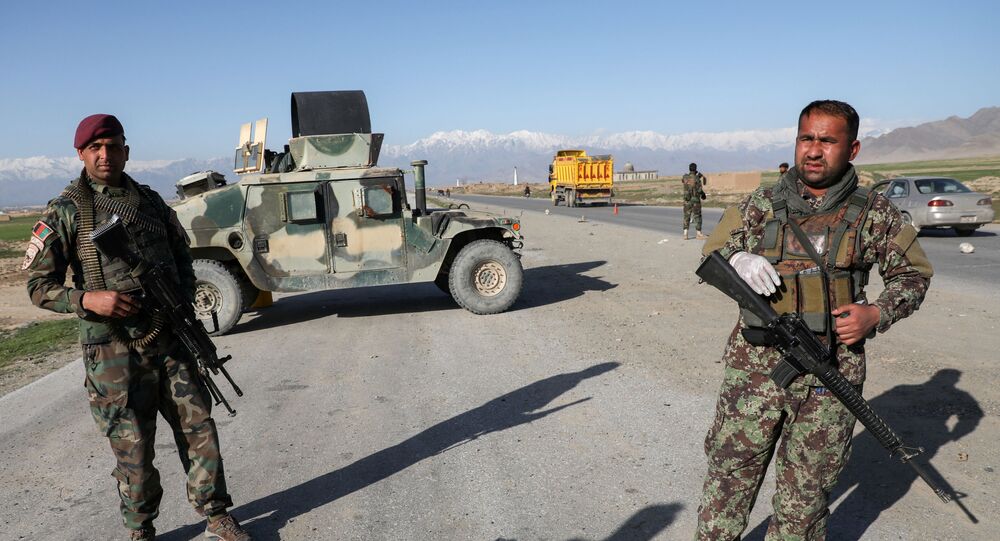 Earlier in the day, the broadcaster cited Jawad Hijri, spokesman for the regional governor, who said that the clashes took place in the Baharak and Khwaja Ghar districts of the province.

At that time, Hijri said that 16 Taliban militants and 17 security forces personnel, including the deputy provincial police chief, were killed in the clashes, the broadcaster said.

Elsewhere in the country, 12 Afghan women died in the city of Jalalabad after a stampede broke out at a soccer ground where thousands of people had gathered to apply for Pakistani visas, the broadcaster cited Attaullah Khogyani, spokesman for the Nangarhar provincial governor, as saying.

© AP Photo / Rahmat Gul
US Forces in Afghanistan Deny Violating Taliban Peace Deal With Helmand Airstrikes
Khogyani stated that 13 others, including 10 women, suffered injuries in the incident, the broadcaster said.

Pakistan's ambassador to Afghanistan, Mansoor Khan, offered his sympathies and pledged to work with the Afghan authorities to establish better conditions for visa applicants, according to the broadcaster.

Bomb blasts and violent clashes continue to ravage Afghanistan, causing deaths among civilians and the security forces, despite the ongoing peace talks in Qatar between the Afghan government and the Taliban.