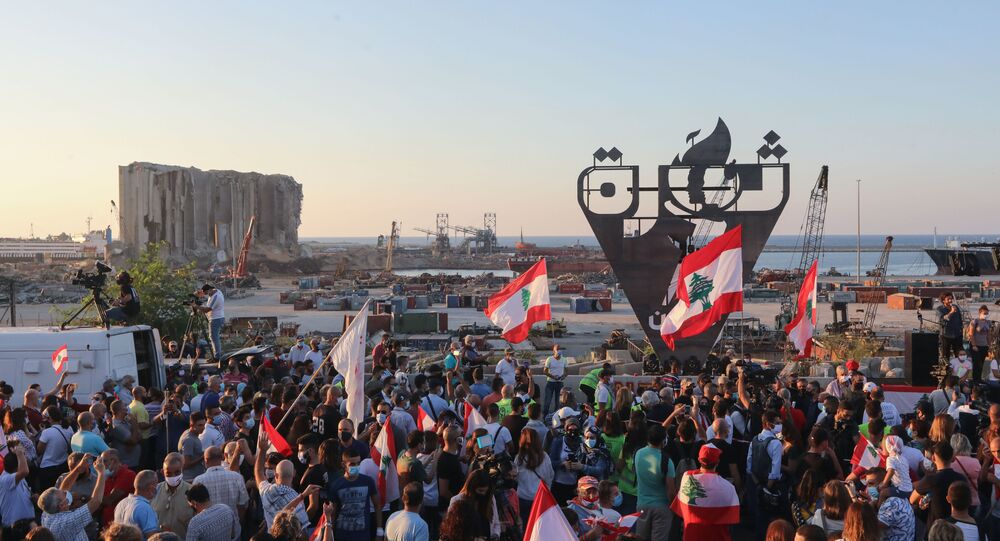 CAIRO (Sputnik) - Police in Lebanon’s capital Beirut on Saturday used tear gas against protesters who were marking the one-year anniversary of the uprising in the country, media reported.

According to national broadcaster Al-Jadeed, the tear gas was deployed outside Lebanon’s central bank in Hamra street, where demonstrators had gathered to protest the dire economic situation.

Separately, citizens gathered in central Beirut’s Martyr’s Square where they unveiled a special torch monument to commemorate the movement, largely referred to as revolution. They lit the torch at 6:07 p.m. (15:07 GMT) to commemorate the victims of the Beirut port explosion in August this year, which killed around 200 people.

© AFP 2020 / ANWAR AMRO
Lebanese protesters lift a banner demanding the resignation of 120 politicians, during a demonstration marking the one year anniversary of the beginning of a nationwide anti-government protest movement, in the capital Beirut on October 17, 2020. - Hundreds marched in Lebanon's capital to mark the first anniversary of a non-sectarian protest movement that has rocked the political elite but has yet to achieve its goal of sweeping reform.

The mass uprising began on 17 October 2019, when the government announced it was exploring a host of new taxes to alleviate the dire economic demonstration, including a tax on WhatsApp calls.

Unaligned citizens from the civil society took to the streets across the country to protest endemic corruption and economic mismanagement as a result of a fractious sectarian political system.

The unrest led to the resignation of the government of Prime Minister Saad al-Hariri. The subsequent government, headed by Hassan Diab, was largely dogged by party alliances and patronage.

Hyperinflation has since seen the local currency shrink ten-fold and lead soaring unemployment and poverty.

Protests were interrupted by a nationwide lockdown due to the pandemic but anti-regime protests have continued sporadically across the country.