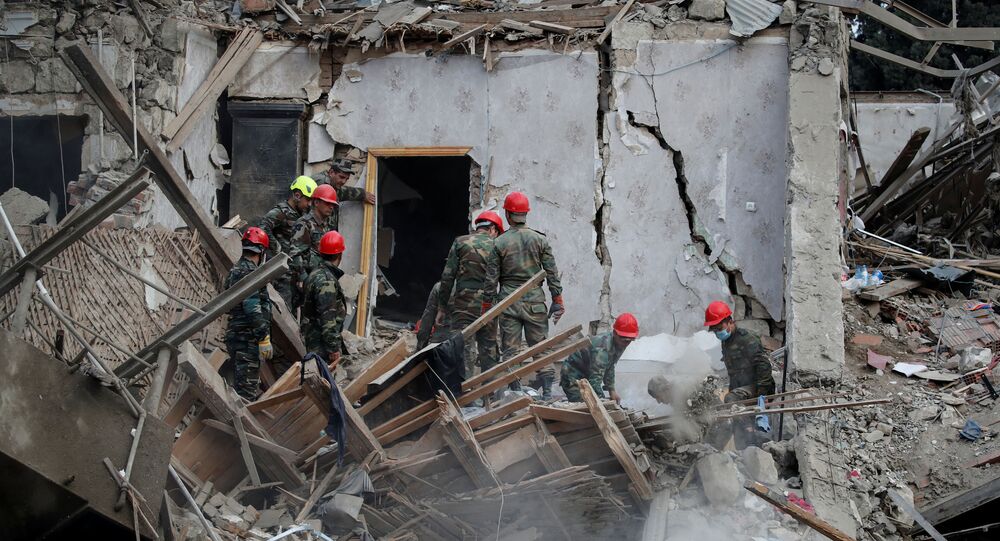 ANKARA (Sputnik) - Turkish Foreign Minister Mevlut Cavusoglu called shelling of Azerbaijani cities by Armenia amid the escalation of tension in conflict-torn Nagorno-Karabakh region war crimes, adding that those responsible will be held accountable.

"Armenia still commits war crimes&massacres civilians. Kills innocent people incl. children. Silence against this atrocity equals sharing responsibility of these murders. Those who have no humanity will be held accountable for their crimes. Will always stand by brotherly #Azerbaijan", Cavusoglu wrote on Twitter.

In the early hours of Saturday, Azerbaijani presidential assistant Hikmet Hajiyev said that the Azerbaijani cities of Ganja and Mingecevir came under missile attacks. According to the emergency services, 13 bodies have been recovered from the rubble in the wake of the attack, while over 50 people were injured.

The Armenian Defence Ministry maintains that its military has not shelled the Azerbaijani territory.

Hostilities on the contact line in Karabakh have been ongoing since 27 September, with Yerevan and Baku accusing each other of starting the firing. The international community strongly condemned the escalation and called on the parties to settle the differences via dialogue, while Turkey has pledged its full support for Azerbaijan.

The hours-long talks between foreign ministers of Russia, Armenia and Azerbaijan held in Moscow last week led to a humanitarian ceasefire in Karabakh that started the following day. The parties agreed on a pause in order to exchange prisoners and the bodies of killed soldiers, as well as negotiate the additional details of the ceasefire. However, hostilities resumed on the same day.