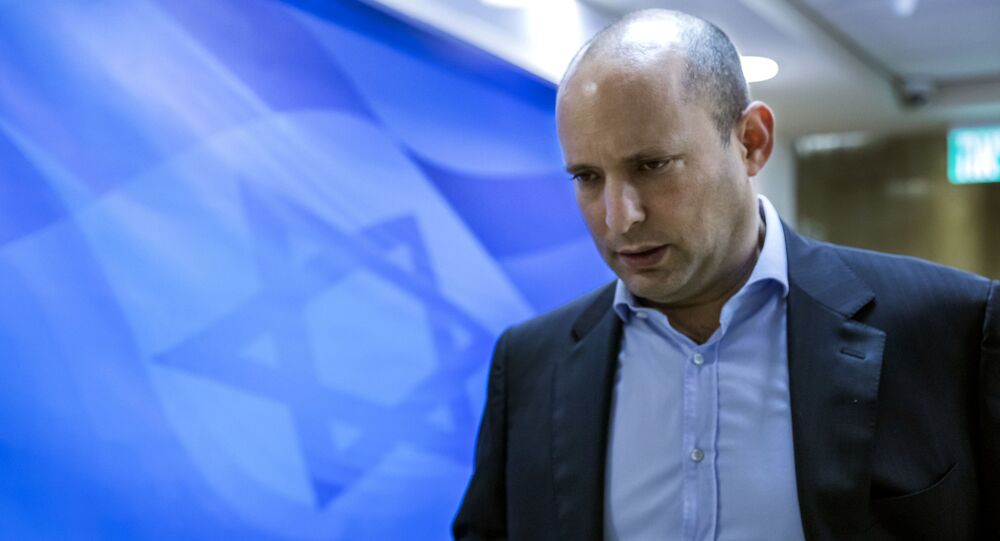 While many in Israel regard the former defence chief as a potential replacement for Benjamin Netanyahu, Palestinians are dreading that prospect, says a Ramallah-based expert. The prime reason for this is his hawkish views and zero compromise on key issues including Jerusalem and Jewish settlements.

For many Israelis, the country's former defence minister, Naftali Bennet, is associated with the battle he now leads against the raging coronavirus.

Vocal about how the current government is mishandling the pandemic, Bennett seems to be offering an alternative.

Several months ago, he was the one who set up the so-called civilian coronavirus cabinet, comprised of medical professionals and economists that offered tangible solutions.

And now, as Israel has been hit by the second wave of the pandemic, he's making sure to tour towns and cities affected by the virus, visit local hospitals, and talk to people to hear out their concerns and frustrations, a stark contrast to Prime Minister Benjamin Netanyahu, who is rarely seen on the ground.

This flurry of activity appears to be bearing fruit. In mid-September, a Channel 13 survey showed Netanyahu, who is being held responsible for the mismanagement of the pandemic, sinking in the polls and only getting 30 of the 120 seats in the Knesset.

In contrast to him, Bennett only became stronger, receiving 22 seats in the same survey, an absolute record since he entered politics.

However, less than a month later, he broke that record too. Another Israeli survey revealed that had elections been held these days, Bennet would have received 23 seats, compared to Netanyahu's 26, a significant drop from the 36 his party received in the last round of elections held in March.

Challenging the prime minister with these figures, Bennett is positioning himself as Netanyahu's natural replacement, prompting excitement among Israel's liberal circles, who are determined to see current PM leave office.

Bennett - a Disaster for Palestinians?

But the prospect of getting Bennett as a prime minister is perceived as a "disaster" by Palestinians, who are concerned about the path Israel would be taking under his leadership.

Hani Al-Masri, director of the Masarat Centre for Research and Studies in Ramallah, believes Bennett is an extremist, who cares little about the rights of the Palestinians.

Al-Masri's concerns are understandable, especially given that the political platform of Bennett's party Yamina doesn't leave room for skepticism of what his intentions are.

Apart from not being willing to budge on the issue of Jerusalem which he considers as the unified and undivided capital of "Israel only", he also rejects the notion of Palestinian prisoners' release and speaks in favour of the Jewish state's continued expansion in the disputed West Bank.

Palestinians had a glimpse of what the future might hold for them during his short term in the Defence Ministry.

Back then, he supported the IDF, when it seized the body of a Palestinian killed while placing a bomb at the Gaza border fence, writing on Twitter that he was sick "of the hypocritical left-wing criticism of the 'inhumanity' of using a bulldozer to bring us the body of a terrorist who tried to murder (!) Israelis".

Another manifestation of his attitude towards Palestinians was seen last December. At that time, he approved the construction of a new Jewish neighbourhood in Hebron, sparking strong criticism from Palestinian rights organisations.

A month later, he rejected US President Donald Trump's peace plan stipulating that Israel would extend its sovereignty over some 30 percent of the West Bank, saying the initiative jeopardised his country's security as it paved the way for the creation of an independent Palestinian state on the territories that he considered Jewish.

It was for these reasons that Al-Masri says Israel's current prime minister is far better than Bennett.

"Of course, neither of them cares about the rights of the Palestinians. But Netanyahu is more experienced and he is more flexible because he postponed his annexation plan. If it was up to Bennett, he would have never let it slip".

Looking at the entire Israeli political spectrum, the expert doesn't pin his hopes on the Jewish state's parties and politicians to bring about the much-needed change.

For him, Israel doesn't have "a partner" but the lack of a peace process cannot be blamed on only Israeli politicians, and Al-Masri emphasises the need for Palestinian unity to confront the Jewish state.

"We are weak and fragmented and nobody will take us seriously now. For this to change, we need to get united. Then we need to develop a new strategy. Armed resistance didn't prove itself, so we need a combination of elements, the primary of which is international pressure. But that, of course, will take time".