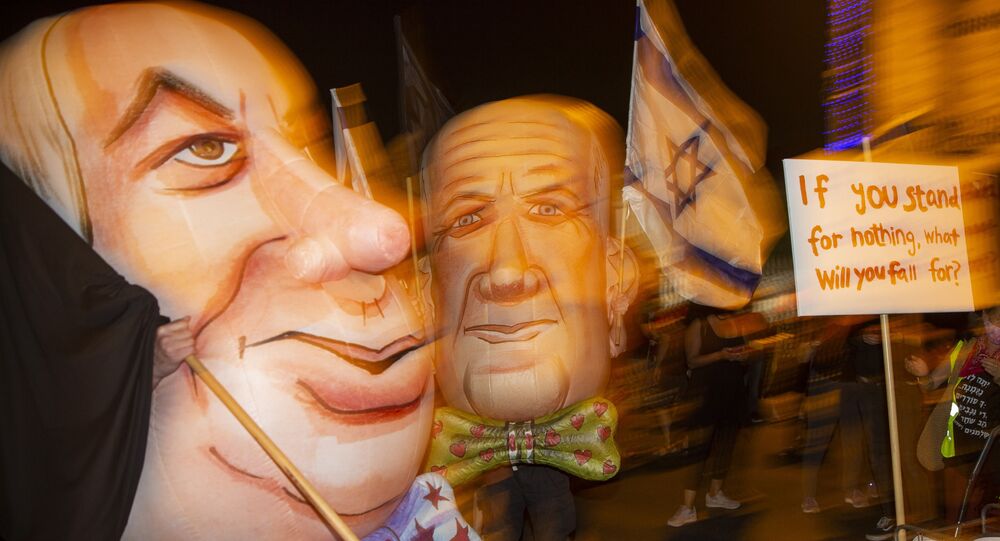 The Likud/Blue and White unity Government was forged in May after three consecutive elections between April 2019 and March 2020 failed to allow either party or its allies to form a majority. In the months since, tensions fuelled by a row over the budget and protests related to corruption charges against the Prime Minister have split the coalition.

Senior Likud Party Knesset member and coalition chairman Miki Zohar added fuel to speculation of an imminent breakup of Israel’s coalition government on Sunday, saying that the Blue and White Party was “not a coalition partner anymore,” but “a danger to Israel” and that “elections are an excellent option".

“Blue and White have made a deal with [Yair] Lapid [the chairman of centrist political party Yesh Atid] to form a government with the Joint Arab List. This is a new low for them. They should be ashamed,” Zohar suggested, his remarks to Radio 103FM quoted by Israel Hayom and The Jerusalem Post.

Blue and White responded to Zohar's comments later on Sunday, saying “Miki, even in Likud you are not taken seriously. Keep blabbering on because this is the only thing you know how to do, and not very successfully either.”

Zohar’s comments follow the release of a statement by Blue and White warning that they would not tolerate any more delays to a vote on the state budget, with the issue splitting the two major governing parties for months now. Fresh elections will be called automatically if the parties don’t come to an agreement by 23 December.

© REUTERS / RONEN ZVULUN
Israeli Demonstrators Clash With Police as Tens of Thousands Protest Against Government
On Monday, Yair Lapid is expected to call a no-confidence vote against Prime Minister Benjamin Netanyahu’s Government on account of the ongoing protests against the PM over alleged bribery, fraud and breach of trust, as well as his handling of the coronavirus. In recent days, Yesh Atid has been openly lobbying Blue and White politicians to retract their pledge to vote against a no-confidence motion.

“If [Blue and White leader, Benny] Gantz and [Foreign Minister, Gabi] Ashkenazi decide to support it, on the very same night (yes, the very same night!) Benjamin Netanyahu will leave [his home on] Balfour Street,” Lapid wrote in a recent post on Facebook. “The noise will stop, the distress will disappear. The new government will be sworn in at the President’s Residence and start working. It will deal only with two things: health and the economy. It will be limited in time – 18 to 24 months. We will suggest that all parties join it. It will be substantive and effective. It could be formed in a week,” Lapid added.

The personal animosity between Netanyahu and Gantz escalated last week after the two exchanged a series of fiery tweets accusing one another of "sowing chaos" and playing politics instead of dealing with the crises facing the country.

Likud and Blue and White, the two largest parties in the 120-seat Knesset, agreed to form a coalition government in May, but have ended up facing off over the budget, with Likud seeking a budget only for the remainder of 2020, whereas Blue and White wants one for the rest of the year and for 2021. Both sides claim their approach is the correct one amid the economic and social dislocation caused by the coronavirus pandemic.

Israel has held three rounds of parliamentary elections since April 2019, with none of them allowing either major party to form a government. President Reuven Rivlin has repeatedly criticised politicians over the budget deadlock, and demanded that the parties stop bickering and unite to provide leadership in the face of the crisis.

Israel Will Oppose Any US Sale of F-35s to Qatar, Cabinet Minister Says