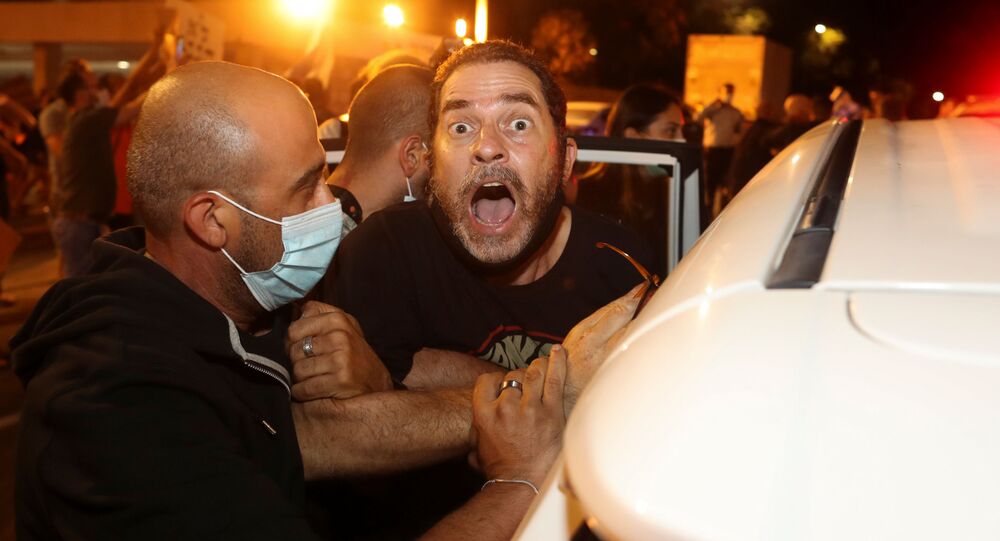 TEL AVIV (Sputnik) - Tens of thousands of people protested against the government of Prime Minister Benjamin Netanyahu across Israel on Saturday, clashes between demonstrators and law enforcement officers were reported in Tel Aviv, police said.

Protesters in Tel Aviv were throwing various objects at police officers and clashing with law enforcement representatives on Saturday, police said in a statement, adding that the demonstration was unlawful.

According to The Times of Israel and other Israeli media reports, an estimated 200,000 people participated in the Saturday protests held across Israel.

At the end of last month, fresh coronavirus restrictions came into force in Israel, building up on the new lockdown introduced on 18 September. The new lockdown measures will be in force until 14 October, with a possibility of extension. According to Israeli media reports, some towns with high coronavirus infection rates, as well as some neighborhoods in Jerusalem, will remain under lockdown past 18 October.

Protests calling on Netanyahu to step down amid an economic crisis caused by the coronavirus pandemic have been ongoing since July. Last weekend, nearly 40 protesters were detained amid anti-government demonstrations in Tel Aviv.

Israel’s Knesset has approved an amendment to the coronavirus law allowing to limit protests to no more than 20 people who live within one kilometer (0.6 miles) of a planned demonstration.

Israeli Man Who Lost His Mother in Palestinian Suicide Attack Opens Up About His Loss, Anger & Pain