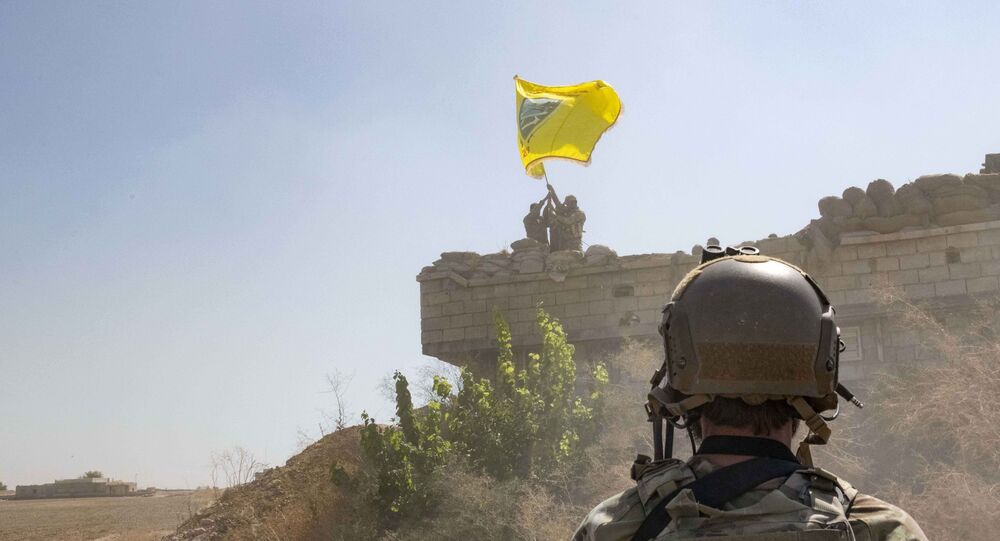 The Trump administration has not made good on its promises to draw down US troop numbers in Syria, and instead has sent dozens of convoys of military equipment and supplies into the war-torn country via Iraq while smuggling out hundreds of millions of dollars’ worth of stolen Syrian oil.

US forces acting in concert with majority-Kurdish Syrian Democratic Forces (SDF) militia have reinforced their positions in the Ghweiran neighbourhood of Hasakah city, northeast Syria amid tensions with local residents, a Syrian Arab News Agency correspondent has reported.

According to the reporter, at least six vehicles and trucks entered Hasakah from the south as US helicopters flew overhead. The convoy was said to be meant to help reinforce local administration buildings, schools and other facilities being held by US and SDF forces.

The convoy’s deployment follows reports last week that the US military sent a convoy of 55 vehicles, including refrigerator trucks and transports as well as 13 military vehicles, to the city of Qamishli (situated near the Turkish border about 75 km northeast of Hasakah city).

Also Saturday, SANA’s correspondent reported that the SDF had seized a number of houses in Ghweiran and kidnapped multiple local residents, including women, in a section of the neighbourhood containing housing for local police officers, as well as youth residences in the nearby al-Zuhour neighbourhood.

© Photo : Pixabay
Trove of Docs Leaked by Anonymous Shows How Western Intel, PR Firms Crafted False Syria Narrative
According to local residents, the SDF and its US allies have occupied key buildings in Hasakah city, including the local electricity provider and grain storage facilities, multiple government offices, banks, schools, and the local prison containing Daesh (ISIS)* inmates. Last month, local teachers and students staged a large sit-in in front of Hasakah’s education directorate to protest the SDF takeover of schools, accusing the US and the militia of deliberately trying to deprive local residents of an education.

At the same time, in the north of Hasakah province, locals have reported widespread looting, assassinations, bombings, and arson by Turkish-backed militias. In August, Syriac Orthodox Patriarch of Antioch Ignatius Aphram II appealed to the United Nations to accuse the militias of a “flagrant violation of the human rights” by cutting off water supplies to over a million residents of northeast Syria and of a range of other crimes.

People of Tal Sateeh village in #Qamishli countryside, #Hasakah, on Thursday organized a gathering against #US and #Turkish occupations, calling on the two occupiers to leave #Syria. pic.twitter.com/9BLEXpEBx0

As the home to the vast majority of Syria’s oil and gas resources, the provinces of Hasakah and Deir ez-Zor have become a focal point for tensions between the Syrian government, the SDF and the foreign occupation forces present in the region. The region has also witnessed multiple tense encounters between Russian military police and US troops illegally stationed in the region.

Another "meeting" of US and Russian forces in northeast Syria. "This is Syrian territory. The Russian armed forces are here at the invitation of Bashar al-Assad. On what grounds are the Americans here?" - the Russian military police ask.pic.twitter.com/P3Ei3e0Y0Q

The Damascus government has repeatedly called on all foreign forces which it has not invited into the country to leave Syria immediately, and accused the US and its Kurdish allies of plundering Syria’s oil. The Trump administration has rejected the Syrian government’s grievances, with President Trump himself repeatedly promising to “keep” Syria’s oil and prevent it from being transferred into the hands of either the government or terrorist remnants.