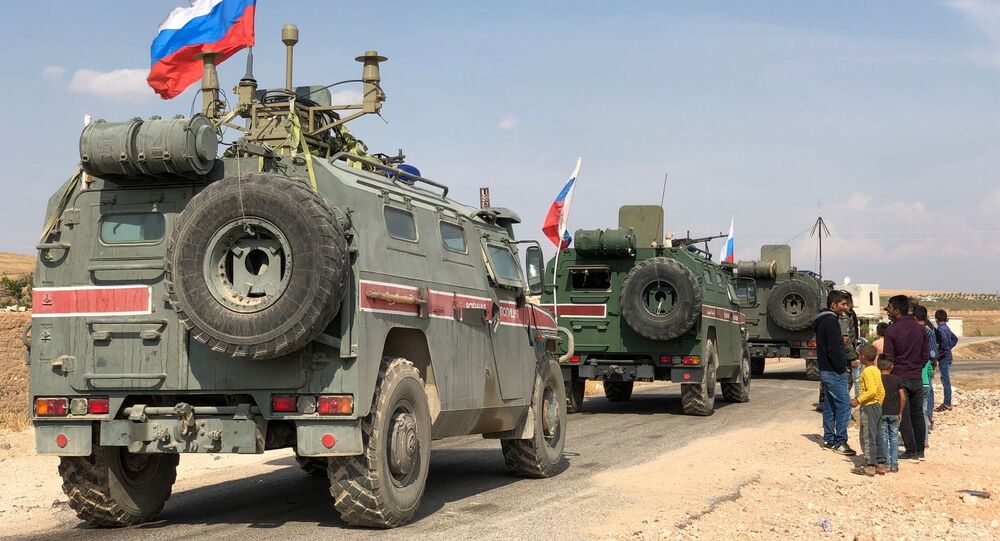 DAMASCUS (Sputnik) - The war in Syria will continue until every part of the nation's territory is liberated from terrorists, Syrian President Bashar Assad told Sputnik, recalling how Russia's involvement in the conflict at Damascus' request changed the course of events and resulted in a massive counterterrorist advance.

Russia's military assistance to Damascus is marking its fifth year. Sputnik asked the Syrian president whether after these five years he could say the war was over.

"No, definitely not. As long as you have terrorists occupying some areas of our country and committing different kinds of crimes and assassinations and other crimes, it's not over, and I think their supervisors are keen to make it continue for a long time. That's what we believe", Assad replied.

The Syrian president listed Russia's entry into the war as one of three key turning points, together with the first liberation of lands from Nusra Front terrorists* in 2013 and then the sudden emergence of Daesh* with the United States' backing and their subsequent grab of important areas in 2014.

"Then the other turning point was when the Russians came to Syria in 2015 and we started liberating together in many areas. In that stage, after the Russians came to Syria to support the Syrian Army, I'd say the turning point was to liberate the eastern part of Aleppo — this is where the liberation of other areas in Syria started from that point. It was important because of the importance of Aleppo and because it was the beginning of the liberation — the large-scale liberation that continued later to Damascus, to the rest of Aleppo recently and other areas in the eastern part of Syria and the southern part", Assad said.

© AP Photo / Alexei Nikolsky
In this Jan. 7, 2020 file photo, Syrian President Bashar Assad listens to Russian President Vladimir Putin during their meeting in Damascus, Syria. Assad interrupted a speech he was giving to Parliament after he suffered a brief drop in blood pressure, the Syrian presidency said Wednesday, Aug. 12, 2020

Asked whether he could distinguish any particular acts of heroism by the Russian military in the Syrian war, the president said "there are so many", going on to recall how Russian pilots "kept flying over the terrorists on a daily basis, risking their lives, and you had a few aircraft that were shot down by the terrorists".

"After five years of this cooperation between the Syrian and the Russian armies in a vicious war, I think heroism is becoming a collective act", Assad said. "What I'm going to tell my grandchildren someday is not only about this heroism but I'm also going to talk about the common values that we have in both our armies that made us brothers during this war, these noble values, faithful to their causes, defending civilians, and defending the innocent".

The war in Syria is in its ninth year. In August 2015, Damascus asked Moscow for military assistance in countering the armed opposition forces, including terrorist organisations. Russian forces have been providing assistance on the ground and monitoring the ceasefire as well as facilitating the return of Syrian refugees and restoration of normalcy.

No Iranian Troops in Syria

The United States is using the allegation that Iranian troops are present in Syria as a present to continue its own illegal military presence and support of terrorists, Assad added.

The Syrian president was asked to comment on the US' stance that Iran's withdrawal from Syria must be a precondition of the restoration of the international cooperation with Damascus and the recovery of its economy.

"First of all, we don't have Iranian troops and that is very clear", Assad said.

As emphasised by the Syrian president, Iran's assistance to Damascus is limited to sending military experts who work with the Syrian troops on the ground but do not engage in the fighting.

"The Iranian issue is a pretext for occupying Syrian land and supporting terrorists," Assad stressed.

As a case in point, he spoke about how the US had asked the Russian authorities last year to "convince the Iranians that they should be 80 kilometres [50 miles] away from the border with the Golan Heights", an Israeli-controlled former Syrian territory, in exchange for the de-occupation of the Al-Tanf area on the Syrian-Iraqi border. According to the Syrian president, Iran easily agreed — since there were no Iranian troops there anyway — but the US troops never withdrew from the area in question.

Israel established military control over the Golan Heights in 1967 and annexed it in 1981, albeit the annexation was never recognized by the United Nations. The Golan Heights is widely seen as an exceptionally important strategic area, chiefly due to the fact that it offers a clear view on both Syria and Israel.

US Elections and Lobbyism

The Syrian president also told Sputnik he does not expect the upcoming presidential election in the United States to result in a change of policy toward Damascus, because he believes that America's foreign political agenda is dominated by lobbies regardless of who is in the White House.

"We don't usually expect presidents in American elections, we only expect CEOs", Assad said when asked whether he expected Washington's policies with Damascus to change in any way following the 3 November presidential election, specifically on lifting the economic sanctions.

According to the Syrian president, there is a decision-making "board" in the US that has enough leverage to push for the interests of banks, arms traders, corporations, and other influential lobbies, sidestepping all three branches of government.

"As I said, this board is made up of the lobbies, so they implement whatever they want, and they control the Congress and the other [state institutions], and the media, etc. There is an alliance between those different self-vested interest corporations in the US", Assad said when asked to elaborate on who exactly is involved in the board that he referenced.

"So what you have is a CEO, and this CEO doesn't have the right or the authority to review — he has to implement. And that is what happened to [US President Donald] Trump when he became president after the elections [in 2016]", the Syrian president added.

As a case in point, Assad recalled how the impeachment process was launched against Trump when he attempted to "pursue his own policy".

"He [Trump] had to swallow every word he said before the elections. That's why I said you don't expect a president, you only expect a CEO. If you want to talk about changing policy, you have one board — the same board will not change its policy. The CEO will change but the board is still the same, so don't expect anything", he said.

Assad expressed surprise over US President Donald Trump's nomination for the Nobel Peace Prize, doubting that any grounds exist for giving the prestigious award to his American counterpart.

"He's nominated?", Assad exclaimed when asked by the interviewer what he thought of Trump's Peace Prize nomination after he failed to implement his pledge to withdraw US troops from Syria.

"I didn't know about this. If you want to talk about the nomination for peace, peace is not only about withdrawing your troops. It is a step — it is a good step and it is a necessary step — but peace is about your policy and it is about your behaviour. It means to stop occupying land, to stop toppling governments just because they are not with you, to stop creating chaos in different areas of the world. Peace is to follow international law and to support the United Nations Charter. This is peace, this is when you deserve the Nobel Peace Prize", Assad continued.

The Syrian president then brought up the 2009 Nobel Peace Prize awarded to then-US President Barack Obama, who Assad said "had just been elected [at that point] and had not done anything", except for "mov[ing] from his house to the White House".

"They will give it to Trump for something similar. I don't know what is it, but definitely not peace", the Syrian president added.

White Helmets as "Tools For Terrorism"

"The White Helmets are just the tools or the means — the weapon that has been used for terrorism. They were created by the United Kingdom, supported by the United States and, of course, France and other Western countries, and used directly by Turkey," Assad said.

It is these countries — the "father and mother" of the White Helmets — which have to be held liable for the terrorism and other atrocities waged by this group in Syria, the Syrian president said.

Speaking liability, the Syrian president appeared pessimistic about the prospect of justice in this case due to the lack of compliance mechanisms in international law.

"Now, the question is do we have international laws to pursue such procedures? No, we don't", Assad said.

© AFP 2021 / AMER ALMOHIBANY
Members of the Syrian Civil Defence, known as the White Helmets, take a selfie with their certificates after taking part in a training session in the rebel-held eastern Ghouta area, east of the capital Damascus, on November 22, 2016

As a case in point, he cited how the US managed to "get away with its crimes" in Iraq, Yemen, Syria and elsewhere. "Not only the United States but also France, the UK and different countries," he added.

Asked whether Damascus intends to initiate any legal action against the White Helmets specifically, the Syrian president replied: "Yes, of course, they are criminals."

Addressing the upcoming presidential election at the beginning of next year, Assad stressed he has not decided if he will run yet.

"It's still early to talk about it because we still have a few months. I can take this decision at the beginning of next year", he noted.

Syria is due to hold a presidential vote next spring.