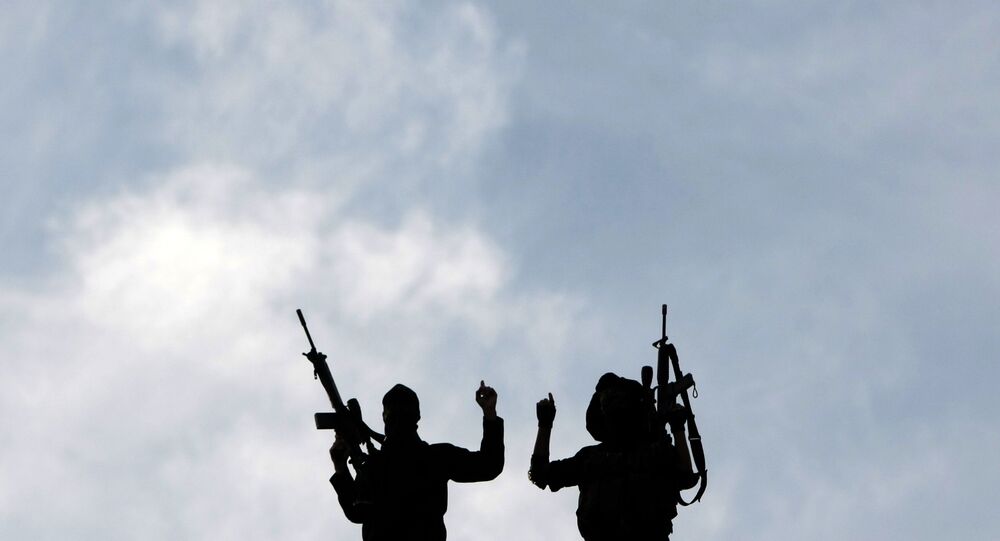 The year 2020 has seen a surge in gun violence in the Gaza Strip, with a local NGO registering 13 accidents involving illicit weapons since the beginning of the year. And although the enclave's security forces are trying to contain the spread of the phenomenon, unlicensed guns continue to claim the lives of civilians.

Mohammed Al Bilbisi from the city of Gaza has never considered the Strip a safe haven but the outbreak of the coronavirus has only made the situation worse.

For Mohammed the situation spiralled out of control in late July, when he lost his three-year-old daughter as a result of the gun violence that has been raging in the enclave.

"My daughter was playing outside of our house while we were inside. Suddenly we heard an exchange of fire and when we rushed out, we saw that our child was covered in blood", he recalled.

Although Mohammed did manage to get his daughter to a local hospital, the doctors couldn't do much to save her, shattering the couple's life.

"The wounds are still fresh. I remember her words and her smiles and I struggle to understand why she is not around with us anymore".

Blaming her death on the government in Gaza for "failing to address the issue", Mohammed is also pointing the finger at "all the Palestinian factions" who allow their members to keep illegal arms.

According to Palestinian legislation, only members of the security apparatus are entitled to carry arms. The act of possessing illegal weapons is punishable by law and those caught might face heavy fines and up to three years in jail, provided they haven't killed anyone or didn't cause any injury.

In reality, however, Gaza's security apparatus is struggling to control the amount of weapons floating around or punish those, who obstruct public order, thus bolstering those groups and families that possess illegal weapons.

© CC BY-SA 3.0 / Gellerj / Israel Police squad car
Despite High Number of Licenses, Israel Won't Join Club of Countries Known for Gun Violence
The problem of illicit arms is nothing new in Gaza. Local authorities have made multiple attempts to address the issue in the past.

In 2003, for example, several years before Hamas took over the Strip, the Palestinian Authority launched a campaign that aimed at collecting all of the illegal arms in the enclave. Back then they arrested more than 20 culprits but it didn't deter others. Nor did it solve the problem.

Years later, in 2014, the Egyptian Army, which had long been concerned with the smuggling of illicit weapons through its territory, destroyed a number of tunnels that were owned by Gazan families, who used them to import unlicensed arms from Egypt into the enclave and then sell them to citizens for personal protection purposes. But just like previous attempts, those efforts too were largely futile.

Now, this problem has magnified itself and is a burden on Gaza's authorities. Apart from the Strip having a weapons market, where illicit arms are sold undercover, unlicensed guns are also offered on social media pages, luring customers with appealing deals.

The Facebook page Gaza Arms Market, for instance, has more than a thousand followers and it is where Gazans can choose from a selection of pistols, machine guns, and even grenades.

This "abundance" comes at a price. According to the Al Mezan Centre for Human Rights, 2020 has registered a rise in the amount of accidents involving illegal arms.

Since January the NGO has registered 13 such cases, compared to 9 such accidents last year.

Addressing the issue, Gaza police spokesman Ayman Al Batniji acknowledged the problem in the Strip and put the surge down to the "harsh reality Gazans have been living under".

"Most of the criminals were under psychological pressure because of the deteriorating situation in the Strip, and it is normal that when people live under instability, crime rates only go up", he explained, adding that the police are doing everything they can to arrest the perpetrators and confiscate their weapons.

But for Mohammed these measures are simply not enough. Those responsible for the killing of his daughter have never been found, and the man believes that even if they do face trial one day, Palestinian law, "coupled with unfair traditions, will not give them the sentence they deserve".

"Even if they find them and arrest them, they will be thrown into a cell for a limited period of time. Then their families will come to me and ask for forgiveness. This is always the case in such stories involving accidents. But nothing will bring my child back".