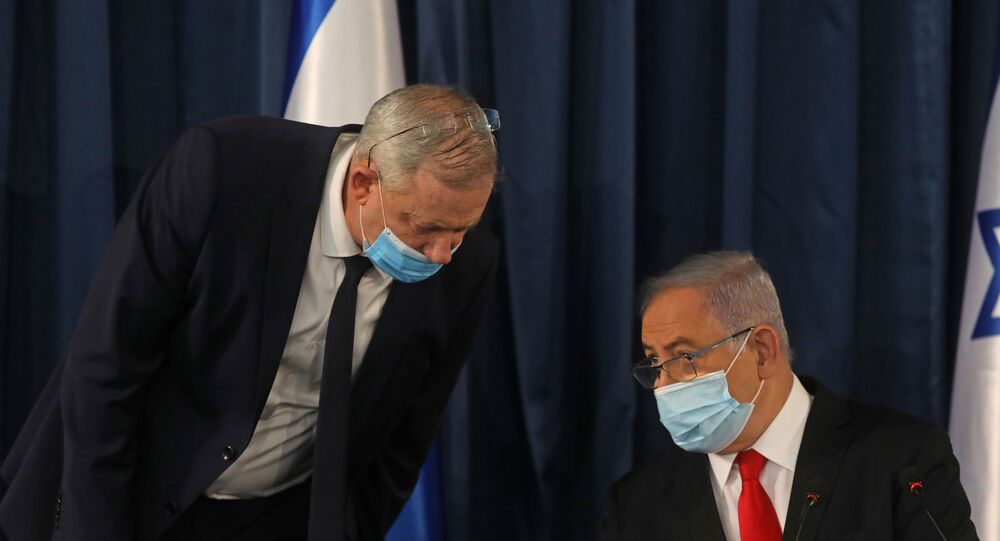 Elections in the Air: How Likely is Israel to Head to Another National Vote?

The coalition between Netanyahu and Gantz has shown cracks since the moment of its inception, with gaps between the two leaders growing ever wider now, as they struggle to agree on everything from the way Israel should be handling the pandemic to the nation's budget.

For a month and a half Israel has been busy conducting peace talks with the United Arab Emirates and Bahrain which has been stealing the headlines and pushing other topics to the sidelines.

But now that the deals have been inked and the peace process is starting to yield results in the form of economic agreements, the whiff of elections currently in the air has once again taken over the country's discourse.

On Sunday, the tones between Prime Minister Benjamin Netanyahu and his coalition partner Benny Gantz once again spiked, with the two exchanging a number of fiery messages on Twitter.

"Blue and White [the party of Gantz - ed.] are breaking the unity government and sowing chaos during a national emergency just to garner leftist votes for their party that is collapsing in the polls", Netanyahu's Likud said in a statement, referring to a recent survey that suggested a decline in Gantz's popularity.

The background for this bickering is the resignation of Israel's tourism minister, Assaf Zamir, a member of the Blue and White, who stepped down over Netanyahu's alleged indifference in handling the coronavirus pandemic. The latter has already claimed the lives of more than 1,500 people.

© REUTERS / AMMAR AWAD
How Netanyahu and Gantz Have Clashed on Sovereignty Extension Over Palestinian Territories
"I am worried about this country, which is currently on the edge. And it is clear to me that this situation won't change as long as Netanyahu stands at the helm", he wrote explaining his resignation.

Zamir's concerns are shared by many in Israel: thousands of protesters, who have been engulfing Jerusalem and Tel Aviv for weeks demanding Netanyahu's resignation continue to take to the streets despite strict regulations limiting rallies amid the COVID-19 pademic.

Polls have also shown a disapproving trend. In July, a survey revealed that 62 percent of those asked were unhappy with the way Netanyahu has handled the economic crisis that followed the outbreak of the pandemic in late February. Forty-nine percent held similar views when asked about the PM's tackling of the health situation in the country.

Now, as dissatisfaction continues to mount, and the government struggles to agree on the way the pandemic should be handled, COVID-19 might soon claim another victim - that of the already fragile Netanyahu-Gantz coalition.

The deadly virus, however, is not the only reason for the instability of the Netanyahu government. Cracks in Bibi's partnership with Gantz have been seen since their joint venture started in May.

One of the most recent examples was the secret deals Netanyahu inked with the UAE and Bahrain, all behind the backs of Gantz and his Foreign Minister Gabbi Ashkenazi, both of whom were reportedly kept in the dark on the agreements.

© REUTERS / POOL New
Netanyahu Says He Didn’t Inform Gantz About UAE Negotiations Because of Security Considerations
Although Gantz swallowed that bitter pill and has taken a more compromising approach when dealing with Netanyahu, it now appears that his patience has come to an end.

Last week, he announced his party would push for the appointment of a new state attorney, a key figure involved in the investigation of Netanyahu's corruption cases.

The move not only breached the coalition agreement with Likud stipulating the putting off of any senior nominations to a later date, but it indicated that Gantz was on a collision course with the PM and that this time around he had no plans to back down.

Netanyahu is unlikely to agree to the candidate put forward by Gantz, something that is likely to trigger a break-up of their partnership.

Yet, if a compromise is reached and the partnership does stay afloat, the end of this year will be a real test for their joint adventure.

In December, the government is expected to pass the nation's budget, after similar attempts to do so failed several months earlier.

Yisrael Katz, Israel's finance minister, claims his office has already started working on the budget but doubts run high it will be completed on time for the Knesset to review it.

And even if it does meet the deadline, the chances that the partners, who agree to disagree on pretty much everything, will reach a consensus on Israel's budget are slim to none.