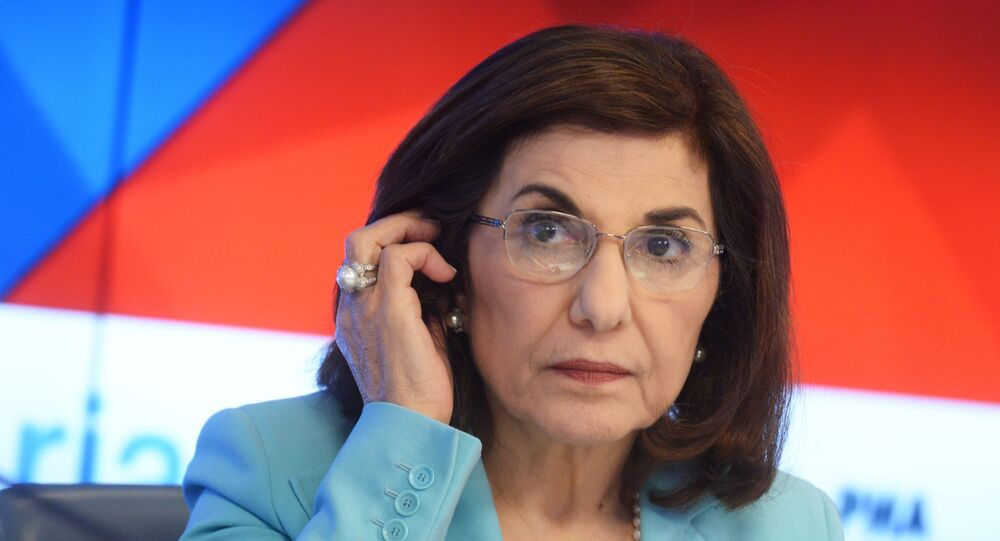 Bouthaina Shaaban, a political and media adviser to Syrian President Bashar Assad, has given Sputnik a wide-ranging interview on Middle Eastern politics. She spoke on issues such as Turkey's alleged involvement in the Nagorno-Karabakh conflict, anti-terror efforts in Syria, sanctions pressure against the Arab Republic, and other matters.

MOSCOW (Sputnik), Ksenia Shakalova - Bouthaina Shaaban, a political and media adviser to Syrian President Bashar Assad has accused Ankara of being the driving force behind the current conflict in the breakaway republic of Nagorno-Karabakh in an interview with Sputnik.

"Now we can see also in Nagorno-Karabakh that Turkey is really inciting the conflict there and [Turkish President Recep Tayyip] Erdogan’s statement shows that they support inciting this conflict between Azerbaijan and Armenia. Turkey incites and supports conflict because it envisions a bigger regional and international role for itself through feeding these conflicts and supporting them", Shaaban said.

The adviser listed Turkey's previous involvement in Iraq, Lebanon and Syria, alleging that Ankara is inclined to violate other countries' sovereignty.

The situation in Nagorno-Karabakh escalated on Sunday, when Yerevan and Baku accused each other of provoking military hostilities. Azerbaijan claimed that the Armenian Armed Forces had shelled settlements on the contact line in the area and Yerevan, which supports the breakaway republic of Nagorno-Karabakh, said the area had been subjected to attacks.

On Obligations on Idlib

Shaaban also accused Turkey of failing to fulfil its commitments in Syria's region of Idlib to separate opposition and terrorists and carry out joint patrols.

"Unfortunately, Turkey has not honoured this commitment aimed to separate between terrorists and opposition in Idlib and neighbouring area and neither honoured the agreement of the president signed by President Putin about Idlib and about M-4", Shaaban said.

The adviser criticised Turkey for deploying more armaments and troops in the province and coordinating with insurgent forces.

"It is very obvious to the Syrian people that all these terrorists are working in full coordination with Turkish operatives", Shaaban concluded.

Recent talks in mid-September between Turkish and Russian military officials in Ankara on the situation in Idlib have failed to produce and agreement, with Moscow torpedoing Ankara’s proposal to transfer the Syrian cities of Tall Rifat and Manbij under Turkish control, according to Turkish sources. Russian Foreign Minister Sergey Lavrov later said that Russian-Turkish agreements on Syria were not being implemented fast enough.

In 2018, Russian President Vladimir Putin and his Turkish counterpart, Recep Tayyip Erdogan, agreed on the creation of a de-escalation zone in Idlib, which included an obligation to separate the opposition from terrorists. Nevertheless, the deal was not fully implemented and fighting in the area continued. This March, the presidents agreed on a ceasefire in the province as well as setting up of a security corridor along the M-4 motorway, patrolled by Russian and Turkish forces.

On Russia's Role in Defeating Terrorism in Syria

Russia’s decision to join the anti-terror fight in Syria five years ago played a vital role in rooting out terrorism from large swathes of land, Shaaban stated.

"The entry of the Russians in 2015 beside the Syrian army was extremely important for defeating the forces of terrorism from large parts of Syria. We do appreciate all the sacrifices that the Russian military gave to Syria on the land of Syria", Shaaban said in an interview.

The official expressed a belief that this fight was being waged "on behalf of the entire world" for the sake of defeating global terrorism.

According to Shaaban, the fight is not over yet. The Arab republic, she stressed, will continue the battle "until we liberate every inch of the Syrian land."

On 30 September, Russia marks five years since the launch of its anti-terror operation in Syria at the request of President Bashar Assad.

The upcoming presidential election in the United States, whatever the outcome, is unlikely to change Washington's current stance of keeping Syria under economic sanctions, Bouthaina Shaaban added.

"I don’t think that change of president is going to change much of the American decision [on the Syrian sanctions] because it is governed by lobbies which historically governed the United States", Shaaban said.

According to the politician, these lobbies in the US have proved capable of advancing their agenda regardless of whether a Republican or a Democrat president is at the helm, specifically with regard to Washington's actions in Syria and the Arab-Israeli conflict.

"Syria was subjected to American sanctions and punishment since 1979 and there were so many American administrations which came along, and we even went into a peace process for 10 years with American [backing] and they never lifted any of the sanctions they took against us", Shaaban argued.

© REUTERS / MIKE BLAKE
1st Presidential Debate in US: How Trump Managed to Look 'Stronger' Than Biden in 'Slanging Match'

Syria has been designated a State Sponsor of Terrorism by the US since December 1979 over Damascus' alleged support for various terrorist groups, including the facilitation of their transit to neighboring countries.

In 2004, a new round of sanctions was imposed on Damascus by Washington under its 2003 Syria Accountability and Lebanese Sovereignty Restoration Act. Atop of asset freezes and ban of commercial flights to and from Syria, the US froze all exports to the Middle Eastern country, except for humanitarian aid. The US followed up with several more rounds of sanctions when the Syrian political disarray began in 2011, which would then escalate into a war that is still ongoing. The sanctions were imposed to deprive Assad's government of resources needed to resist militant opposition forces.

In 2020, the Caesar Syria Civilian Protection Act went into force in the US, targeting individuals or companies that cooperate financially with the Assad government. The Syrian Foreign Ministry said that the country and its people will resist all US sanctions as stubbornly as they have resisted terrorism.