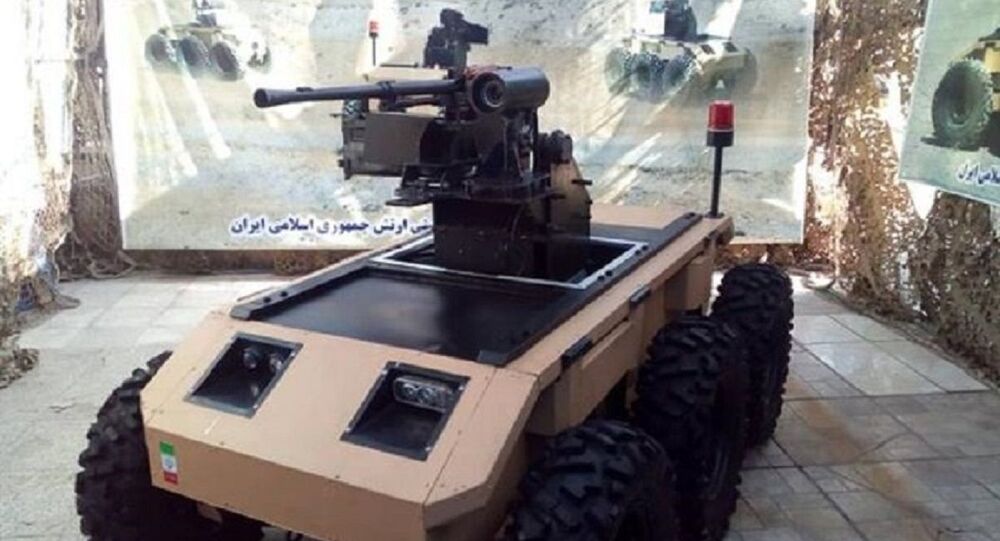 Last week, scores of Iranian-made unmanned aerial vehicles were put in service with the naval fleet of the Islamic Revolutionary Guard Corps (IRGC).

The Caracal robotic vehicle was on display at a Sunday ceremony in Tehran, which was attended by the Ground Forces' commander Brigadier General Kioumars Heydari, among other high-ranking Iranian military officials.

The robot, which moves with a maximum speed of 30 kilometres (18 miles) per hour, has an operating range of more than 500 metres (0.3 miles).

Caracal’s roll-out followed Iran’s Islamic Revolutionary Guard Corps (IRGC) Navy commander Rear-Admiral Alireza Tangsiri revealing last week that Tehran is building a new class of helicopter-carrying warship capable of operating in the world’s oceans. According to him, the 65-metre-long vessel will be unveiled in the near future.

Speaking at a ceremony in the city of Bandar Abbas, IRGC Navy commander Rear Admiral Alireza Tangsiri said that three models of drones, vertically-launched Sepeher, Shahab-2, and Hodhod-4, had been unveiled for the first time and would be used for reconnaissance missions.

© AP Photo / Manish Swarup
Iranian FM Zarif Warns US Not 'to Heighten Tension With Iran and Bully Others to Follow'
In late May, Iranian Air Force (IRIAF) commander Mohammad Zalbeigi told the country’s Mehr News Agency that the creation of a new domestically-made warplane is just a matter of time, despite the burden of the US’ anti-Iran sanctions.

He recalled that the Iranian-made fighter jet Kowsar is already in service with the country's air force, something that Zalbeigi said can be seen as an example of the IRIAF’s progress.

The roll-out of the Iranian-made robotic vehicle comes amid increasing Tehran-Washington tensions, which were exacerbated on 3 January, when top Iranian General Qasem Soleimani was assassinated in a US drone strike on his car near Baghdad International Airport, which was authorised by President Donald Trump.

The tensions have been in place since POTUS announced the US’ unilateral exit from the 2015 Iran nuclear deal, or the Joint Comprehensive Plan of Action (JCPOA), in May 2018, also reinstating harsh economic sanctions against the Islamic Republic. The move prompted Tehran to start scaling down its JCPOA commitments exactly a year later.

Iran Has ‘Smart, Pinpoint, Electronic Weapons’, is Ready for Wars of the Future, Top Commander Says