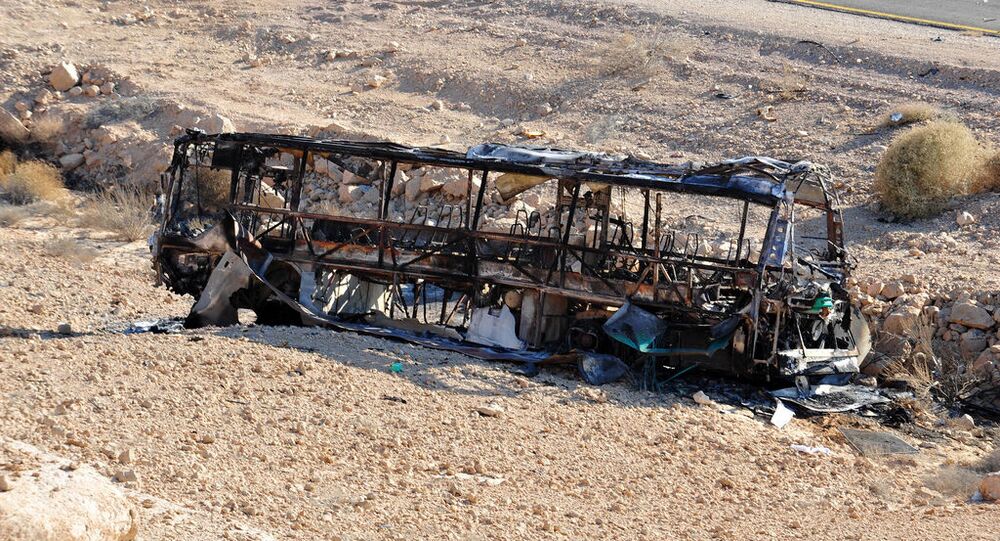 Israeli Man Who Lost His Mother in Palestinian Suicide Attack Opens Up About His Loss, Anger & Pain

It has been 20 years since the onset of the Second Palestinian uprising, during which Palestinian terrorists killed more than a thousand Israelis, many of whom were civilians. The IDF killed over 3,000 Palestinians throughout the 2nd intifada.

It happened 17 years ago, but Yoel Schwartz, a native of Jerusalem, remembers it as if it were yesterday.

It was a hot August of 2003, three years into the Second Intifada, when Palestinian suicide attacks had already become a part of Israel's reality.

© AP Photo / Majdi Mohammed
By Responding With Force to 2nd Intifada Israel 'Won the Battle But Lost the War' - Ex-IDF Commander
"It was a day before I was supposed to enroll into a high-profile yeshiva [religious school - ed.] and my mom, who wanted to pray for my success, decided to go to the Western Wall, just as she did every day."

Although she did reach her destination, Liba Schwartz never returned home.

On her way back, the 57 year-old boarded bus number 2 and moments before she was supposed to disembark it, a Hamas militant disguised as an Ultra-Orthodox man entered it, detonating an explosive belt that killed Liba and 22 others. 130 more people were wounded in that attack.

"I heard that explosion and turned on the radio but at that point there were still no reports. I felt something was off and tried to call her repeatedly but she wouldn't answer," Yoel recalls.

What followed after was total chaos. When the first reports of the attack emerged, Yoel and his family were phoning Jerusalem's hospitals and the police in order to find traces of information that would shed light on what had happened to Liba.

But as time went by and hospitals that received patients didn't have her name in their lists, Schwartz realised that Liba was no longer among the living.

"My mom was standing closest to the terrorist and when he exploded, her body was ripped into pieces. Authorities managed to establish her identity only thanks to the earrings she was wearing."

Feelings of Pain and Anger

Yoal and his twin sister were 16 when they lost their mother. Back then, he says, he didn't feel anger and didn't point the finger of blame at anyone for the loss he had suffered.

"I was so absorbed by the loss and I could barely function. Thankfully, the state supported us and provided us with financial and psychological assistance and I can safely say that it is thanks to that help that I managed to stand on my feet," Yoel explains.

However, as time went by, he became more angry. Just like many in Israel, Yoel struggled to understand why Palestinian terrorists receive money from Israeli taxpayers, why streets are still named after those who had murdered innocent civilians and why Israel still doesn't have the death penalty for such offences.

"The fact that that terrorist, who assisted the suicide bomber who murdered my mom, is getting money for his deed and enjoys comfortable conditions in an Israeli jail, boils my blood. Not only didn't it make any sense, but it also didn't create any deterrence and that meant that our citizens could be easy prey for similar attacks," he complained.

Over the years, Israel has made repeated attempts to change that equation. Bills that supported a death penalty for terrorism have been put forward for a Knesset vote on a number of occasions. But those bills have never been passed into law, partially because of disagreements with the security apparatus, which disapproves of the move, and partially because of the political motives of Israel's parties.

© AFP 2021 / AWAD AWAD
From Foe to Friend: Ex-Spy Recollects 2nd Intifada, the Recruitment of Agents and a Rebel 'Prince'
Attempt have also been made to cut down on the amount of cash budgeted for Palestinian prisoners, that according to some reports stands at $9 million per year. But although Israel has implemented some measures, inmates in Israeli prisons still receive monthly salaries, to the dismay of the Israeli public.

Looking at normalisation agreements Israel is now inking with Arab states, Yoel says he is hopeful that the same will happen with the Palestinians, although he admits that the situation with them is much more complex.

"There are good people everywhere. There are Palestinians, who also want peace. The problem is that their leadership doesn't and as long as they stand at the helm, I doubt we will see a breakthrough in that regard."