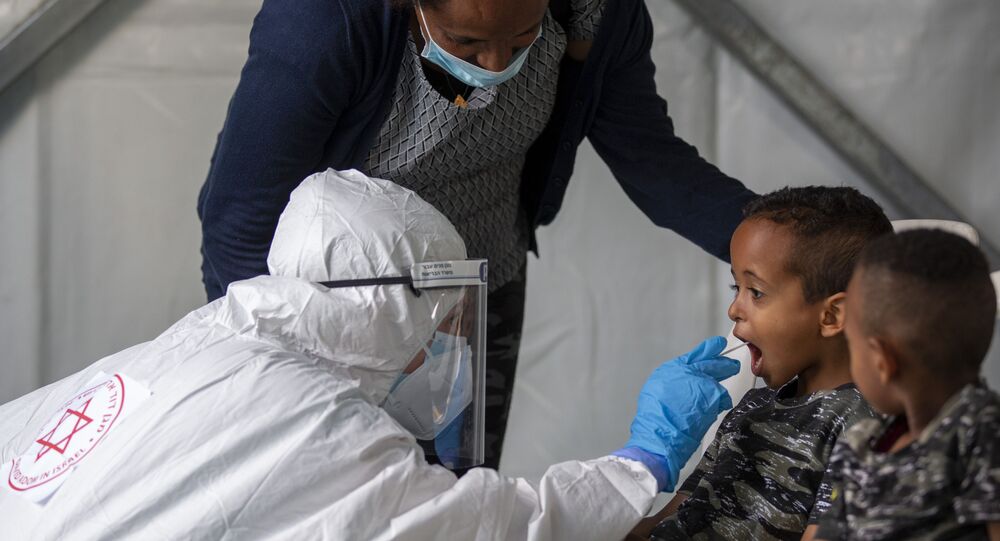 While some embraced the decision of the government to close down the country, saying it was Israel's only chance to decrease the number of COVID-19 patients, others have slammed the move. The reason for this is Netanyahu's alleged inability to offer them financial assistance without which, they say, they won't be able to stay afloat.

For many Israelis, it feels like deja vu. Three months after the country lifted its lockdown, Israel has imposed it once again in a bid to contain the spread of COVID-19 that has claimed the lives of more than a thousand people.

Getting Out of Control

Numbers of newly-reported infections continue to rise, with Tuesday registering the highest daily number so far - more than 5,000 people, and the country, which once was considered a leader in tackling the pandemic, has now taken first place in the world in the number of positive COVID-19 cases reported per capita, per day.

© REUTERS / AMIR COHEN
A Jewish worshipper prays the morning prayer outside a residential building before Israel will enter a second nationwide lockdown amid a resurgence in new coronavirus disease (COVID-19) cases, forcing residents to stay mostly at home during the Jewish high-holiday season, in Ashdod, Israel September 18, 2020

As a result, many drive-ins across the country that were set up to test people for the virus are overcrowded, causing traffic jams and frustration, while hospitals in Jerusalem and in the north are overloaded with coronavirus patients and collapsing under pressure, and have been forced to transfer people who seek help to medical institutions in the centre of the country.

© CC BY-SA 3.0 / Gellerj / Israel Police squad car
Total of 1,000 Israeli Police Officers to Monitor Enforcement of COVID-19 Lockdown
That's why the decision to impose restrictions and close down the country, including schools and private business, was met with understanding by some Israelis, who expressed their support for the government's decision on social media platforms.

"We don't want to die and we don't want our elderly to die... I agree with the full lockdown on the country. No exceptions, everything should be closed: synagogues and restaurants and of course pools and gyms that are the most contagious; no demonstrations should be held...," wrote one tweep.

"A lockdown is our only chance to regain the control that we lost over the pandemic. The collapse that we see now on the horizon has started during the vacation period...," another person wrote.

The last weeks of August are considered to be "family time" in Israel, a time when families typically go abroad. Now, with the airport barely functioning, most Israelis vacation within Israel, very often neglecting the precautions pronounced by the Ministry of Health.

In fact, Israel's public has been accused on a number of occasions of not adhering to the regulations put forward by the various bodies tasked with handling the disease.

Since the outbreak of the pandemic in late February, Israeli media has registered multiple incidents, showing crowds gathering at parties, demonstrations and weddings, people not wearing masks on public transport and businesses opening up despite bans.

But many tweeps, who disagree with the need to impose a national lockdown, downplay those actions of the public and pin the blame on the government, that allegedly failed to tackle the crisis efficiently.

"Those, who think they can impose a lockdown with regulations that make no sense and without giving people any financial security are detached from reality," complained a tweep.

Similar views have also been expressed by Standing Together, an NGO that fights for equality and social justice.

"They didn't care for our living during the first wave of the pandemic. They didn't prepare the health system to the second one. They themselves didn't stick to the regulations uttered by them. And now they ignore our financial problems once again. They strangle us. They hold us cheap. They crash us. More than 1,500 have already joined us. If you want a lockdown, give us financial security," the post read.

Prime Minister Benjamin Netanyahu has long been accused of failing to cope with the financial crisis that erupted as a result of the pandemic.

Although the government did hand out individual grants and offered assistance to businesses that were affected by the outbreak of the virus, for many, the packages extended were far too small to be able to keep them afloat.

That prompted mass protests against the government and its head.

© REUTERS / Ronen Zvulun
Israeli Government Allows Citizens to Go Around 1 Mile Away From Home During Lockdown
Now these rallies are making a quantum jump. Although demonstrations against the PM are expected to decrease significantly during the time of the lockdown, protesters plan to put up signs on businesses that were shut down because of the pandemic, with the photo of the PM who is accused of mishandling the crisis that caused some 500,000 Israelis to lose their jobs.

The national lockdown is expected to start on Friday at 2 pm local time, and will last for at least two weeks.

If it proves to be efficient, Israel will start to lift measures gradually, imposing local lockdowns on towns and cities still considered 'red zones', with high numbers of positive patients.

If not, the government is likely to extend the lockdown until the graphs of the health ministry show that the situation is finally under control.