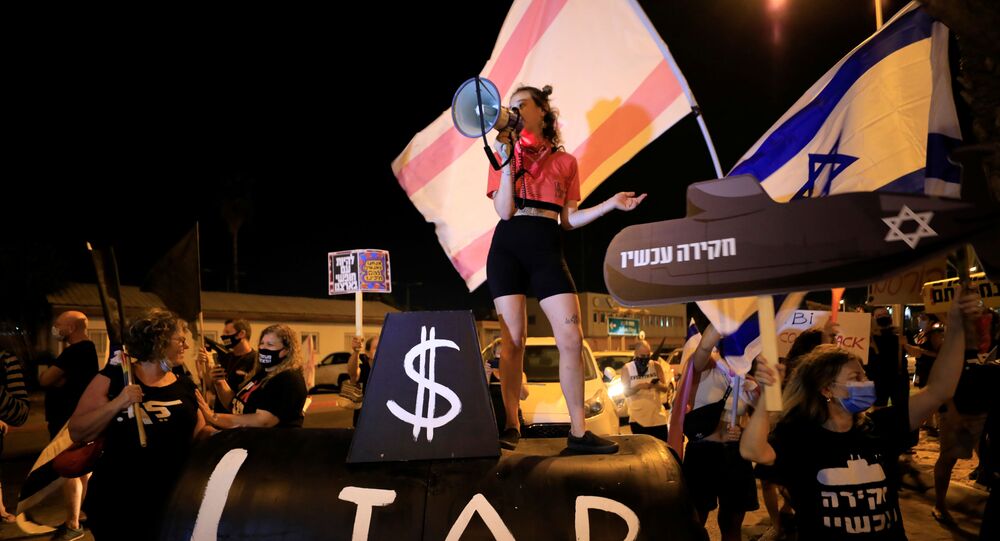 TEL AVIV (Sputnik) - Protesters have gathered at the Ben Gurion airport in Tel Aviv as Israeli Prime Minister Benjamin Netanyahu is set to depart to the United States for the signing ceremony of landmark peace deals with the United Arab Emirates and Bahrain, a Sputnik correspondent reported on Sunday.

Earlier in the day, Netanyahu announced a new three-week nationwide lockdown beginning this coming Friday due to resurgence of coronavirus cases.

"Netanyahu is indicted in several cases, but he chooses to lock down the country for three weeks — which is madness — and leave for the United States," a female participant of the protest told Sputnik.

Protesters drive cars to the airport entrance to block the way to the departure terminal. Some of them brought Israeli flags and black placards, other are chanting slogans such as "Netanyahu is criminal minister" and "We demand investigation now."

On 13 August, Israel and the UAE agreed to normalize ties, which among other things entailed Israel giving up its annexation plans in the West Bank. The deal was brokered by the United States. The expectation was that the other countries of the region would follow the lead.

A month later, on 11 September, King Hamad bin Isa Al Khalifa of Bahrain officially agreed to a similar deal in a trilateral phone conversation with US President Donald Trump and Netanyahu.

The signing ceremony for both agreements is scheduled to take place on Tuesday in Washington.

Netanyahu has been probed within simultaneously several cases on corruption and bribery for a few years now, the reason why he had to abandon all ministerial posts but premiership amid Israel experiencing a lengthy political power crisis last year with three snap general elections in one year.