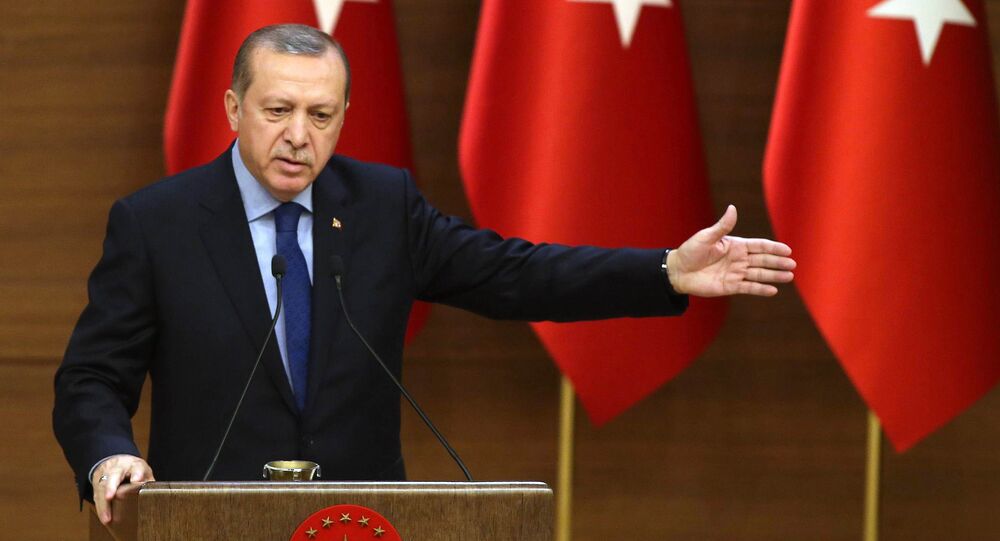 Tensions between Athens and Ankara spiked early last month, after the Greek Foreign Ministry urged Turkey to immediately stop "illegal" oil and gas drilling activities in the eastern Mediterranean, warning that Athens would defend itself if necessary.

The warning came after Macron urged the EU on Thursday to adopt a “united and clear voice” with respect to Turkey, accusing Ankara of “no longer [being] a partner in this region” due to its recent actions in the Eastern Mediterranean and its involvement in the Libyan civil war.

“We Europeans need to be clear and firm with the government of President Erdogan which today is behaving in an unacceptable manner”, Macron told a summit of EU Mediterranean states, calling on Brussels to outline “red lines” with Turkey while simultaneously working to “restart a fruitful dialogue”.

Macron also clarified that the EU “must be tough with the Turkish government and not with the Turkish people, who deserve more than the Erdogan government.” According to the French president, “our goal is to avoid all escalation, but avoiding escalation should not mean passiveness or acceptance”.

The Turkish Foreign Ministry responded by describing Macron’s comments as “arrogant,” and claiming that they were a “reflection of his incompetence and despair.”

“Macron is jauntily attacking our president every day as we have disrupted their dirty games and dashed their sneaky plans in foreign influence”, the ministry declared, suggesting that Paris has no authority to define maritime jurisdiction in the eastern Mediterranean.

This followed Turkish Defence Minister Hulusi Akar criticising alleged French interference in the Turkish-Greek dispute in the Mediterranean, arguing that Paris was acting like ‘Mafiosi’. Akar added that Ankara would not stand for someone coming "from thousands of kilometers away" and trying "to bully, claim rights and play the role of a guardian angel”.

A conflict between Turkey and Greece over exclusive rights for oil and gas exploration in the Eastern Mediterranean escalated last month, when Greece signed a maritime agreement with Egypt to designate large areas of the Mediterranean as its exclusive economic zone.

© AP Photo / Greek National Defence
Shelf of Discord: Greece and Turkey Should Appeal to International Court, Analyst Says
On learning of this, Turkey sent its Oruc Reis oil and gas surveying vessel to an area claimed by Greece and started searching for fossil fuels.

The Greece-Egypt accord was inked more than six months after Turkey and the Ankara-backed government in western Libya clinched a maritime delimitation deal in December 2019 to claim large sea areas also claimed by Athens.

Brussels rejected the Ankara-Tripoli agreement, which it notes “infringes upon the sovereign rights of third states” and “does not comply with the Law of the Sea”.