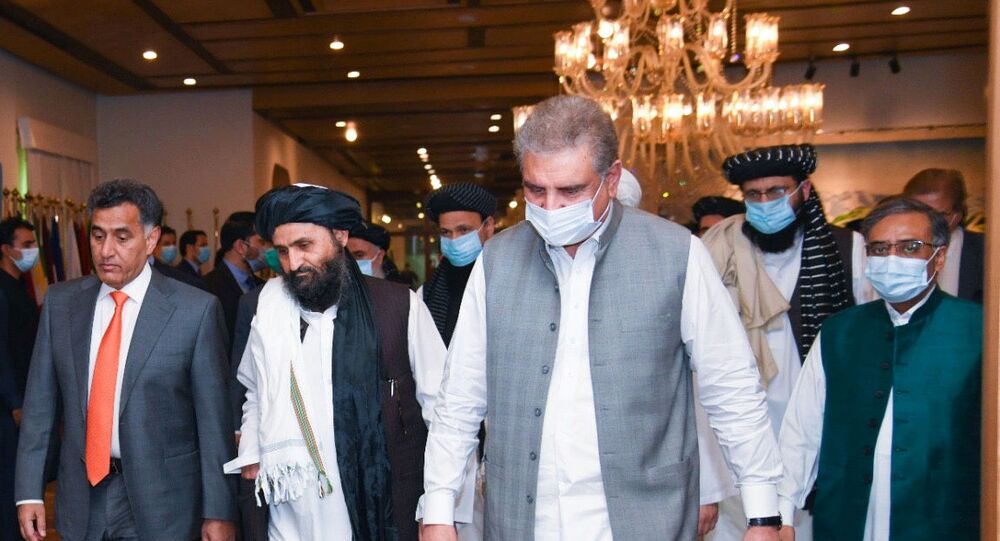 MOSCOW (Sputnik) - After months of delays, the Afghan government and the Taliban will open “historic” peace talks in the Qatari capital of Doha on Saturday, with the hope that the negotiations will bring the country’s long-running conflict to a conclusion.

Since being overthrown in 2001 after the invasion of US forces, the Taliban have refused to negotiate with the Afghan government, choosing instead to hold talks with representatives from Washington.

A landmark peace deal signed between the militant organization and the United States on 29 February set the stage for intra-Afghan talks, although the staging of negotiations would rest on both sides complying with a prisoner exchange agreement.

Sources in the Afghan presidential administration told Sputnik on Thursday that both parties had agreed to begin talks on Saturday. This was later confirmed by the Qatari Foreign Ministry and officials from the government and the Taliban.

Mike Pompeo, the US secretary of state, has already arrived in the Qatari capital to attend the talks, describing them as a “historic opportunity for Afghanistan” to bring “four decades of war and bloodshed” to an end.

The intra-Afghan talks have been delayed multiple times, as both the government in Kabul and the militant organization have disagreed over the ongoing release of prisoners. In that time, the Taliban have continued to target civilians in bomb blasts and conduct ambushes on military outposts. The Afghan military has also continued its attempts to neutralize members of the militant group.

The peace talks are expected to be wide-ranging, and the international community will be keen observers. The Afghan government and the Taliban will address the possibility of ensuring a long-lasting ceasefire, issues related to the country's constitution, and a range of social matters, including women's rights.

Both parties have managed to arrive at the negotiating table, but it remains to be seen if they will come to any sort of agreement.

The United States, led by special representative for Afghanistan Zalmay Khalilzad, and the Taliban agreed on their own peace deal in Doha on 29 February.

At that time, the US said that the agreement would pave the way for the withdrawal of its troops from Afghanistan within 14 months. The number of US soldiers in the country fell to a reported 8,600 in July, and another 4,000 troops are expected to leave in the fall.

On Friday, Khalilzad told reporters that the upcoming negotiations will be the first time in four decades that “Afghan-owned and Afghan-led talks” will take place, expressing his hope that they will lead to a “political roadmap to end the protracted war” in the country.

As part of the US-Taliban peace deal, the militant organization agreed to free 1,000 government and military personnel in return for Kabul’s release of 5,000 Taliban detainees.

Multiple disagreements have taken place throughout this process. The Afghan government hesitated over the release of some 400 prisoners whose crimes were deemed to be severe, and Kabul has also claimed that several of the released detainees returned to arms with the insurgent movement.

The government has also accused the Taliban of purposely detaining civilians who were then later released as part of the exchange.

Heading into this week, the Afghan government was still required to release six prisoners in order for talks to begin. The governments of France and Australia had both expressed their concern over the release of the Taliban members, who stand accused of killing citizens of the two aforementioned countries.

On Thursday, the six Taliban prisoners left Kabul bound for Doha in order to complete the prisoner exchange process, which in turn, has allowed the crunch talks to begin on Saturday.

Officials from neighboring countries, and the wider world in general, have all expressed their hope that the Afghan government and the Taliban will be able to find common ground.

In an exclusive interview with Sputnik, Pakistani Foreign Minister Shah Mehmood Qureshi said that a peace settlement in Afghanistan will have a positive impact on the rest of the region.

"We wish them success because we are interested in a peaceful and stable Afghanistan. If things improve in Afghanistan, they'll have a direct positive impact for Pakistan. When things deteriorate there, we get affected," Qureshi said after Thursday’s meeting of the Shanghai Cooperation Organization's foreign ministers.

A peace agreement will allow Afghanistan to unlock its potential and focus on several key infrastructure projects, such as the Turkmenistan–Afghanistan–Pakistan–India gas pipeline, the foreign minister stated, adding that it was imperative that the peace process was led by the Afghan people.

“It's up to the Afghans. It's their future. They have to decide what kind of political dispensation they want. They have to sit and bridge the trust deficit. They have to build an understanding. After all, sides that will be sitting across the table are Afghans," Qureshi stated, adding that Russia had also played a key role in efforts to reach a peace agreement in Afghanistan.

NATO Secretary General Jens Stoltenberg on Friday also expressed his hope that the talks in Doha lead to tangible results, stating that Afghanistan is now “closer than ever to peace.”

Despite reassessing its military presence in Afghanistan, Stoltenberg said that NATO will continue its training missions in the country, in order to ensure that Afghanistan does not become a “safe haven for terrorism” once again.

Can Common Ground Be Found?

After four decades of hostility, few are expecting the talks in Doha to be free from conflict and disagreement.

Abdul Hakim Haqqani will lead the Taliban’s 21-person negotiating team in Qatar. A selection of government and opposition officials will represent the Kabul administration at the talks.

Acting Afghan Foreign Minister and a member of the government's negotiating team, Mohammad Haneef Atmar, told Sputnik on Friday evening that the Taliban have given their assurances that a potential ceasefire would be the first issue discussed during Saturday's talks.

It remains to be seen if any potential ceasefire agreed at the negotiating table could be implemented in Afghanistan. Saturday's planned talks were thrown into doubt on Wednesday after Amrullah Saleh, the Afghan vice president, was targeted in an assassination attack in Kabul.

Multiple civilians died in the blast, although the vice president survived unscathed. Taliban spokesman Zabihullah Mujahed issued a statement saying that the militant group was not involved in the incident.

Outside of the capital, the Afghan military and the insurgent organization remain in conflict. Earlier on Friday, the Taliban killed 16 servicemen in the eastern province of Nangarhar after launching an attack on positions held by the armed forces, a local source told Sputnik.

The armed forces have also continued to conduct operations against the militant group, and at least 22 insurgents were killed by airstrikes in the province of Khost overnight, Adil Haider, a spokesman for the Khost police chief, told Sputnik.

Should both sides reach a lasting ceasefire, there is a lingering question over how former insurgents would be integrated into Afghan society. There are also concerns over how the Taliban’s radical views can function in a parliamentary democracy.

Another major challenge facing both parties is the Taliban’s long-running unwillingness to recognize the Afghan government as the country’s ruling body, which could impact any potential power-sharing agreement in Afghanistan.

During their period of rule from 1996 to 2001, the Taliban regime was notoriously oppressive towards women, who were banned from working and receiving an education.

Ahead of the negotiations, the militant group has said that it is not against women receiving an education, as long as it takes place within the limits of Islamic law.

Back in March, Farida Hamidi, a member of Afghanistan’s lower house of the National Assembly, told Sputnik that the Taliban’s views have changed since the time it held power more than two decades ago.

“Afghan women should be active in all fields and we will defend the rights of women to the full extent,” the lawmaker said at the time.

Both the Afghan government and the Taliban will go into the talks hoping that the other will make vital concessions. The peace process has been volatile and fraught with mishaps over the preceding months and years, and the people of Afghanistan have paid the price for this.

The future of Afghanistan’s political, economic, and social landscape rests delicately in the balance at the negotiating table in Doha.

At Least 37 Million People Displaced by US War on Terror, Study Finds