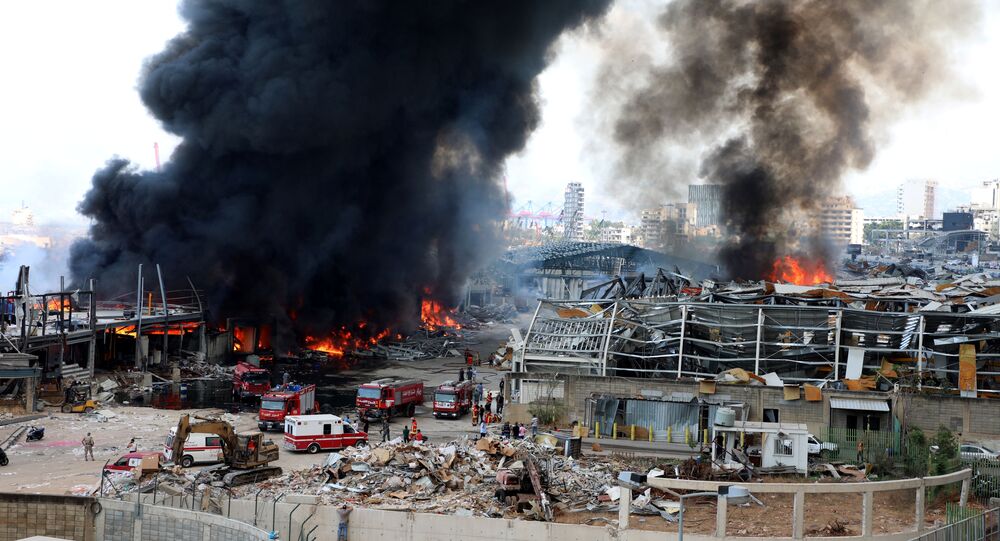 BEIRUT (Sputnik) - The Lebanese Supreme Defence Council demanded on Thursday that all the information on what is being stored in the warehouses in the port of Beirut be disclosed following a new fire incident there.

Earlier in the day, the fire started in a warehouse with motor oil and tires, a little more than a month after the powerful blast at the port. It took several hours to contain the blaze.

"The Council demanded that the authorized bodies and the administration of the port of Beirut clarify information about what is stored in the port's warehouses at the moment, and make these data public," the Council said in a statement obtained by Sputnik.

It added that by disclosing such information it would be possible to avoid catastrophic incidents in the future.

Lebanese President Michel Aoun said during the meeting with the Supreme Defence Council that the fire could have been a result of arson. Prior to that, Labor Minister Michel Najar said that the cause may have been a careless use of a grinder during repair works.

In the meantime, according to Fabrizio Carboni, the International Committee of the Red Cross’ director for the Near and Middle East, there are 500,000 liters (132,000 gallons) of oil stored in the warehouse.

"Shocking images from the port of Beirut. The warehouse on fire is where @ICRC_lb stocks thousands food parcels and 0.5 million L oil. The extent of the damage still remains to be established. Our humanitarian operation risks to be seriously disrupted," Carboni wrote on Twitter.

Less than a month ago, the same port was shattered by a blast. The explosions rocked the port and the city, killing 190 people, injuring many others, knocking down or damaging houses and vehicles. The blast is believed to have been caused by improper storage of ammonium nitrate. The explosion drew international attention and offers of help.