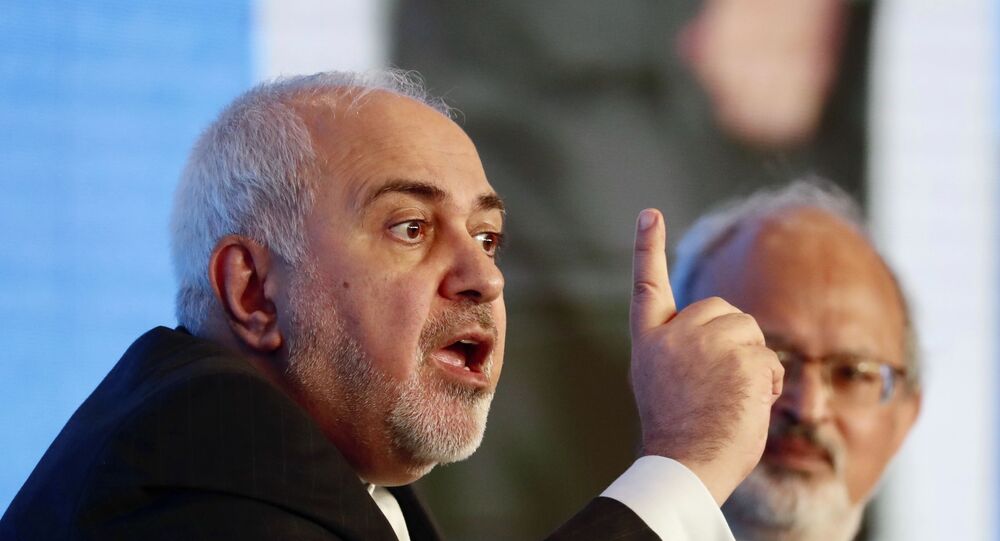 The Trump administration has harshly attacked Iran’s nuclear power generation programme and missile development in the past. In May 2018, the US unilaterally left the Joint Comprehensive Plan of Action agreement, a move that was slammed by Tehran and the other signatories of the deal.

The US insists Iran must not:

The top diplomat added that the United States takes part in building “secret ‘new’ nukes” and flooding countries in the Middle Eastern with hundreds billions of dollars-worth of arms while insisting that Iran “must not” purchase or build defensive missiles. To illustrate his point, Zarif attached images of two recent news articles to his post. One a Washington Post article from 9 September, which revealed that the United States Air Force had awarded a $13.3-billion contract this week for the engineering and development of nuclear missiles.

Another image was a screenshot of a CNN article that quoted an excerpt from the forthcoming book “Rage” by veteran Washington Post reporter Bob Woodward, who argued that US President Donald Trump once boasted to him that he had “built a nuclear-weapons system that nobody’s ever had in the country before”. According to Woodward, this statement was confirmed by other sources but people familiar with the matter were actually surprised that POTUS had disclosed such sensitive info.

JCPOA and Arms Trade in the Middle East

Last year, Zarif said that in 2019 the Western countries sold “1,000 billion dollars’ worth of weapons” to the powers in the Persian Gulf. According to the data by the Stockholm International Peace Research Institute (SIPRI), Saudi Arabia became the world’s largest importer of arms during 2015-19 and more than 70% of these imports were from the United States.

Meanwhile, Washington strongly opposed the development of Iran’s nuclear programme, accusing the country of violating the Joint Comprehensive Plan of Action (JCPOA) that was signed in July 2015 by Iran, China, Russia, United States, France, Germany, the EU, and the United Kingdom. Under the deal, Iran agreed to cut its stockpile of low-enriched uranium and completely eliminate its stocks of medium-enriched uranium. However, in May 2018, in response to Israeli intelligence reports, Trump administration unilaterally pulled out from the nuclear deal and re-imposed sanctions on Iran, which were set to impede the country’s international trade ties.

Tehran called on other signatures to the deal to help preserve it and safeguard the Islamic Republic from US sanctions, but according to Iranian officials, this has been to no avail so far.

According to the statement from White House Press Secretary Stephanie Grisham released in summer 2019, Iran “was violating” the JCPOA apparently even before the deal’s existence.

The United States has also insisted that Tehran has also been in violation of a UN arms embargo which is set to expire in October, and pushed for its extension in order to prevent Iran from buying defensive equipment from other countries - but failed to get a necessary support. In August, President Trump told journalists that Washington will then restore all snapback sanctions against Iran in a month time after its note would be received by the United Nations.