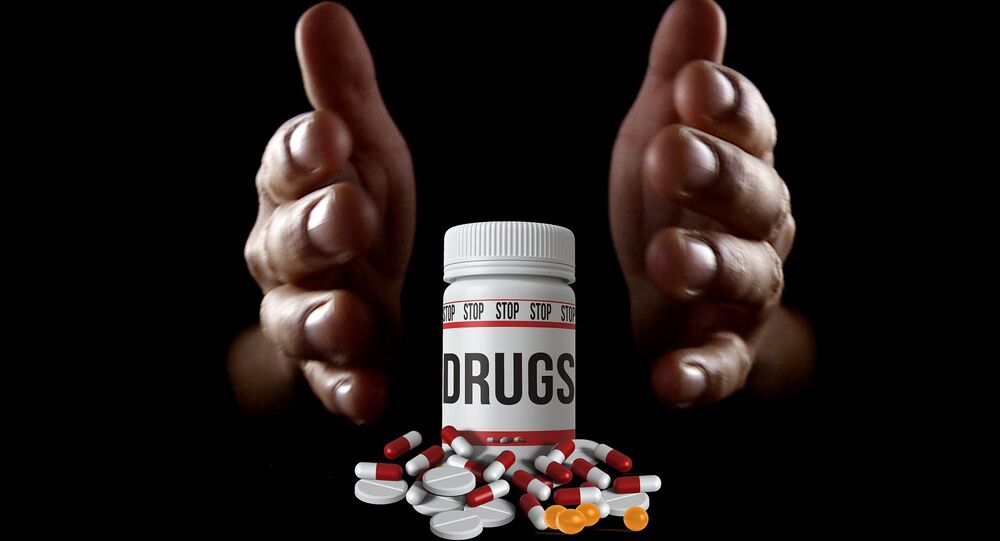 To Escape Harsh Reality, Some Gazans Opt for Drugs Despite Fear of Life Sentence or Death Penalty

Hamas authorities impose harsh penalties on those who dare to consume or sell drugs, says an official. But a drug addict and a dealer, who spoke to Sputnik on condition of anonymity, say they didn't have any other choice, given the Strip's dire economic conditions.

'My Own Fantasy World'

The father of six says he started using Tramadol, an opioid pain medication that's relatively easy to obtain in the Palestinian enclave, back in 2010, after battling depression while unemployed.

"I used to be a Palestinian Authority employee but I lost my job in 2007, when Hamas took over the Strip," said the man, referring to the bloody events that led to the ouster of Fatah officials from Gaza.

"After being jobless for some time, I came across Tramadol. Friends suggested to try it and said it would help me to forget about the situation. And it did, it let me live in my own fantasy world."

But it also pushed Ahmed into a financial abyss that only got deeper with time.

Being jobless, Ahmed says he needed to lie to his family and friends to obtain the money that he would use to buy the drug.

"Initially, when I still had money, I used to spend it on getting the drug but when my financial situation deteriorated, I started to borrow it from my friends and brothers under the pretext that I needed to buy food for my family."

Ahmed is not the only one. Already in 2008, news reports suggested that up to 30 percent of males in Gaza aged between 14 and 30 had been using Tramadol on a regular basis, with some 15,000 people showing signs of addiction.

In fact, the drug became so popular that it has swiftly turned into a hot commodity on the Gaza Strip's black market, and Shadi, who agreed to speak on condition of anonymity, says it has provided him with a relatively good income.

"Of course it depends on the month. Each pill sells for around $6. Sometimes I can earn up to a thousand dollars; at other times I get nothing."

To obtain the drug, Shadi either goes to the local black markets or directly to suppliers, who smuggle it through tunnels that connect Gaza to Egypt or who bring it from Israel via the Kerem Shalom and Erez crossings. Although he admits the income he gets is not stable, he says he has no intention of giving up his business.

"I have four kids and my wife is pregnant. I also work as a taxi driver but that money is not enough and at the end of the day I need to take care of my family and put food on the table," he explains.

Gaza's economic situation has deteriorated following the blockade imposed by Israel soon after Hamas, which was deemed a terror organisation, took control over the Strip.

As a result, unemployment in the enclave skyrocketed, and many were pushed into the poverty circle that only widedened with the outbreak of COVID-19 and ensuing fiscal crisis.

Shadi is aware of the strict Gazan law that prohibits the selling of drugs and knows he might face life imprisonment or even a death penalty if he is caught, but says the fear of losing an income and of seeing his family starving is much stronger than the prospect of jail.

© AFP 2021 / Gil Cohen-Magen
As Gaza Rockets Subside, Southern Israeli Community on Verge of Lockdown Amid COVID-19 Case Spike
Others, however, were deterred by the possibility of spending life in prison and Ayman Al Batniji, the spokesman of Hamas, says authorities have managed to curb the threat of the drug crisis.

"In the past it was a big problem," said Al Batniji, alluding to the years of 2008 and 2009, when drug crime was at its peak, with more than 1,200 reported cases, half of which were Tramadol-related.

"Over the years, we managed to overcome this difficulty, conducting raids, arresting major drug traffickers, and applying harsh penalties on those who dared to break the law and explaining to the masses the repercussions of their addiction. And I think we finally see the fruits of these measures," concluded the official.

But reports show otherwise. In 2016, for example, it was suggested that Gaza (which has a population of about 1.8 million) had 200,000 addicts, and Ahmed said the steps taken by the government were not effective enough to stop the phenomenon from spreading.

However, Ahmed says, he's had enough and wants to get out of that vicious cycle.

"My youngest daughter found my Tramadol pills in a closet and swallowed a good portion of the drug. Doctors have managed to save her but for me that was a trauma, and now after I lost my health, my income and my normalcy, I want my life back and I am determined to put an end to that addiction."