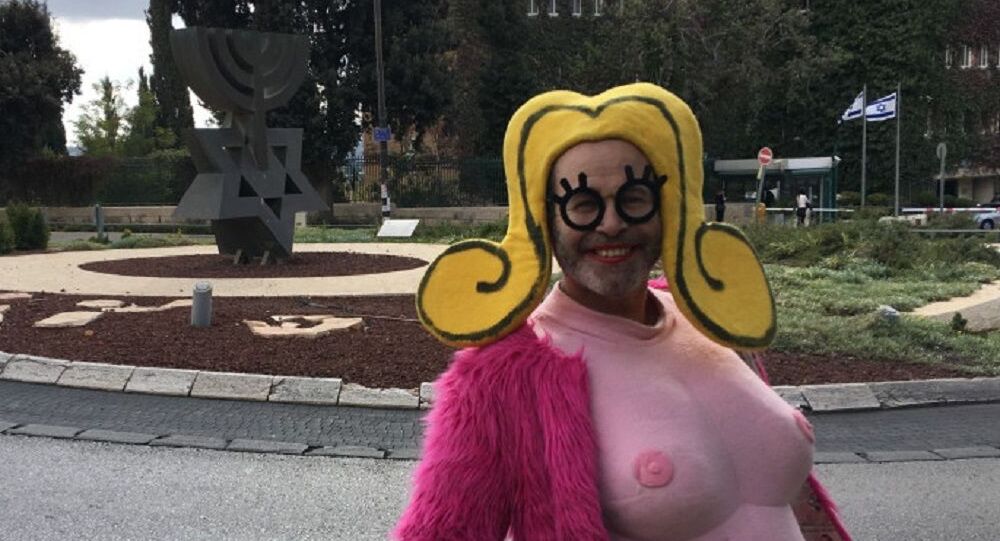 Protesters have been taking to the streets of Jerusalem for almost two months calling for Prime Minister Netanyahu's resignation amid an economic crisis caused by the coronavirus pandemic and notorious corruption case involving the prime minister and several individuals close to him, including his wife.

Engelmayer, portraying a character he dubbed Shoshka, told the local media that he was detained outside the PM's residence on Balfour Street over "sexual harassment of the public". According to the artist, police officers claimed that he was dressed as Sara Netanyahu, the prime minister's wife, who had previously complained about phallic balloons and other obscene objects protesters carried at a demonstration near the prime minister's residence in August.

The police released the demonstrator later the same day, but the artist complained that the police had forced him to strip naked while they were searching and questioning him.

"I explained to them with frustration that this is what art is like, that it tests boundaries, that this is free speech", Engelmayer said. "It's very frustrating because there is no understanding there what protest is and what free speech is".

Anti-government protests in Israel have been going on for weeks, with demonstrators calling for Netanyahu's resignation amid an economic crisis caused by the coronavirus pandemic.

Additionally, the prime minister and top-ranking officials have been embroiled in a long-standing corruption scandal. Netanyahu, in particular, is accused of illegal lobbying for positive media coverage, corruption, and bribery, among other things.