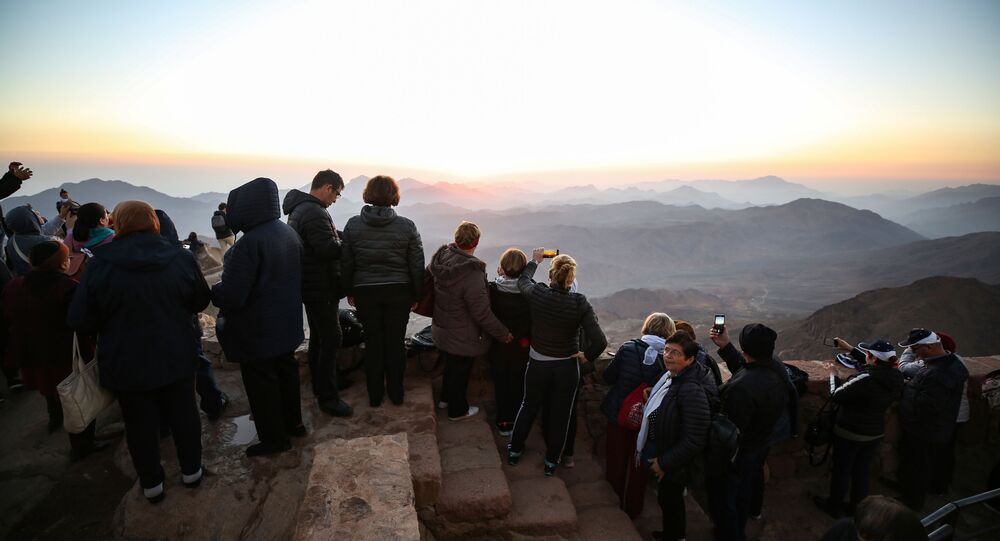 While Israel's border with Egypt has remained closed since mid March as a result of the raging pandemic, a group of Israelis are fighting for it to open, claiming the Jewish state's decision to seal the crossing was politically motivated and had nothing to do with health concerns.

Israel has been registering high numbers of coronavirus cases for three days in a row with Thursday seeing more than 3,000 new patients, the highest since the outbreak of the pandemic in late February.

In an attempt to curb the spread of the virus, Israel's coronavirus cabinet, which was established with the aim of containing the disease, met on Thursday to mull over measures that could stop the pandemic from spreading.

These include shutting down businesses, schools and public institutions in so-called red zones, towns where the amount of patients has been on the rise; and a full lockdown of 30 cities that have been struggling to contain the spread of the deadly virus.

Another measure is the decision to keep Israel's borders largely closed, and although the country's airport started operating in mid August, allowing a limited amount of flights to destinations that were still willing to take in Israelis despite the growing number of cases, outbound tourism has significantly dropped.

One of the destinations that suffered a severe blow was Egypt's Sinai peninsula that before the outbreak of the pandemic saw nearly half a million Israeli tourists in 2019.

For Guy Shilo, an Israeli tour guide, lawyer and avid Sinai lover, the decision to close down the border with Egypt was "upsetting and frustrating".

Shilo's love affair with Sinai started long ago. Throughout the years he has organized dozens of diving lessons and set up multiple tours to the area, where people could disconnect from the world's hassles.

Even during the most turbulent times in Egypt's recent history, the tour guide continued to visit the area, despite the 2011 revolution, the rule of the Muslim Brotherhood that was hostile to Israel and the raging terror caused by Daesh* that kept many tourists, including those from Israel, at bay.

In 2015, however, things started to change, and after realising that the area was once again attracting Israeli tourists, Shilo decided to set up a Facebook page, Sinai Lovers, that now unites more than 100,000 Israelis that have a soft spot for the peninsula.

Now, however, with the borders sealed, those fans are kept out of Sinai and Shilo says that not only contradicts Israel's basic law of human dignity and liberty that permits every citizen of Israel "to leave the country" but it also goes against any common sense.

"In March, Israel decided to close down its crossings with Egypt and Jordan but the interesting thing was that they didn't seal the country's international airport. Some time later, Egypt shut down its borders too, so we didn't take any measures against that decision".

Three months down the line, however, in July, when Egypt did open its borders, Shilo was hoping that the Israeli government would let him and other Sinai lovers out, especially given the fact that the Sinai peninsula was almost free of the virus as a result of its isolation from the rest of the country, and considering the recommendations given by the Israel's Ministry of Health that didn't see any reason to keep the crossing sealed.

But instead of getting a greenlight, the Ministry of Interior dragged its feet in responding to the group’s claims and that prompted Shilo to file a petition to the country's High Court, asking its intervention in forcing the state to stick to its basic laws.

© AP Photo / Oded Balilty
Failure for Some, Success for Others: How Israeli Companies Cope With COVID-19
On Thursday, the ministry was supposed to either open the border or give a detailed explanation to why they would rather keep it close. The institution opted for the latter option.

Explaining its stance in an official letter sent to the High Court, the ministry stated that it needed to consult with a number of official bodies before making that decision.

The problem was that that list was way too long and included everything from the ministry of health and coronavirus chief Ronni Gamzu to Israel's inner intelligence agency and the country's national security council. And that meant that those who wanted to visit Sinai would need to wait longer.

"The Minister of the Interior [Arieh Deri - ed.] cites possible health repercussions, if the border with Egypt is open. But the truth of the matter is that that decision has little to do with COVID-19. It is politically motivated," said Shilo, suggesting that he and other members of his group were held as a bargaining chip that would be exchanged for banging out an approval from the government to let Jewish worshippers visit the grave of Rabbi Nachman of Uman in Ukraine, access to which has been restricted to Israelis due to the country's high infection rates.

And there is an economic reason too, believes Shilo.

Israel's tourism has suffered greatly as a result of the crisis and the southern city of Eilat, which is now receiving Israeli visitors in relatively high numbers, will suffer greatly if the borders with Egypt will finally open.

"Prices on hotels and vacation packages are way cheaper over there when compared to Eilat and that leads me to believe that the reason why the border is still closed is also economically motivated".

And while that combo of politics and economy continues to define Israel's policy, Shilo and others, who want to visit the Sinai, will need to put their passports on a shelf, waiting for better days.