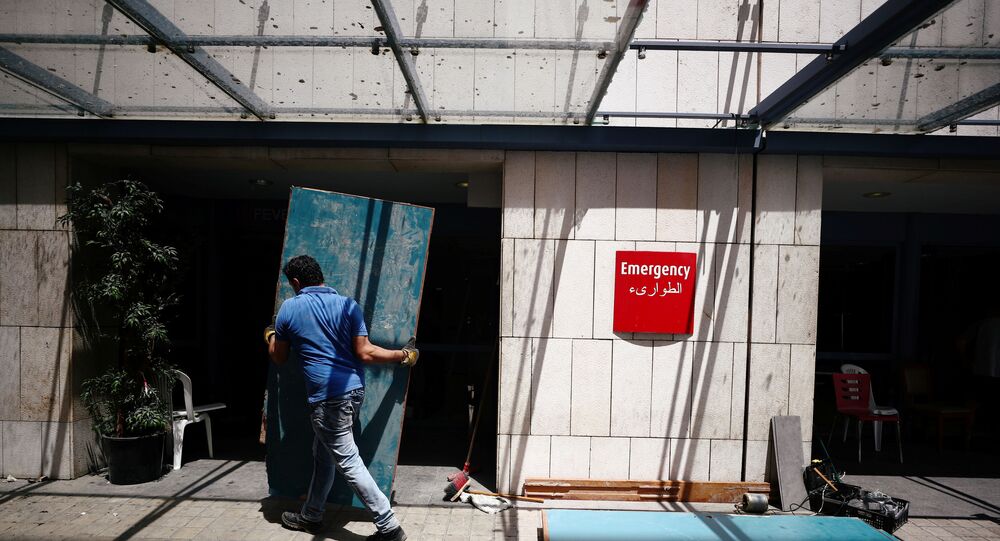 The last couple of years have been exceptionally tough for many Beirut hospitals, says the head of the critical care and sleep division at Saint George Hospital in Beirut. The COVID-19 outbreak, followed by the deadly explosion, has crippled their ability to do their job and prompted some to ask for help from the international community.

In September, Lebanon will mark 100 years since its establishment after Britain and France redrew the borders of the Middle East following their victory over the Ottoman Empire in World War I.

Things have never been easy for Lebanon. Throughout the years, the country has gone through many upheavals, including a bloody civil war and two confrontations with neighbouring Israel that inflicted heavy damage on the country.

The last couple of years have been difficult too. First, it was the events of October 2019, when masses took to the streets venting their anger against the government's policy to raise prices on gasoline and introduce taxes on the use of WhatsApp. The demonstrations eventually led to the removal of then Prime Minister Saad Al Hariri.

Then it was the outbreak of COVID-19 that widened Lebanon's economic gaps as well as pushed many into poverty and, finally, it was the deadly explosion at the Beirut port at the beginning of August that killed nearly 200 people and injured 6,000 others.

For Dr Georges Juvelekian, the chairman of medicine and head of the pulmonary, critical care, and sleep division at Saint George Hospital University Medical Centre in Beirut, this was a fatal blow.

"More than 80 percent of the hospital has been destroyed by the explosion, 17 people have been killed, including patients, medical personnel and visitors; and it is a little miracle that the numbers of casualties have been relatively low".

Comprised of 15 floors, many of which were destroyed by the blast, the medical centre, considered to be the biggest Lebanese hospital, contained more than 300 beds.

Now, for the first time in 140 years since its establishment, it barely functions and is struggling to stay afloat.

"After the explosion, the hospital stopped functioning for 20 consecutive days. It has never happened here before. We went back on track last Friday but we are far from being able to cater to the needs of all those, who are seeking medical care".

So far, the hospital has managed to restore its labs and the radiology department, it has set up 70 beds and six out of the previously available 40 intensive care units.

But what it failed to do was to restore its ability to receive and treat coronavirus-positive patients.

Before the outbreak of the pandemic, the medical complex boasted three COVID-19 sections. The first one was occupied by patients who had been diagnosed with the virus. The second was dedicated to those who came out negative, and the third was for those who were still waiting for their results.

The explosion put an end to the hospital's ability to do that separation.

"Right now we are unable to take in confirmed positive cases as that section of the hospital was completely destroyed", said Juvelekian. "It will take us three to four weeks to restore its isolation and negative pressure units".

The problem is that Lebanon doesn't have that much precious time to lose.

Last week, the country registered a spike in COVID-19 cases, as some hospitals that were damaged by the deadly blast could no longer separate between those diagnosed with the disease and those who were administered for other reasons.

In fact, conditions became so acute that former Prime Minister Hassan Diab warned that the situation might spiral out of control if the numbers of COVID-19 cases continued to go up.

No End in Sight?

But despite these warnings, authorities are struggling to offer help to the medical system that is continuing to fall apart.

"We need between $40 to $50 million to repair the damage caused by the explosion but we simply don't have the money to do so. The government is trying to do their best but their resources are limited", says Juvelekian.

Lebanon’s fiscal situation was dire even before the explosion. The country's currency has lost more than 80 percent of its value since October 2019, the deficit and national debt have continued to grow, whereas the government, crippled by US sanctions aimed at containing the influence of Hezbollah, a Shiite militia linked to Iran, has been struggling to pay them off.

The outbreak of COVID-19 only added to Lebanon’s financial insecurity. After the first virus cases were registered back in February, authorities imposed a lockdown - shut down public institutions and private businesses - measures that only paralysed Lebanon’s economy even further.

That's why Juvelekian is not counting on governmental help and asks the international community to step up efforts to keep the hospital's head above water.

"For years we have been a private institution that didn't rely on governmental funds. Now, however, we don't have a choice but to ask for help".

Foreign governments, specifically those of France, Canada, Switzerland, and a number of other nations, have already extended their assistance to Lebanon, pledging more than $250 million following the explosion.

Global bodies, including the World Health Organisation and the International Committee of the Red Cross, have also expressed their desire to help.

The ICRC, for example, has been distributing emergency medical supplies to 12 hospitals in and around Beirut and has donated wheelchairs, crutches, and mobility devices to assist those who were injured during the explosion.

In addition, the organisation has also supplied mental health support and distributed food and emergency items for people who lost their homes and belongings.

Although Juvelekian says that he and his nation appreciate the efforts by the international community, he urges the world to give more.

"I know that we have a lot of corruption and other problems in Lebanon but I can assure you that every penny that will come to this hospital will be accounted for. Of course, money cannot solve all the issues but it can definitely help to keep us afloat, especially now when many doctors and medical staff are volunteering just to make sure they assist those who need that assistance".