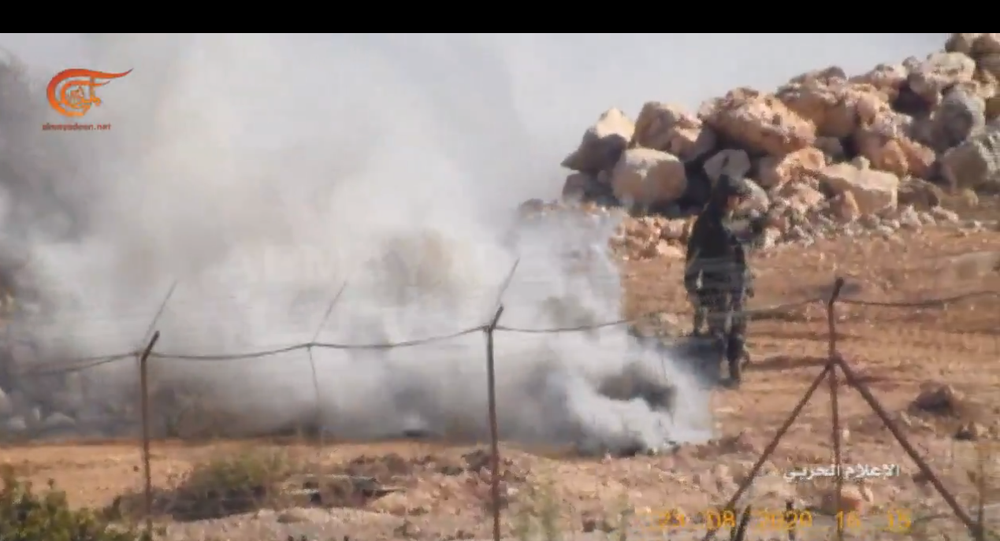 Israeli Defence Forces (IDF) claimed on Wednesday that Hezbollah had attacked the country from between two UN positions in southern Lebanon, a move described as a violation of UN resolution 1701 that calls for a ceasefire between the two countries.

The Lebanese Al-Mayadeen broadcaster released a video of what it described as an Israeli Defence Forces (IDF) soldier dummy placed on the country's border with southern Lebanon.

The broadcaster described the move as an Israeli plot to "lure the resistance to strike an imaginary target" and provoke a response.

The video, that Al-Mayadeen claimed to have obtained from military media, shows a mannequin of an Israeli soldier that appears to have been operated by a robotic device. Before being engulfed in clouds of smoke, the dummy moved near to two IDF tanks stationed nearby.

The tweet by the broadcaster reads: "It broadcasts a scene of an imaginary target placed by the Israeli occupation army on the borders with the South".

​The IDF did not comment on Hezbollah after the late Tuesday incident, when "shots were fired from Lebanon toward IDF troops". Israel said it responded with airstrikes and vowed to "continue to defend", outlining that it sees the incident as violation of the United Nations resolution 1701.

Last night, Hezbollah chose to attack Israel from between two @UNIFIL_ positions in southern Lebanon, in violation of #UNSCR1701.

It was an attempt to use @UN forces as a shield for its terror activity.

Hezbollah’s attack failed. We will continue to defend. pic.twitter.com/ursFHME2fi

​The resolution was implemented in 2006, calling for a ceasefire between the two countries. However, the border between Israel and Lebanon has recently seen an escalation of tensions, as Hezbollah said on 23 August that it had downed an Israeli drone that violated Lebanese airspace.

Responding to what Tel Aviv described as a retaliatory attack,  Lebanon’s Supreme Defense Council announced its decision to file a complaint to the UN Security Council over the Israeli airstrikes. Hezbollah leader Hassan Nasrallah described the incident as "an important and sensitive measure", but did not elaborate.

Tensions on the border have heated up after Hezbollah said that one of its members was killed in an IDF airstrike in the south of Damascus, the Syrian capital, and vowed to retaliate. Following the announcement, Tel Aviv boosted its military presence on the border.