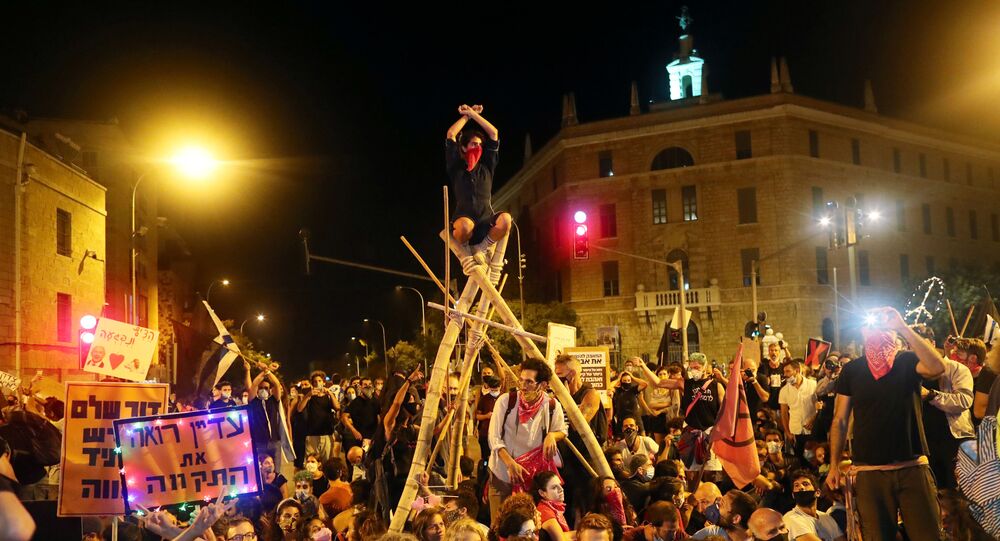 TEL AVIV (Sputnik) - Seven protesters were detained during an anti-government march in Jerusalem; one law enforcement officer was injured, according to Israeli police.

Israeli police said in a statement that one police officer was injured when a stone was thrown at him. Seven protesters were arrested. Police called for peaceful demonstrations.

On Saturday night, hundreds of protesters marched from Chords Bridge in Jerusalem to the official residence of Israeli Prime Minister Benjamin Netanyahu.

Protest marches were banned by Israeli police after clashes between anti-government demonstrators and counter-protesters last month.

The Times of Israel reported on Saturday that despite a lack of permission for the march, a total of 10,000 protesters gathered in Jerusalem on Saturday, around 1,500 of them participating in the march itself. According to the newspaper, protesters also gathered at Netanyahu’s private home in the coastal town of Caesarea. The Haaretz newspaper said that the demonstration in Caesarea had about one thousand people participating.

According to the Israeli Channel 13, police used force against protesters during the Saturday night demonstrations.

Anti-government protests in Israel have been ongoing for weeks, with demonstrators calling for Netanyahu’s resignation amid an economic crisis caused by the coronavirus pandemic.