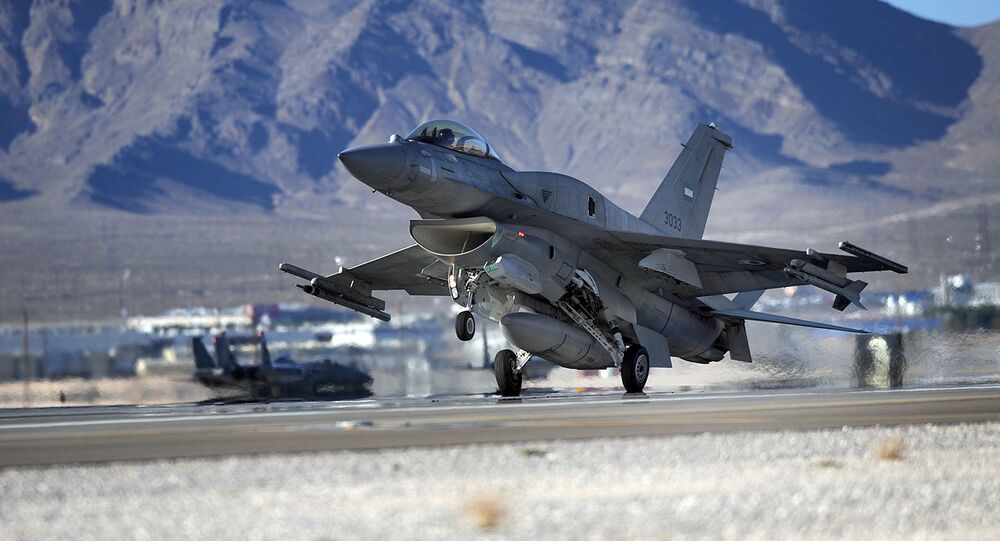 Earlier in August, the UAE hailed a deal between Egypt and Greece on their exclusive economic zones in the eastern Mediterranean as a "victory for international law". The accord was clinched amid Athens-Ankara tensions over what Greece describes as Turkey’s “illegal” drilling in the area.

The United Arab Emirates (UAE) is due to send F-16 fighter jets to the key Greek port of Souda as part of trilateral defence cooperation between the UAE, Greece, and Egypt, the state-run Greek broadcaster ERT reported on Friday.

The warplanes are expected to take part in joint military exercises in the eastern Mediterranean, ERT added without elaborating. The UAE's authorities have not commented on the matter yet.

"The signing of the maritime border demarcation agreement between Egypt and Greece is a victory for international law over the law of the jungle”, Gargash tweeted.

The remarks came against the backdrop of Greek-Turkish tensions that escalated earlier in August, when the Greek Foreign Ministry urged Turkey to immediately stop its "illegal" drilling activities in the eastern Mediterranean, warning that Athens will defend itself if necessary.

The warning followed the Turkish research ship Oruc Reis carrying out seismic survey activities in a disputed zone of the Mediterranean Sea south of Antalya and west of Cyprus.

The move was preceded by Turkish Foreign Ministry spokesman Hami Aksoy claiming that Greece's actions, specifically its "pirate agreement with Egypt" on the creation of an EEZ, violated Ankara's own continental shelf rights and “demonstrated that it was not sincere and honest about dialogue”.

“This agreement violated the right of our country and Libya to the continental shelf in the eastern Mediterranean. After that, our vessel Oruc Reis started the previously planned seismic research activity. There is no legal basis for Greece to oppose it”, Aksoy pointed out.

© REUTERS / Yoruk Isik
Turkey to Continue Seismic Drilling in Mediterranean Despite Greece's Objection, Minister Says
He was referring to a deal that Turkey and Libya clinched in 2019 to appropriate the lion's share of the Mediterranean waters that Greece considers part of its own EEZ.

Egypt, in turn, joined Greece in condemning the 2019 Turkish-Libyan maritime delimitation agreement as "illegal”, with the EU also taking Athens’ side in the dispute and slapping sanctions on Ankara over its drilling off Cyprus.